Soda tax only 'regressive' because soda bottlers would make it so

Protesters miss and/or ignore the fact that small businesses would suffer at the hands of big business, not City Hall 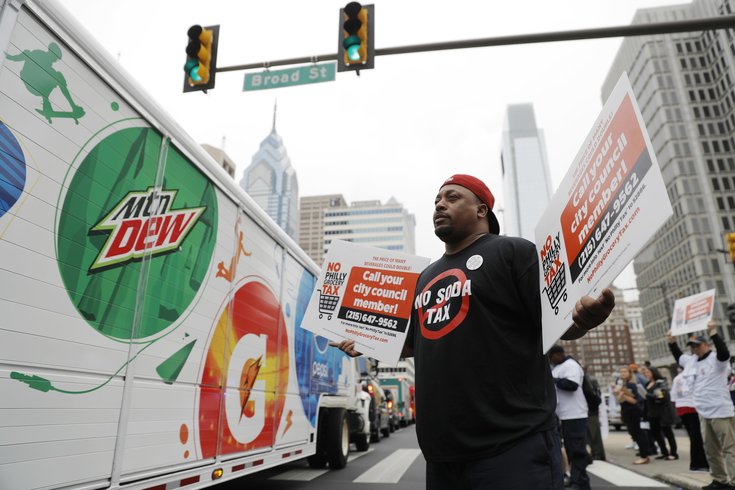 Opponents of a proposed sugary drinks tax demonstrate Wednesday, May 4, 2016, outside City Hall in Philadelphia. Former New York City Mayor Michael Bloomberg has contributed an undisclosed sum to a nonprofit group starting an $825,000 ad campaign in support of a three-cents-per-ounce tax on soda and other sugary drinks. The American Beverage Association has already spent more than $1.5 million on an anti-tax campaign.

If ever a set of people gave a human face to the internet-commentors' fan-favorite term “sheeple,” it’s the folks who gathered outside City Hall for Wednesday’s “Philadelphians Against the Grocery Tax” coalition rally.

You see, a 3-cent-per-ounce tax on sugary beverages to fund universal pre-K, parks improvements, community schools and other initiatives doesn’t extend Acme-wide. It is dedicated to a product that even super-bottler and mega-moneyman Harold Honickman admitted is geared toward poorer consumers. You want to buy something not shelved in the diabetes-risk aisle? Don’t worry. The price wouldn’t be going up.

So, I put quotes around the group’s name because the tax they rallied against isn’t a “grocery tax” in any sense outside the minds of consultants trying to convince the public to believe in false equivalences.

Yet there they were tooting their soda-truck horns, trotting out a trio of sheeply City Council members (oh, hello Jannie Blackwell, Maria Quinones Sanchez and Al Taubenberger!) and hooting and hollering the talking points – provided by Honickman’s minions – that it’s a “regressive” tax that will stifle local businesses and threaten jobs.

Listen, I get it. If watching Donald Trump take the scorched-earth approach to dismantling the Republican Party taught me anything, it’s that honest-to-goodness facts are no longer part of the public conversation cover charge.

But here I’ll sit in a tilting-at-windmills attempt to bring some much-needed reality back to the table.

On the 2011 day when City Council nixed then-Mayor Michael Nutter’s attempt to rattle Big Soda, I watched then-City Councilman Jack Kelly hoist a can of cola in the direction of the bottler baron, who stood in the back of chambers. “Cheers, Honickman fam! We did it! And thanks for your campaign contributions!” is what my mind’s-eye heard in that brief toast.

And on the 2016 day when protesters flocked to City Hall on heated budget hearing day, what I heard was this: “What can we do to help protect your profit margin, boss man?”

I respect that kind of honesty. It’s rare today.

While it makes it difficult to paint the bottler as a villain, it’s a reality that runs counter to the “Mayor Jim Kenney pushing a ‘regressive tax’” rallying cry, though.

The only reason it can be presented as such is because Honickman’s free-market manipulation has made it such.

I’m sure if I were a quadrillionaire soda mogul, I, too, would recoil at being targeted while other unhealthy profiteers escaped notice.

What I wouldn’t do is sign off on a public relations campaign that framed it as a regressive tax, because I’d know in my heart of hearts that it wouldn’t be possible unless I decided to pawn it off on others.

I’m sure if I were an elected official who used soda money to gain re-election, I’d be loathe to deny that contributor calling a chit in when they needed a legislator on stage to get the protesters all geeked up.

What I wouldn’t do is pretend the high-minded mission behind the levy actually targets mom-and-pop bodegas, because I’d know in my heart of hearts that small businesses would be spared if poor Coca-Cola Co. and PepsiCo. could just find another tax break.

This is the reality of the situation, sheeple: Whether protecting public health or school funding represents the pressing need for more loot in the city’s coffers isn’t really relevant.

Nope. What’s relevant, tax-foe sheeple, is that you’ve let yourself buy into the tenuous assertion that the soda tax is a regressive attack on poor people in the city with a perpetual poverty burden.

Again, I repeat: It would only be regressive because Honickman said he would make it such. As a businessman, that’s his prerogative, but as a writer, making sure you hear that over the din is mine. Whether you want to rethink your protest-life decisions is entirely up to you, but I’ll happily keep calling out your gullibility much longer than a truck battery and fuel tank will last while circling City Hall. Cheers!