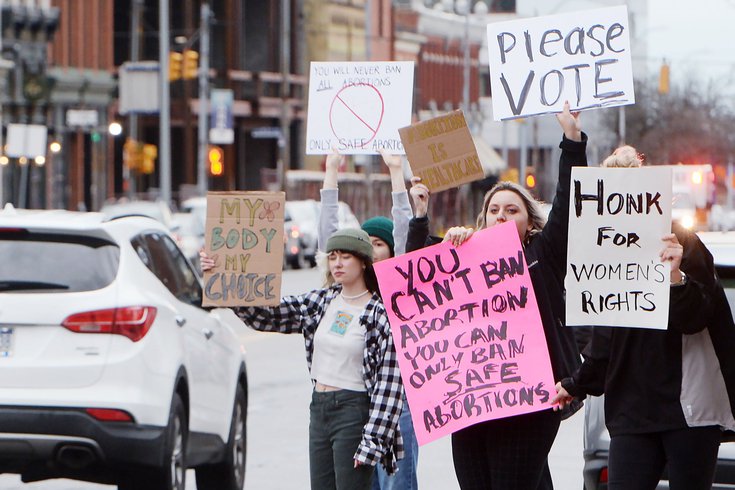 Radnor Township's Board of Commissioners passed a preemptive ordinance on Monday night that would bar police from arresting anyone for getting or providing an abortion in the event that Pennsylvania passes a statewide ban. Pictured is an abortion rights protest in Erie on May 3.

Radnor Township took a stand in support of reproductive rights on Monday, as its Board of Commissioners voted to pass a preemptive ordinance that would bar police from arresting those accused of getting or providing an abortion if it becomes illegal in Pennsylvania.

The ordinance passed in a 4-2 vote with one abstention and would only be implemented if Roe v. Wade is overturned and the state moves to prohibit the procedure. It says that Radnor Township intends to "decline participation in any such (potential abortion) ban, and to codify and restate reproductive rights as they currently exist to the fullest extent of its authority."

The ordinance noted that in the wake of the leaked draft opinion, the Supreme Court appears poised to overturn Roe v. Wade later this year. As it stands currently, abortion is legal in Pennsylvania and throughout the country, though many states have proposed total or near-total bans on abortion if the landmark ruling is overturned.

At least 13 states have trigger laws that would immediately ban abortion if Roe v. Wade is overturned, which could send thousands of abortion seekers into states without heavy restrictions or bans in order to seek care. As long as current laws on abortion are retained, both Pennsylvania and New Jersey can expect an influx of people seeking abortions from neighboring areas.

Gov. Tom Wolf responded to the leaked draft opinion by saying affirmatively that abortion would remain legal in Pennsylvania while he's in office. However, as Wolf finishes out the last several months of his second term as governor, abortion rights have become a key issue in the race for his successor.

Republican gubernatorial candidate Doug Mastriano has said that he supports a total ban on abortion, with no exceptions for rape or incest. The state lawmaker reintroduced his "Heartbeat Bill" earlier this year, which would ban abortion once a fetal heartbeat is detected.

Attorney General Josh Shapiro, the Democratic candidate for governor, told advocates at a rally ahead of the primary election that he would veto any bills banning abortion in Pennsylvania if he's elected in November.

In the 98-page draft opinion, Supreme Court Justice Samuel Alito argues that the 1973 landmark ruling should have never been decided in the first place and that abortion rights are not "deeply rooted in the Nation's history or traditions."

If the draft opinion is finalized and published later this year, legal decisions on abortion rights would return to the states and state legislators would have the ability to pass bans or near-total bans on abortion.

More than a dozen residents of Radnor Township spoke during the Board of Commissioners' meeting on Monday night, both in support and opposition of the ordinance. Some, like attorney Daniel Sherry, spoke out against the ordinance, saying that abortion rights do not need to be addressed at the local township level, but should remain at the state and federal levels.

Others, like Commissioner AnnaMarie Jones, who voted against the ordinance, said that the township should be "cautious" when placing restrictions on police.

"We can't do anything about Roe v. Wade, but what we can do is hold the purse strings and we can say what our police can and can't do financially," Myers said during the meeting.

Commissioner Sean Farhy did not vote, calling the ordinance a political stunt. Several people echoed that sentiment in public comment during the meeting, saying that the Board of Commissioners should not be able to determine what laws police can and cannot enforce.

The ordinance will be back on the Board of Commissioners' agenda this July for a vote to officially adopt, township officials told Radnor Patch.