With Supreme Court poised to overrule Roe v. Wade, what would happen to abortion laws in Pa., N.J., Del.

Governors Tom Wolf and Phil Murphy have reacted by saying abortion-rights would remain in tact in their states, no matter the court's decision 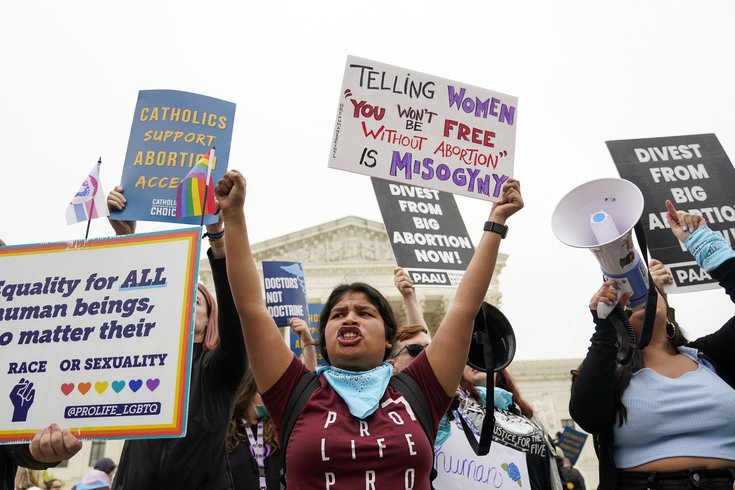 Anti-abortion activists and abortion rights supporters gathered outside Supreme Court in Washington, D.C. on Tuesday, May 3, 2022, after a draft Supreme Court opinion published by Politico indicated the court is considering a decision that would overturn the 1973 Roe v. Wade decision that established a constitutional right to abortion.

The U.S. Supreme Court appears prepared to strike down Roe v. Wade, the 1973 landmark ruling that protects the right to an abortion. Though a final, published ruling is not expected from the court until June or July, a draft of the majority opinion, written by Justice Samuel Alito, outlines the court's preliminary decision.

In the draft, obtained by Politico and published on Monday night – which Chief Justice John Roberts has since confirmed is authentic – Alito writes that Roe v. Wade "must be overruled" and that the decision to determine legality of abortions should return to the states. The justice says the same about the precedent setting Planned Parenthood v. Casey, which establishes the "viability" metric for determining when abortions could be performed.

Alito writes the review of history in the 1973 ruling was weak, and that abortion rights are not "deeply rooted in the Nation's history or traditions."

The leaked draft preliminarily indicates where the Supreme Court justices lineup in the case of Dobbs v. Jackson Women’s Health Organization, a challenge of a 2018 Mississippi law that banned abortion after 15 weeks gestation. The law makes exceptions for medical emergencies and "severe fetal abnormality," it does not make any exceptions for rape or incest.

Jackson Women’s Health Organization is the only licensed abortion provider in Mississippi. Its leaders are challenging the law's constitutionality under the precedent set by Roe v Wade.

Mississippi lawmakers who support the law and anti-abortion advocates hope the Supreme Court's ruling in the case strikes down Roe v. Wade. Attorneys for the state argue that the two precedents – Roe and Planned Parenthood v. Casey – should be overruled, describing them as "unprincipled decisions that have damaged the democratic process."

Alito, the author of the majority opinion draft, and justices Amy Coney Barrett, Brett Kavanaugh, Clarence Thomas, and Neil Gorsuch reportedly sided with Mississippi during a preliminary poll in February following hearing oral arguments, Politico wrote. That would constitute a majority of the court's justices.

If the votes of the justices stay aligned like that when the majority opinion is published later this year, states would be free write abortion laws without considering how those laws conform to the precedent established by Roe v. Wade.

Already, 13 states have trigger laws in place that would immediately ban abortion in the first and second trimesters upon a Supreme Court ruling overturning the landmark case.

On Tuesday morning, President Biden urged Americans to remember that the initial draft opinion is not the final ruling by the Supreme Court, and to vote for candidates in the upcoming elections who support abortion rights.

"We (the administration) said that Roe is based on 'a long line of precedent recognizing the Fourteenth Amendment's concept of personal liberty ... against government interference with intensely personal decisions,'" Biden wrote. "I believe that a woman's right to choose is fundamental, Roe has been the law of the land for almost fifty years, and basic fairness and the stability of our law demand that it not be overturned."

Leaders in Pennsylvania and New Jersey responded to the news by reminding residents that abortion remains legal in all 50 states and those seeking abortions are still legally able to do so.

If Roe v. Wade is overruled, Pennsylvania and New Jersey should anticipate an "influx of abortion seekers as other states around them ban abortion," said Adrienne Ghorashi, program manager at the Center for Public Health Law Research at Temple University's law school.

Here is where Pennsylvania, New Jersey, and Delaware currently stand on the abortion rights and access.

'Abortion is and will remain legal in Pennsylvania,' Wolf says

In Pennsylvania abortions are legal until the 24th week of pregnancy. Gov. Tom Wolf said on Monday night that will not change if the Supreme Court overrules Roe v. Wade. Also, so long as he is governor, Wolf said he would veto any anti-abortion legislation that lands on his desk; his term ends in 2023.

Republicans have the majority in the Pennsylvania legislature, and there have been hints they could propose legislation banning abortion in the state. And in January, a group of Republicans in the House and Senate introduced a constitutional amendment that potentially would circumvent a governor's veto power by putting a referendum on the ballot for voters to decide.

An amendment to the state constitution is a more complicated route, but it's not impossible. In 2021, amid the politicization of COVID-19 pandemic restrictions, Republicans successfully used a referendum on the November ballot to limit the governor's power to declare states of emergency.

The anti-abortion amendment passed in a Senate committee in February. Next it would need to pass in the State Assembly in two consecutive sessions before making it to the ballot.

In the event that Roe is overturned, Pennsylvania would be in a particularly interesting place as both a "receiver of abortion seekers and in the position of an anti-abortion legislature" which, because of Wolf's stance on abortion, have not been able to pass an abortion ban in the state, Temple's Ghorashi said.

Abortion is and will remain legal in Pennsylvania.

3 things to keep in mind:

1️⃣ An official ruling has not yet been made

2️⃣ Once #SCOTUS does rule, it’s up to states to pass legislation to change abortion laws

3️⃣ I’ll veto any anti-choice legislation that lands on my desk https://t.co/kbBGadiMMS

In the draft opinion, Alito lists prior state laws about abortion during the 150 years from the signing of the Constitution until the 1973 landmark ruling. A 1860 law criminalizing abortion in Pennsylvania is included in the chronological index, stating that providing a woman with "poison" in order to induce a miscarriage was a felony in the state.

On Jan. 13, New Jersey Gov. Phil Murphy signed the Freedom of Reproductive Choice Act, which enshrines abortion rights in state law, in an effort to get ahead of the Supreme Court's decision on Dobbs v. Jackson Women’s Health Organization and its possible effects on Roe v Wade. Regardless of the ruling made by the high court this summer, the state will retain abortion rights with Murphy in Trenton.

"I will sign into state law the assurance that every generation of New Jerseyans will have the right to decide whether and when to become a parent no matter in which direction the political winds may blow," Murphy said. "Our state's recognition of reproductive rights stood for four decades on a foundation based solely on prior court rulings. But the United States Supreme Court is preparing to take a wrecking ball to its own precedent — Roe v. Wade — and that would all but demolish our case law-based foundation here in New Jersey."

A truly dark day in America with the news reports that the Supreme Court has voted to overturn Roe v. Wade.

This year, I signed the Freedom of Reproductive Choice Act – codifying a woman's right to choose into state law. New Jersey will not go backwards on reproductive rights.

Turning abortion rights over to the states, though, could make laws on the issue dependent on the political ideologies of each state legislature, since there is no federal legislative protection for abortion in the United States, Ghorashi said.

Just 16 states in the United States have passed laws expanding access to abortion or codifying Roe v. Wade in order to keep in order to protect abortion rights.

In 2017, Delaware updated its legal code to permit "the termination of abortion prior to viability, to protect the life or health of the mother, or in the event of a serious fetal abnormality." The state will retain its abortion-rights laws regardless of a whether the Supreme Court overrules Roe v. Wade.

In April 2021, the FDA issued a statement allowing abortion pills to be delivered by mail for the duration of the pandemic. In December, the agency made the change permanent and allowed for expanded access to the abortion pill in pharmacies.

In December, Seaford, a small town in southern Delaware, passed an ordinance requiring the remains of aborted fetuses be cremated or buried. Attorney General Kathy Jennings responded to the legislation with legal action, suing the Seaford for what she said was a "flagrant violation of state law, constitutional precedent, and established fundamental rights."

It is legal to travel across state lines to access abortion care. In fact, in so-called "abortion deserts," where people have to travel 100 miles or more to access an abortion clinic, traveling out of state is not uncommon, Bloomberg reported.

In 2017, a study found that about 12% of pregnant people in states with restrictive abortion laws sought abortion care out of their home state. Primarily in places like Mississippi (which is at the center of the current Supreme Court battle), Wyoming, Missouri, and South Carolina, traveling that far for abortion care can be costly and difficult to plan.

Lawmakers in Missouri attempted to pass legislation that would have allowed individuals to sue anyone helping a patient cross state lines for an abortion. While the bill failed in the state legislature, experts warn that similar legislation could follow a potential Supreme Court ruling on Roe v. Wade.

"I think states are not going to rest with just saying, 'there won't be abortions in our state,'" David Cohen, professor at Drexel University's Kline School of Law told The Guardian. "I think they're going to want to ban abortion for their citizens as much as they can, which would mean stopping them from traveling."

Ghorashi added that states that continue to provide abortions in the wake of a Supreme Court ruling could see a strain on the availability of time-restricted abortion care, given that nearly half of the country could move to ban the procedure.

The Supreme Court heard its final arguments of the session on Wednesday. Over the next two months, the high court will issue rulings on unresolved cases, including the Mississippi abortion case.