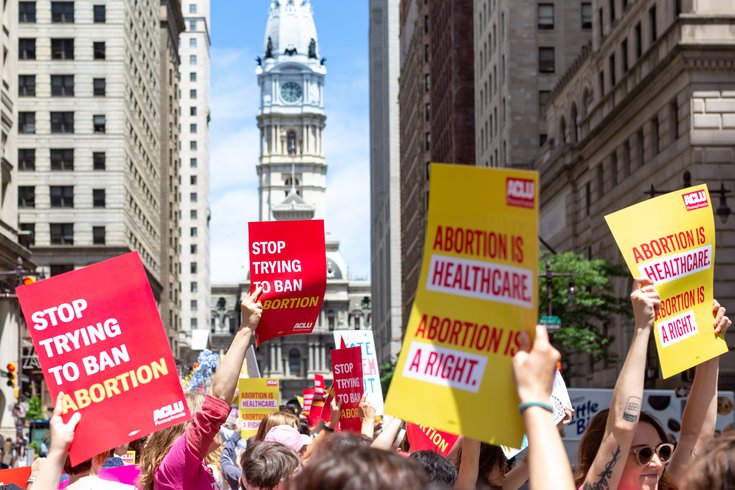 A proposed constitutional amendment that would enshrine abortion restrictions in Pennsylvania law passed out of a Senate Health and Human Services Committee on Tuesday.

A proposed amendment to Pennsylvania's constitution that would prevent the courts from making any unilateral decisions on abortion rights and limit access to the procedure, passed in the Senate's Health and Human Services Committee on Tuesday.

Gov. Tom Wolf has made clear he would veto any legislation impacting abortion rights passed by the Pennsylvania General Assembly, in this instance he would have no say due to to the legislators pursuing this change via a change to the state constitution. The bill still has to pass two separate votes in the House and Senate and then would be added as a ballot question and ultimately decided by voters.

The proposal comes abortion rights advocates are concerned the U.S. Supreme Court could undo Roe v. Wade. The landmark case provides much of the precedent behind the legalization of medical abortion in the country. If it is overruled, more than 20 states would be able to immediately ban abortion.

In Pennsylvania, Sen. Judy Ward and Rep. Donna Oberlander brought the joint resolution for the amendment to state constitution to the legislature. They cited the legal battle over abortion funding for those on a Medicaid insurance plans as the reasoning.

In the 2020 case Allegheny Reproductive Health Center v. Pa. Department of Human Services, abortion rights advocates and providers sued DHS over its ban on Medicaid funding for abortion. Commonwealth Court ultimately ruled against the petitioners, but the ruling has been appealed to the state Supreme Court, where there has been no official ruling.

The proposed constitutional amendment seeks to prevent state courts from being able to unilaterally make decisions about abortion rights. In particular, it aims to prevent the Pennsylvania Supreme Court from declaring abortion a right under the state's constitution.

The Republican-led legislature also is seeking to impose a constitutional amendment that would declare there is no right to abortion or taxpayer funding for abortion in Pennsylvania.

"The abortion industry is asking the court to declare a right to abortion and a right to taxpayer funding of abortion in Pennsylvania's constitution," Sen. Judy Ward wrote in a memo released ahead of the introduction of SB956. "If the court declares such rights, all of Pennsylvania's laws that protect the life and health of mother and pre-born children by regulating abortion are in danger of being subsequently struck down."

Rep. Donna Oberlander's memo released with the House version of the amendment bill is similar. There is one notable difference in the two memos though, specifically regarding the design of the proposed amendment.

While both memos assure legislators that the amendment is designed to "maintain our laws regulating abortion and prevent the taxpayer funding of elective abortion," Oberlander's memo explains that HB2882 would also "allow Pennsylvania to continue to enact pro-life laws" that she believes are "vital to protecting the life and health of women and their pre-born children."

"We're at a really tenuous time for reproductive rights, justice, and health all over the country," said Patty Skuster, a visiting professor at Temple University's Law School, who specializes in global abortion law and policy. "It's part of an overall really troubling trend in the United States."

Currently, the U.S. Supreme Court is deciding on the fate of two statewide bans on abortion, both in Mississippi and Texas. The court's ruling could determine the extent to which abortion access is guaranteed by law in the United States.

The proposed amendment has left some advocates concerned about the potential for a future abortion ban in Pennsylvania.

"The language of the amendment is overly broad and really does leave open opportunities to restrict not only abortion but other types of reproductive health services," Skuster said. "We know that many legislators in Pennsylvania want to ban abortion altogether, and this is an attempt to do so. It certainly could result in a complete ban."

The anti-abortion amendment is among 70 proposed constitutional amendments introduced by the state's legislature. Many of them focus on hot-button issues like gun rights and voting access, and they all circumnavigate potential vetos by the governor.

Women's Law Project, a Philadelphia-based, public-interest, legal organization, has been working to secure reproductive rights protections for decades, including in the Medicaid abortion ban lawsuit. Organizers penned a letter to the Pennsylvania General Assembly on Jan. 24, opposing the amendment.

In the letter, WLP describes SB956 as a "blatant attempt to deny Pennsylvanians the right to access vital reproductive health care," and includes a concern members of the legal group have that the language of the proposed amendment could have the potential to limit access to other forms of health care, including contraception, common forms of miscarriage management, and in-vitro fertilization.

"This proposed constitutional amendment seeks to anchor a permanent, broad restriction on an undefined range of reproductive healthcare in our state constitution, a document that seeks to protect our rights — not restrict them," WLP wrote. "SB956 is political interference in personal medical decisions that is designed to limit reproductive freedom and equality. The fundamental right to abortion should not be up for a vote."

"The bill is in response to a lawsuit that looks to the court to recognize the protection for abortion in the Pennsylvania state constitution," Skuster said, referencing the Medicaid lawsuit. "We see Republicans in the legislature wanting to curtail abortion rights in Pennsylvania and looking ahead to really curtail reproductive health across the state."

Currently, Pennsylvania's abortion laws are governed by the Abortion Control Act, composed of several rules dictating what those seeking abortion care must abide by before receiving the procedure. These include the mandated 24-hour waiting period, parental consent for minors receiving the procedure, and legality of abortion at or before 24 weeks, except in cases where the woman's life is in danger. It also requires those seeking abortion care to receive a consultation informing them of alternatives to termination.

The Abortion Control Act also prohibits government funding or state insurance funding for abortions only in cases of rape or incest.

If passed, the proposed amendment would not appear on Pennsylvania ballots until at least 2023. Currently, there is relatively broad support for abortion rights in the state.