Gov. Wolf signed a bipartisan bill into law on Wednesday, citing the importance of supplying relief during the ongoing COVID-19 pandemic 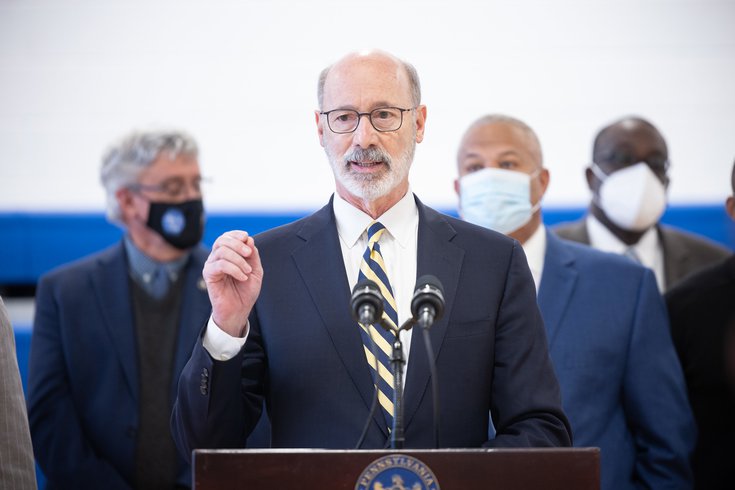 Gov. Wolf signed bipartisan legislation into law on Wednesday, providing $225 million in American Rescue Plan Act funds to Pennsylvania hospitals and behavioral health centers to assist in recruitment and retention of health care workers. The bill also creates a Task Force focused on addressing the impacts of the opioid crisis on infants and other young children.

Gov. Tom Wolf signed a bill into law on Wednesday that will provide $225 million in American Rescue Plan funds to support health care workers and create the Opioid Abuse Child Impact Task Force – a group focusing on the safety and well-being of infants and young children affected by parental substance use issues.

The legislation arrives nearly two years into the COVID-19 pandemic, which Wolf said made the bipartisan bill all the more important, as it will provide some much needed relief to a severely strained workforce.

"We have been fighting the pandemic for nearly two full years now, and our health care workers who are working on the front lines have bore the brunt of this fight," Wolf said. "They are the ones working day in, and day out to treat the sick. They are the ones who are comforting the bereaved."

Of the funding provided through the bill, $210 million will be allocated directly to hospitals, critical care centers, and behavioral health facilities to support recruitment and retention of health care workers amid large-scale workforce shortages.

"At the end of the day, this is about our acute care workers," said Sen. Kim Ward. "They have lived through so much these past two years. As we saw 40,000 Pennsylvanians die, they were holding their hands, because their families weren't able to."

My administration launched a workgroup to bring Democrats and Republicans together to make this legislation a reality.

An additional $15 million will go to support the state's Student Loan Relief for Nurses program, which forgives some student debt for nurses who are working on the frontlines. Wolf noted that the program, which officially opened on Jan. 1, already has more than 8,000 applicants.

"We recognize the overwhelming burden that has been placed on your shoulders, and while we're deeply grateful, we know that what you need is not our thanks," Wolf said. "What you need is our help, and after today, help is on the way."

The section of the bill that establishes the Task Force does so by explaining that residents of Pennsylvania have been devastated by the opioid epidemic over the last two decades, particularly infants and children whose parents are living with opioid-related addiction.

Yesterday, I was proud to vote in favor of HB253, which sends $225 million of ARPA funds to help retain and recruit frontline heroes who have been there when we have needed it most throughout the pandemic. pic.twitter.com/nNUrvbi04O

In particular, the bill notes the recurrence of newborns addicted to opioids, and the increased rate of children being placed in protective custody because of their parents' drug addiction.

The Task Force is directly responsible for introducing strategies to reduce the number of substance-exposed infants and improving health care outcomes for pregnant women who are working to recover from substance use. The group will include several elected and appointed officials – many of whom must have a direct link to the issue of children affected by substance abuse.

The Task Force portion of the legislation, which was originally introduced in December 2020, seeks to focus on the impact that the opioid crisis has had on children across the state.

In a memo sent to members of the state's House of Representatives in 2020, Rep. Clint Owlett wrote about the importance of providing a targeted effort to curb negative health outcomes for infants and young children.

Owlett wrote that between 2010 and 2014, "more than 7,500 infants who were born onto Medicaid were diagnosed with Neonatal Abstinence Syndrome (NAS) after their mothers had used heroin or prescribed opioids during pregnancy. Sixty-one of those infants died before their first birthday."

NAS is a withdrawal symptom that occurs in newborns that have been exposed to certain substances, according to the U.S. Centers for Disease Control and Prevention. In 2019, 1,608 incidents of NAS were reported to the Pennsylvania Department of Health from 94 of the state's birthing facilities.