A matter of priorities

For a 10-6 team, the Eagles have no shortage of positions on their roster that could use either upgrades or infusions of youth and/or depth. Here we'll take a look at their team needs, from most glaring to most stable:

What a mess. Cary Williams and Bradley "Under the Rainbow" Fletcher formed one of the worst starting CB tandems in the NFL, and both could be gone this offseason. Fletcher is a free agent, and is unlikely to be re-signed after the defensive staff gave him every opportunity to break out of what defensive coordinator Billy Davis classified as a "slump."

Williams is among the highest paid players on the team, and is scheduled to count for $8,166,668 against the cap next season. If the Eagles cut him, they'll save $6,500,000 of that. (Graphic via overthecap.com)

In the slot, Brandon Boykin didn't play up to the level he played at in 2013, but is still a good player who has to be frustrated with his low number of snaps playing behind two less talented corners. The Eagles will struggle to retain him when his contract expires after 2015, as there may be other teams around the league that are less concerned with Boykin's height and may view him as a starter. Meanwhile, Nolan Carroll was OK in a sub-package role, but the defensive staff didn't think he was better than Fletcher, which is concerning.

And then there's Jaylen Watkins, who we didn't get to see much of in meaningful games in 2014. To be determined if he'll settle in as a corner on the outside, in the slot, or at safety.

The Eagles are still searching for #NextDawkins. Malcolm Jenkins was a quality addition last offseason, bringing stability to one of the safety spots, but the Eagles have to find someone better than Nate Allen, who simply doesn't seem to have good football instincts. Earl Wolff showed some promise as a rookie, but he can't stay healthy. Chris Maragos is a stellar special teams contributor, but nothing more than a backup in the regular defense. Y you not draft Earl Thomas, Eagles?

In May last year, I calculated the average age of every projected starting offensive line in the NFL, and the Eagles were the second oldest. They are particularly old at offensive guard. At the time, Evan Mathis was the oldest projected starting OG in the NFL, and Todd Herremans was the fifth oldest. Mathis will turn 34 during the 2015 season, and Herremans will turn 33. The Eagles liked Matt Tobin quite a bit, although I'm not sure if their opinion of him has changed after he struggled in game action this season. But clearly, it is imperative that the Eagles begin stacking the cupboard behind their aging line with more youth and depth.

Is Nick Foles a franchise QB? After cautious optimism following Foles' stellar 2013 season, he did not play well in 2014. As long as you don't think you have a top 10-12 type of QB in the NFL, you should always be searching for someone who can be. Foles will be on the roster in 2015, as he's in the final year of his rookie deal. He'll likely be given the opportunity to compete for a starting job in training camp, but the Eagles need to find a way to give him legitimate competition.

As for the others, Mark Sanchez proved he's not a long term answer, and is a free agent, while Matt Barkley has become something of an afterthought.

Mychal Kendricks continues to improve and is becoming one of the better starting linebackers in the NFL. And then it gets dicey. DeMeco Ryans, who turns 31 in July, tore his right Achilles tendon against the Texans, four years after he tore his left Achilles tendon. Ryans is as respected as anyone in the Eagles' locker room, but does not have good speed and could be further slowed by this latest serious injury. Beyond that, the Eagles lack quality proven depth.

Cole has just 17.5 sacks the last three seasons and is an imperfect fit in the Eagles' 3-4 defense. He is never going to see that money. The Eagles could ask Cole to take a pay cut, and if Cole refuses, you may see him with another team back in his old 4-3 DE role.

Beyond Barwin and Cole, Brandon Graham is an interesting case. He is a legitimately good pass rusher, which is a valuable commodity in the NFL, but he has never played more than 524 snaps in one season. What kind of production could he put up as a full-time player? I'll bet some 4-3 teams would love to know. A good case study is Everson Griffen of the Vikings. Here's a comparison of what Griffen did in his three seasons leading up to free agency a year ago, and what Graham has done his last three seasons:

The Vikings re-signed Griffen last offseason to a 5 year, $42.5 million contract, with $19.8 million guaranteed. You can bet that Graham's agent is pointing that out to the Eagles and whoever else will listen. The Eagles want to re-sign Graham, but Graham would be crazy not to test the free agent waters to see what 4-3 teams might offer.

And then there's Marcus Smith. Is he an OLB? An ILB? Is he good? Are there any horse socks? Is anybody listening to me?

While the Eagles' personnel isn't exactly as bad off at OLB as some other spots below it on this list, it's more about the importance of the position. Successful defenses have good edge rushers. The Eagles got good play from their OLBs in 2014, but they have to continue to load up.

The good news is that Jeremy Maclin had a breakout season, catching 85 passes for 1318 yards and 10 TDs. The bad news is that he did it in a contract year and is going to get paid. The Eagles don't have much of a choice here. They're going to have to pay Maclin bigtime dollars and keep him on this roster, because they are otherwise thin on the outside.

Opposite Maclin, Riley Cooper had a dreadful season. Cooper made a number of big plays in 2013, but was a big play no-show in 2014. In 10 of 16 games last season, Cooper averaged less than 10 yards per catch: 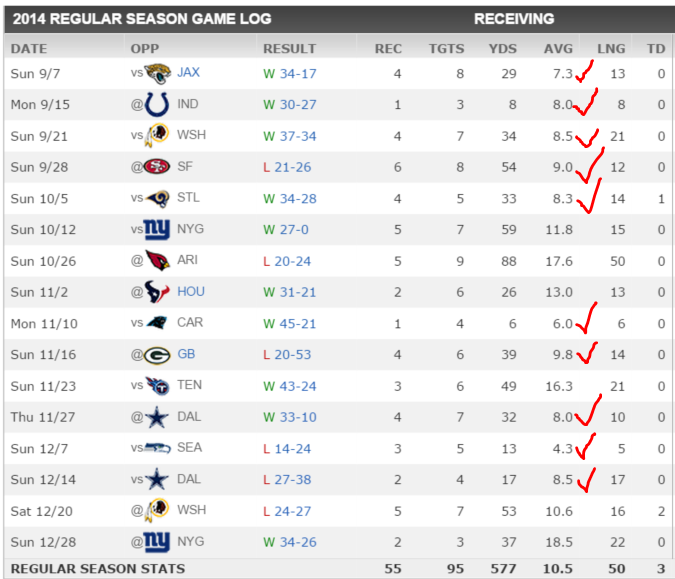 He also averaged a paltry 3.0 yards after the catch, which is brutally bad in a spread offense. But he sure can block!

As for the rookies, Jordan Matthews had a very impressive rookie season, falling just 40 yards short of DeSean Jackson's rookie record of 912 receiving yards in 2008. But on the whole, Matthews' rookie season compares well to Jackson's, although he did it much more quietly:

Matthews spent almost his entire rookie season operating out of the slot. To be determined if the Eagles want to increase his role by moving him outside going forward.

The "other" rookie WR was of course Josh Huff. Rookie mistakes plagued Huff's rookie season, but his talent is fairly obvious. If he can cut out some of the mental lapses and become a more polished receiver, Huff has a high ceiling.

Unfortunately for the Eagles, they're stuck with Cooper through the 2015 season, as it will cost them more to cut him than to keep him. But that doesn't mean they should put off adding receivers in the short term because they're already over-paying one.

The Eagles are set with Lane Johnson at one tackle spot for the foreseeable future, and although Jason Peters is aging (he turns 33 this month), he is an athletic freak of nature who may play into his mid thirties, a rarity for offensive tackles. However, the Eagles could use quality depth/youth in place to take over for Peters when he can no longer play at a high level.

The Eagles' run game struggled in 2014, for a number of reasons. The offensive line suffered an abnormal number of injuries, and the passing game wasn't anywhere near as effective as it was in 2013 when LeSean McCoy was the NFL's leading rusher. But also, McCoy himself often didn't look like the same guy he was in 2013, and he is set to count for almost $12 million against the cap in 2015.

The Eagles might be wise to start considering drafting a running back. That back might not necessarily be a guy to replace McCoy in 2015, but if McCoy were to string together a pair of consecutive down seasons, he may not be worth carrying at his price tag in 2016. As of right now, the Eagles don't really have a guy they can trust to carry the load other than McCoy. Darren Sproles is a weapon, but is not a three-down back that can carry the ball 15+ times per game, and Chris Polk can't be trusted to stay healthy.

If the Eagles were to draft a running back, they could ease him in, and if he proves to be a productive player, he would give the Eagles some insurance if McCoy is indeed no longer the elite talent he once was.

This would be the year to do that, as the draft is going to be loaded with talent at running back.

Cody Parkey had a good season, up until Week 16, and is highly likely to return as the Eagles' kicker next season. In Alex Henery's first season under Chip Kelly, the Eagles did not push Henery with any competition at all in training camp. It will be interesting to see if they push Parkey.

Jason Kelce is among the best centers in the NFL, although he is beginning to compile a history of injuries. If the Eagles found an offensive lineman who can play multiple positions including center, then that would be ideal, but it is unlikely that they will use any kind of valuable resource on a player whose primary position is center.

Nothing is off limits in terms of acquiring talent at any position, but the Eagles are pretty set at tight end.