Should the Eagles prepare for life after Shady?

Continuing on with our offseason team needs series, we turn to running back. Here's what we said about the running back position, which we identified as the ninth-most glaring need on the team when we began this series:

"The Eagles' run game struggled in 2014, for a number of reasons. The offensive line suffered an abnormal number of injuries, and the passing game wasn't anywhere near as effective as it was in 2013 when LeSean McCoy was the NFL's leading rusher. But also, McCoy himself often didn't look like the same guy he was in 2013, and he is set to count for almost $12 million against the cap in 2015.

The Eagles might be wise to start considering drafting a running back. That back might not necessarily be a guy to replace McCoy in 2015, but if McCoy were to string together a pair of consecutive down seasons, he may not be worth carrying at his price tag in 2016. As of right now, the Eagles don't really have a guy they can trust to carry the load other than McCoy. Darren Sproles is a weapon, but is not a three-down back that can carry the ball 15+ times per game, and Chris Polk can't be trusted to stay healthy.

If the Eagles were to draft a running back, they could ease him in, and if he proves to be a productive player, he would give the Eagles some insurance if McCoy is indeed no longer the elite talent he once was.

This would be the year to do that, as the draft is going to be loaded with talent at running back."

There aren't any free agents that feel like great fits for the Eagles, so we'll skip that for now, but let's take an initial look at what the Eagles can potentially do this offseason to improve the RB position in the draft:

Gurley is a man. He is a no-nonsense, downhill runner -- See hole, hit hole, if anyone gets in the way of the hole, run through him. Look:

His career rushing numbers. Note the yards per carry, playing in the SEC: 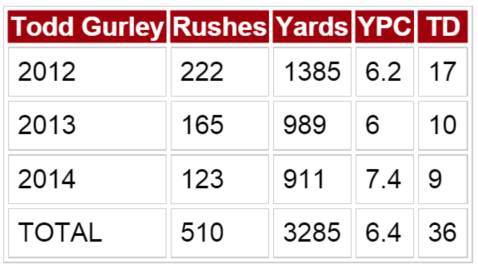 Gurley is also an accomplished receiver out of the backfield (37-441-6 in 2013), kick returner (2 return TDs on 11 career kick returns), and is a good pass protector. Imagine a Shady-Gurley 1-2 punch. Yikes.

But... There is one major drawback to drafting Gurley. He tore his ACL in November of 2014, and will probably miss at least some of training camp, at a minimum. Of course the flip side of that is that he'll be drafted much lower than he originally might have been. Any team who takes a chance on Gurley will have given him a thorough medical check, but if he's OK, holy crap what a talent.

Abdullah is a smaller, speedy back unlike some of the other bigger bruising backs on this list. He will be competing at the Senior Bowl in a couple weeks. While Abdullah's ability to run and catch is obvious, NFL personnel people will want to see how well he can pass protect during the week of practices at the Senior Bowl.

The thing that could interest Chip Kelly about Abdullah is his character, because, you know, #culture. Abdullah was selected as the 2014 Senior "CLASS Award" winner for the NCAA Division I Football Bowl Subdivision. From btn.com:

“I will be hard pressed to find someone that I will coach that will be as well-rounded of an individual as Ameer Abdullah,” said longtime Nebraska assistant coach Ron Brown, who serves as Abdullah’s position coach. “His work ethic on the football field has separated him from the pack, and when you look at it in totality, he has made a great impact as a student-athlete and a citizen. His inspiration to our football program, our community and our entire state is unparalleled. Ameer has always said ‘Why not me’, and he has put his life where his mouth is.”

Melvin Gordon wasn't the only 2000 yard rusher this year in college football. Indiana's Tevin Coleman also had a ridiculous season statistically, rushing for over 100 yards in all but one game: 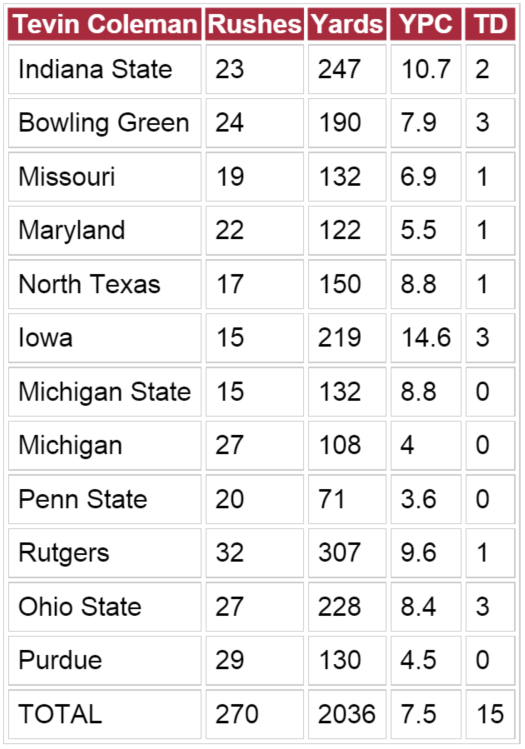 Coleman's situation at Indiana reminds me a little of Jordan Matthews' situation at Vanderbilt a year ago. Opposing defenses knew Vanderbilt was going to Matthews, because they didn't have anything else on their offense, and he still put up very impressive numbers. Similarly, opposing defenses knew that Coleman was Indiana's only real threat offensively, and they still couldn't stop him.

Johnson has drawn comparisons to LeSean McCoy, which I can understand to some degree. You can see in the highlight real below that Johnson is outstanding at "cutting on a dime" and changing directions like McCoy, but with less wiggle. In my opinion, he's more of a one cut north-south runner than McCoy.

Yeldon has a rare size-speed combo. It will be interesting to see what he runs at the combine at 6'2, 221. You can see his breakaway speed here:

The biggest negative for Yeldon is that he's a fumbler. He fumbled three times his freshman season, five times as a sophomore, and twice as a junior. For his career, he has lost seven fumbles, and that's at a level of football where opposing defenses aren't quite as good at ripping the football out as they are in the NFL. That has to be a concern for a team that turned the ball over 36 times in 2014.