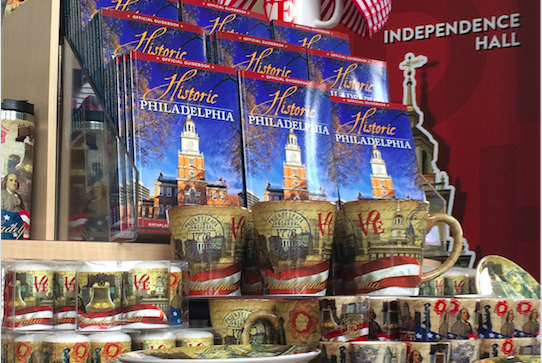 Take a walk along the block of 5th and Market streets on any given day and you'll find droves of students at Independence Mall, tour groups getting their bearings straight, promotional events in full swing — the sort of commotion befitting a city that notched a record 41 million domestic visitors in 2015, according to annual statistics released by Visit Philly.

Among those travelers to the City of Brotherly love, a full 88 percent, or 36.2 million, came here for leisure. As Lonely Planet confirmed with Philly's first place rank as a national destination in 2016, people are increasingly booking stays in Philadelphia because it's seen as a premier city for recreation.

That's the impetus behind a $15 million, two-year renovation at the Independence Visitor Center, a private 501c3 non-profit owned in a unique partnership by the National Park Service.

Without closing its doors to the public at any point, work will include an expanded gift shop, a wrap-around upper-level terrace, revamped information desks, new bathrooms, an improved cafe, and a bay of digital screens for visitors to plan and download their itineraries. All of this will happen at what is arguably Philadelphia's most historically significant site. 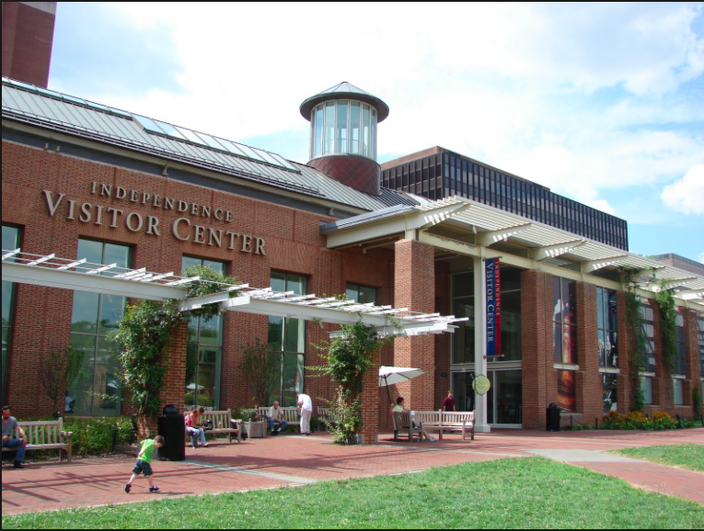 "If somebody asked you to name the best place to a put a visitor center in Philadelphia, the pin would be dropped exactly where we're at," said Jim Cuorato, who has proudly served as CEO of the Independence Visitor Center for the past six years.


He's not kidding. Independence Hall, which sits inside the 55-acre domain of Independence National Historical Park, is the primary reason Philadelphia gained a seat in the Organization of World Heritage Cities (OWHC) last fall. That announcement was greeted with considerable fanfare, although the official meaning of the designation was slightly misleading.

No, Philadelphia as a whole is not a UNESCO World Heritage City. Independence Hall, however, is one of just 23 UNESCO World Heritage sites in the United States. That's what earned Philadelphia a prestigious membership among 250 other cities in the OWHC, a Quebec-based non-profit that promotes economic cooperation and helps grease the wheels for international tourism.

Spotting an opportunity to steward this influx, Cuorato and his partners at the National Park Service evaluated their many accomplishments in the 15 years since the Independence Visitor Center found a home at 1 North Independence Mall West. It's time, they concluded, to create a tourism hub equipped for the 21st century.

As soon as you set foot inside the Independence Visitor Center, two carpets on an inclined plane will greet you in a dozen different languages. On your left, you'll find a gift shop and a pair of restrooms that staff members say are the most popular attractions on site. This time, they are kidding.

Period actors, present throughout the park grounds, spring the history of Philadelphia to life at the visitor center. One revolutionary seated at an ink well teaches kids how to finish their signatures with the stylish Adams flourish. He explains that this was used to keep signers of the Declaration of Independence from treasonously reneging on their commitments.

Another young visitor intently watches as a second actor plucks away on a dulcimer. Courato is overcome with joy.

"These smiling faces are what it's all about," Cuorato says. "Every day, people are excited to be here in Philadelphia and our job is to help them plan their experience from dawn past dusk." 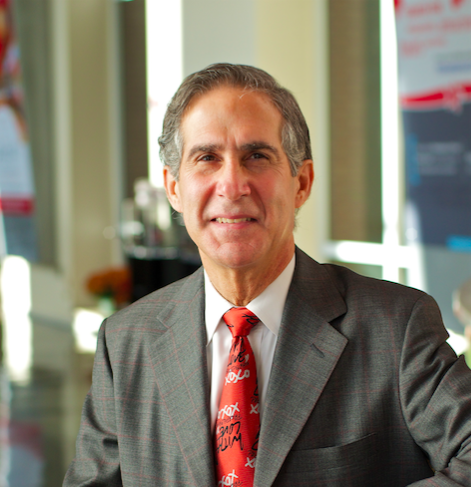 Further along in the visitor center, now 50,000 square feet, staff and members of the Park Service stand at front desks and answer every conceivable question a traveler might have. If they don't speak English, multilingual attendants are ready to be of service.

It wasn't always this way. Prior to 2001, the primary information center for travelers was housed in the Fairmount Park Welcome Center at 16th and JFK Boulevard, the iconic saucer-like structure that will survive a full-scale renovation of LOVE Park with a brand new art installation.

The birth of the Independence Visitor Center came with funding from The Pew Charitable Trusts, the Commonwealth of Pennsylvania, the Delaware River Port Authority, the Annenberg Foundation, the Connelly Foundation and the John S. and James L. Knight Foundation. Fifteen years later, the visitor center draws 2.5 million people annually — factoring in Independence National Historical Park, it's more than 4 million — and generates between $200 and $400 million in annual economic impact.

For the Greater Philadelphia Area, it's anywhere from $12 to $24 million in local and state tax revenues each year, including regional commerce in surrounding Montgomery, Bucks, Chester, and Delaware counties.

At a visitor center? Haven't we all seen the dingy huts and sterile cornershops of other destinations? The places that ultimately drive people to the hotel concierge at noon after squandering half a day wondering what on earth to do? 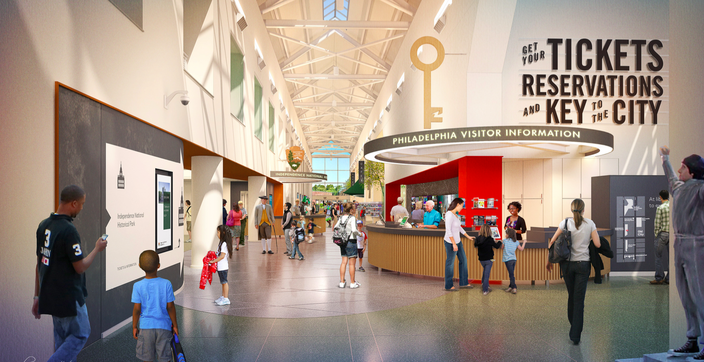 
"What we have in Philadelphia is unlike any other city in the United States. This public-private partnership between the visitor center and the National Park Service is the ideal primer for historical sightseeing and day planning. From Independence Hall to the Liberty Bell and Carpenters' Hall, travelers can absorb the city's history and then get out to the museums, the restaurants, the ball game, everything. It can all be arranged here."

That last part is one of Cuorato's greatest successes. He's worked out ticket vending and sponsorship deals with a growing list of attractions throughout the Philadelphia area, taking a commission that has proven beneficial for everyone.

"We can hand out a brochure and encourage people to go somewhere," Cuorato says, "but will they actually go there? We want people to make the most of their trip. When they buy the tickets here, they're definitely going to that Pixar exhibit at the Franklin Institute. They're going to the Phillies game. The feedback we get is just overwhelmingly positive."

As Philadelphia's star continues to rise, the scene at the visitor center has gotten a bit cramped as of late. Travelers pack hallways, exhibits, the small cafe, floors, stairs, anywhere they can to draw up the day's game plan. Cuorato, who carefully observes his guest experience, wants to create a more accommodating and streamlined flow at the Independence Visitor Center.

He's more than prepared for the challenge of raising the full $15 million needed to complete the renovation.

Cuorato's executive bio includes stints as the city's Commerce Director under former Philadelphia mayors Ed Rendell and John Street. He's served as director of the Philadelphia Industrial Development Corporation. Before leading the Independence Visitor Center, he was Vice President of Urban Development at Brandywine Realty Trust. He's been a pro at navigating the financial complexity of dozens of major projects Philadelphia. 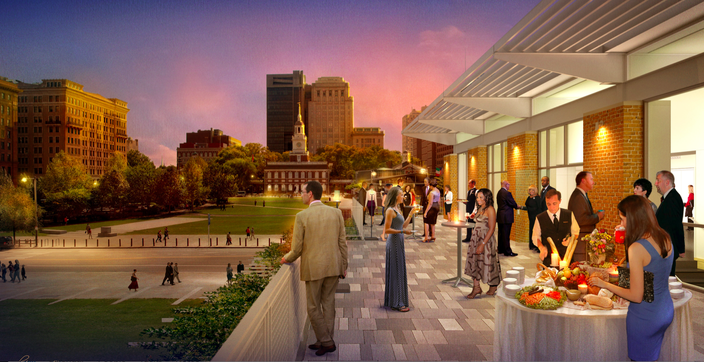 This one is special to him.


"Out of all the places I've worked before, I've never seen such a genuine representation of Philadelphia as I do here at Independence Visitor Center," Cuorato says. "We have the mechanisms in place to reach our goals by working with foundations and some private sponsors."

"The replica Liberty Bells are our top-selling product," Cuorato says, "although the political stuff has been flying off the shelves."

He means bobbleheads of Hillary Clinton and Donald Trump, or a moose-printed "Moving to Canada" T-shirt for those who feel the nation is heading astray. If they need a reminder of our heritage, just behind the gift shop's front wall is the "Indelible" glass sculpture featuring text from the Declaration of Independence, a public art installation from the center's earliest days. It has already endured a spider-webbed crack not unlike the fissure on the real Liberty Bell. 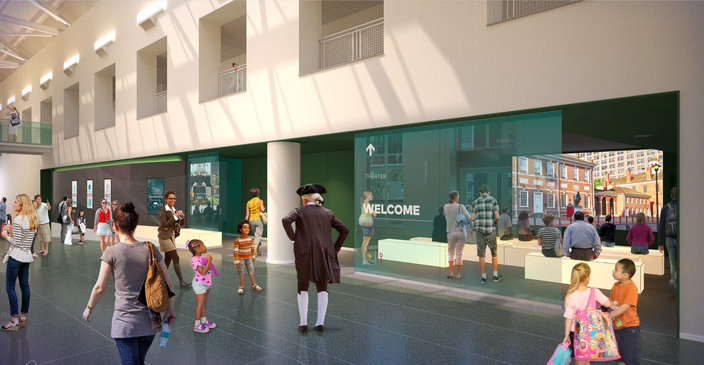 Rendering or renovation outside theatres at Independence Visitor Center.

Moving the restrooms and expanding the gift shop is only the first step in the process, which will progress from front to back. Two new information desks will be dedicated, respectively, to event planning with visitor center staff and to tour groups organized by the National Park Service. The existing mezzanine terrace — one of the best views in Philadelphia — will wrap around the building opposite the gift shop and open up additional space for events, banquets and weddings.


The two theaters and exhibit spaces at the visitor center, meanwhile, will both remain in place with upgrades and a brand new 7-10 minute video that acts as an introduction and invitation to Philadelphia.

To date, the Independence Visitor Center has raised $2 million and has a pending $3.2 million grant application from the state's Redevelopment Assistance Capital Program. The project, designed by local architects SaylorGregg, will be completed without federal funding. 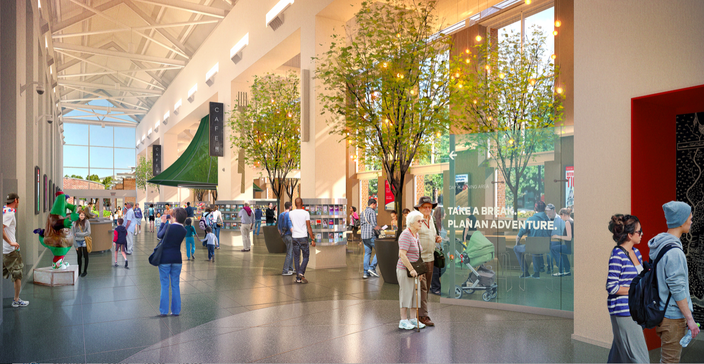 In Dunn's estimation, the renovation could not be timed to better perfection.


"I've never seen so many pieces come into place all at once for a city as we're seeing in Philadelphia. Between the rising number of visitors, the Pope's recent visit, the upcoming Democratic National Convention, and the growing hospitality sector, Philadelphia is rapidly evolving as a preferred destination, for its history and for its future."

For Jim Cuorato, that promising trajectory is going to mean smiles for miles.