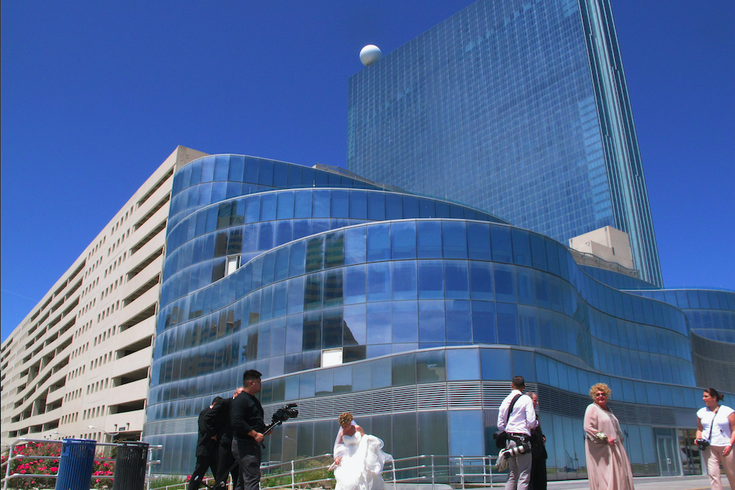 A wedding party searches for spots for a photo near the former Revel casino in Atlantic City, N.J., Friday, June 10, 2016. Revel and its next-door neighbor the Showboat both closed in 2014, and are re-opening soon, but are taking very different paths. Revel will reopen as a casino, while Showboat will be a non-gambling hotel.

As struggling Atlantic City's main casino workers' union continues negotiations ahead of a threatened strike, Tower Investments CEO Bart Blatstein says the revamped Showboat is on track to reopen as a hotel in the coming weeks.

Blatstein purchased Showboat from Stockton University for $23 million in January after Caesar's Entertainment shut down the once vaunted Boardwalk presence in August 2014.

Among the four Atlantic City casinos that shuttered that year, Showboat had actually reported an operating profit in its final months. Caesars' debt obligations ultimately led to its closure and the company placed a deed restriction potentially preventing its use as a casino.

According to The Press of Atlantic City, Blatstein anticipates opening the hotel's 852 rooms on July 8 after Showboat hired 250 employees and completed training sessions this week.

Atlantic City Mayor Don Guardian and city's Department of Licensing and Inspections have both praised Blatstein for his work renovating the property in time for the peak season in 2016.

Showboat originally opened in 1987 with 60,000 square feet of gaming space and 60 bowling lanes. The latter were shut down in 2001 to make way for new casual dining options. Two years later, the 544-room Orleans Tower was completed, followed by remodeling of the original Bourbon Tower in 2007.

This is Blatstein's second major Atlantic City project in the last two years. Last summer, he opened up The Playground entertainment complex at the former Pier Shops at Caesars. A full rebrand of Showboat will take place in the next year and Blatstein is reportedly interested in acquiring other Boardwalk properties.

An official announcement of Showboat's reopening is expected to be released next week.