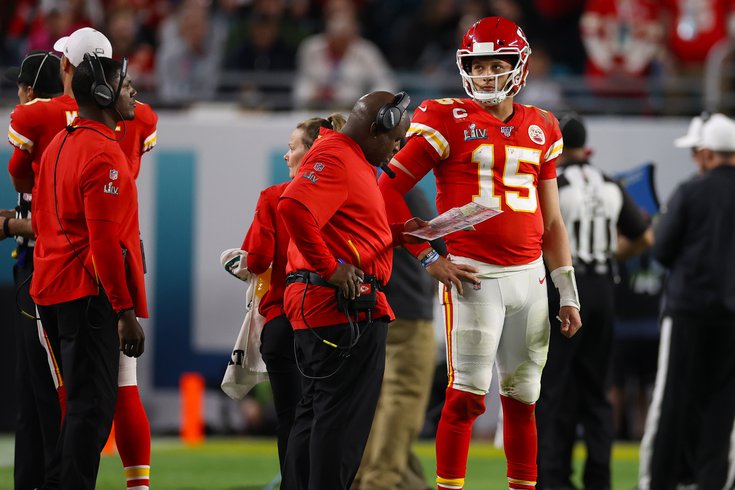 The Philadelphia Eagles have requested to interview Kansas City Chiefs offensive coordinator Eric Bieniemy, according to a report from Mike Garafolo of NFL Network.

Just mentioned on @nflnetwork the #Eagles have requested permission to interview Chiefs OC Eric Bieniemy for their vacant head-coaching job, sources say. TBD when the interview will occur because KC is alive.

The Eagles will have to wait, however, until the Chiefs' season concludes before they conduct that interview. That could be a while.

Bieniemy was a running back in the NFL for nine years, including one year in Philly, in 1999. He has mostly either been a running backs coach or an offensive coordinator over his 20 years as a coach, with one season mixed in as an assistant head coach. His coaching history, via Wikipedia:

The Chiefs have had one of the most explosive offenses in the NFL in the three years that Bieniemy has been the offensive coordinator. Of course, Andy Reid and Patrick Mahomes have a lot to do with that. The Chiefs' offensive numbers since 2018:

Why hasn't Bieniemy gotten a head coaching job yet? It's perhaps because he reportedly hasn't interviewed well in previous opportunities, and he has a concerning history (h/t to Brandon Gowton of BGN for finding those reports).

Of course, just because a candidate doesn't interview well doesn't mean he can't be a good head coach. After watching Doug Pederson in press conferences the last five years, it's hard to imagine that he interviewed well, and he was able to win the first Super Bowl in franchise history.

Jeremy Fowler of ESPN noted that it will be a bad look for the NFL if no Black candidates are hired for the second consecutive hiring cycle, with Bieniemy probably serving as the most noticeable snub.

To the point about Bieniemy, there's growing frustration in coaching circles that Black coaches will be shut out of the head-coaching cycle altogether for the second straight year. Bucs defensive coordinator Todd Bowles has an outside chance in Philly and former Lions coach Jim Caldwell and Bills defensive coordinator Leslie Frazier will be given a legitimate chance in Houston (Frazier's interview is Sunday). But doors are shutting. And Daboll will most likely occupy one of those final three spots. Bieniemy is not getting any leads that he's a finalist anywhere. The whole thing could prove messy.

This would be a bad look for the league after Troy Vincent, the NFL's executive vice president of football operations, spent basically the entire offseason promising improvement in this area. The general manager hires have reflected increased diversity, but so far Saleh, who is of Lebanese descent, is the only minority candidate who has scored a head-coaching job in this cycle.

The Eagles have also interviewed Duce Staley and Patriots LBs coach Jerod Mayo. Should the Eagles end up hiring Bieniemy, it would be the second straight Chiefs OC under Reid that they will have tabbed as their guy.