Report: Eagles WR Mike Wallace expected to be out for 'a while' 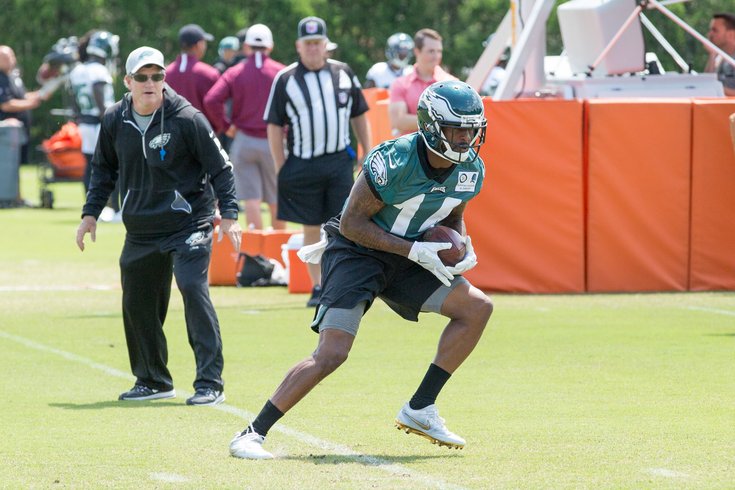 Mike Wallace during OTAs at the NovaCare Complex.

Wide receiver Mike Wallace has zero catches in his short career with the Philadelphia Eagles, and yet, his absence after leaving with an ankle injury in Sunday's loss against the Tampa Bay Buccaneers was a big blow. According to Mike Garafolo of NFL Network, the Eagles will be without Wallace for "a while."

The #Eagles are preparing to be without WR Mike Wallace (ankle) for “a while,” sources tell me and @TomPelissero. Evaluations ongoing but it’s clearly going to be an extended absence for Wallace. Another tough blow at for Philly.

Wallace was in a walking boot after the game, and he tweeted the following hint that his injury is serious.

According to ESPN's Adam Schefter, Wallace's injury is potentially season-ending.

Eagles' WR Mike Wallace, spotted in a walking boot after Sunday's loss to Tampa Bay, suffered a potentially season-ending ankle injury, per sources. He is undergoing further testing today to determine specific ankle injury, but he is out indefinitely.

The Eagles were already without No. 1 receiver Alshon Jeffery, who continues to rehab from a torn rotator cuff surgery, as well as No. 4 receiver Mack Hollins, who the team placed on IR with a groin injury. With the No. 1 (Jeffery), No. 2 (Wallace), and No. 4 (Hollins) receivers down, the Eagles' passing offense predictably sputtered in Tampa on Sunday, as the Birds were forced to give significant snaps to guys like DeAndre Carter, Kamar Aiken, Shelton Gibson, and Josh Perkins.