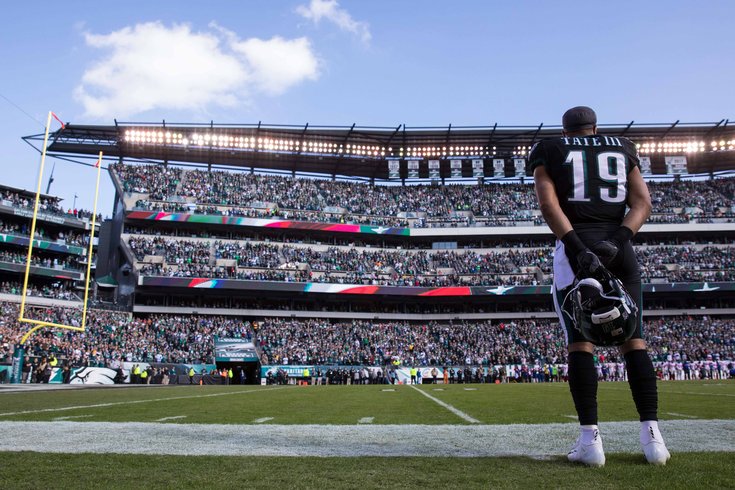 After just half a season with the Philadelphia Eagles, wide receiver Golden Tate has signed with the New York Giants on a four-deal worth $37.5 million, or $9,375,000 per year.

And here are the contract terms: Golden Tate to the Giants on a four-year, $37.5 million deal that includes $23 million fully guaranteed, per source. https://t.co/TN6fNHOfHv

After the Eagles traded for DeSean Jackson and opted to keep Nelson Agholor on his fifth year option in 2019, there was a near zero percent chance that Tate would be coming back to Philly.

The Eagles traded a third-round pick for Tate at the 2018 trade deadline, a move that remains a bad use of resources. Tate was an eight-game rental (it ended up being a 10-game rental with some luck), and his production (37-342-2 in 10 games) fell short of expectations even after it was a questionable deal in the first place. That wasn't all Tate's fault, of course, as the Eagles' staff even admitted that they failed to find an optimal way to utilize Tate's talents.

On the bright side, the cost of a third-round pick will be offset to some degree, as Tate will count toward the compensatory pick formula, likely at the fourth-round level (check out our comp pick tracker here).

In his new home in New Jersey, Tate will be the No. 1 receiver. In Philly, he was barely the No. 3.