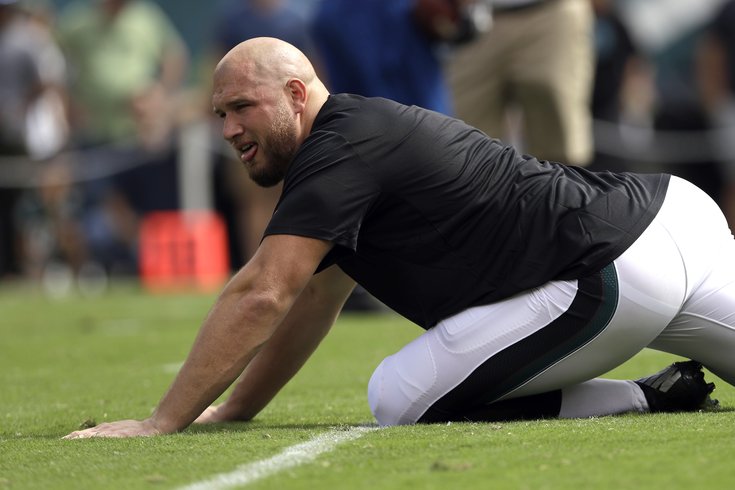 The timeline art of seduction.

Back on August 9th, it was reported that Lane Johnson was facing a suspension for his second violation of the league's policy on performance enhancing drugs, only nothing happened for six weeks to the day.

According to Jeff McLane of the Philadelphia Inquirer, Johnson's suspension is finally coming, pending an appeal hearing.

The appeal hearing is scheduled for Oct. 4 and shortly thereafter a neutral arbitrator will render a decision. Johnson will play on Sunday against the Steelers. The Eagles have a bye the following week.

If the arbitrator upholds the suspension, Johnson will be suspended for the next ten games, starting with the Lions game on Oct. 9. He would be eligible to return to the team on Dec. 12 and play in the final three games of the regular season.

Shortly after news of the suspension broke in August, the Eagles began shuffling their offensive line to prepare for the change. Johnson moved to the second team offensive line both in practice and the preseason games, with LG Allen Barbre shifting out to Johnson's RT spot. Rookie Isaac Seumalo and free agent acquisition Stefen Wisniewski both got chances to start at LG in preseason games in place of the vacated Barbre.

The delay arguably worked to the Eagles' advantage, as they have started the season 2-0 behind rookie quarterback Carson Wentz. A full, intact version of the offensive line certainly helped Wentz get his feet wet.

If Johnson's suspension is not reduced from 10 games to something shorter, he will return for the Eagles' Week 15 game against the Ravens in Baltimore, before a two-week stretch against two division rivals -- the New York Giants and Dallas Cowboys -- to close the season.