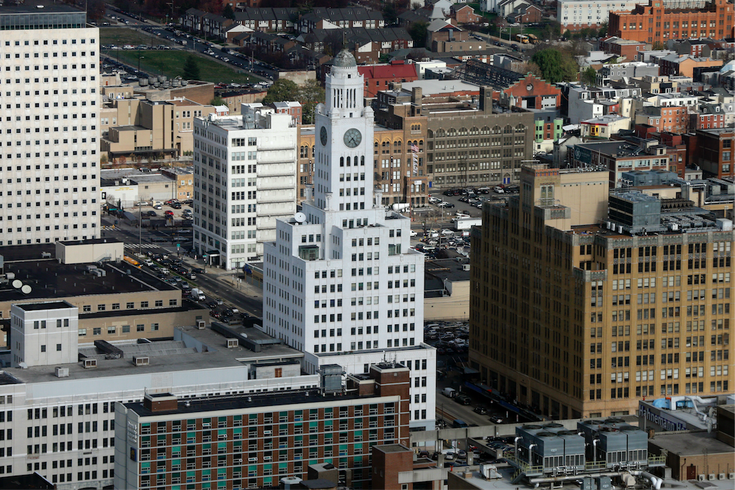 The building, center, formally owned by the Philadelphia Inquirer is seen Tuesday, Nov. 24, 2015, in Philadelphia.

The Philadelphia Police Department will eventually leave its current headquarters at the Roundhouse on 7th and Race streets, but it may not happen when and where expected.

Sources told PhillyMag on Tuesday that the PPD and Mayor Kenney are considering an alternative to an existing plan that would move police, the Medical Examiner's Officer and the Health Department to the historic Provident Mutual Life Insurance building at 46th and Market streets.

Instead, Kenney and the PPD may be looking at the old home of The Philadelphia Inquirer at 400 N. Broad Street, currently owned by Tower Investments CEO Bart Blatstein.

Any change in course would conflict with the $250 million West Philadelphia project, which broke ground in 2014 with plans to transform into the Public Safety Services Campus. Spearheaded by former Mayor Nutter, the proposal at the 13-acre site includes a public plaza and a $675,000 art installation. The campus is projected to open in 2018 if work continues as planned.

At various points in recent years, reports have emerged that the Roundhouse is in poor shape — from broken toilets to fleas and cockroaches. Since the West Philly plans surfaced, preservationists have called for the modernist structure, built between 1959-1962, to be maintained as an architectural landmark and studied for potential reuses.

When reached for comment, Kenny spokesperson Mike Dunn provided the following statement about the report:

The Kenney administration is in the midst of a thorough review of plans developed by the previous administration to relocate Police Headquarters and the Medical Examiner’s Office to 4601 Market Street. This is due diligence given the scope and anticipated cost of the entire project.

In light of this review, it is incumbent on the administration to simultaneously review various options, while we also continue work at 4601 Market to move the site’s improvements along. The administration is committed to choosing a site that meets the needs of the affected departments, particularly the Police Department, and that is a responsible choice for taxpayers.

Property records kept by the city of Philadelphia show that the old Inquirer Building was purchased in Oct. 2011 for $22,650,000 and has a 2016 market value of $17,350,000. The Mayor's Office did not provide a comment on any specific interest in the property.