Malcolm Kenyatta seeks a seat in the Pennsylvania House 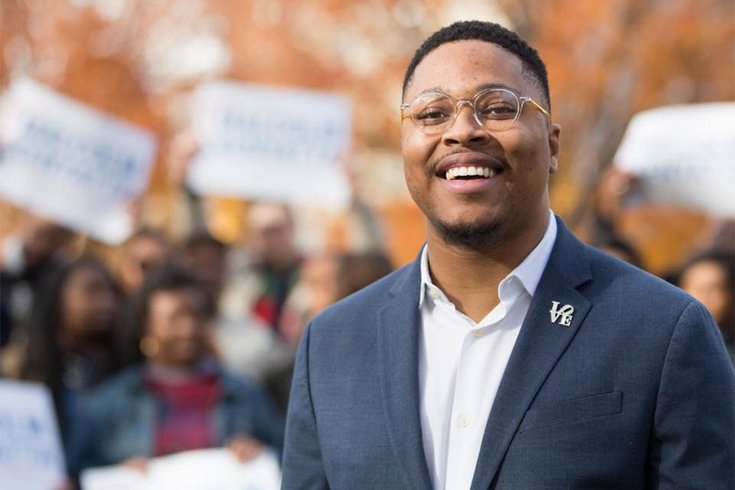 Malcolm Kenyatta is a candidate in the 181st Legislative District in Philadelphia.

A Philadelphia candidate for the state House was the subject of anti-gay posters circulated on Election Day, according to LGBTQ Nation.

Malcolm Kenyatta, a Democrat running for the open seat in the 181st Legislative District, would become the second openly-gay lawmaker in Pennsylvania, if elected in November.

The posters depicted a picture of Kenyatta and his former husband, Terrell Green, on their wedding day. A red, circular "No" symbol was superimposed over the picture.. A message to the right of the photo reads "SAY NO!!!!!"

The picture includes a caption from Kenyatta thanking Green for his love. "Thank you for always being in my corner and for being more than my best friend," the message reads. "Thank you for this 1st year of marriage – I look forward to many more."

Kenyatta and Green have been divorced for more than a year.

The posters reportedly appeared throughout the district on Tuesday as voters headed to the polls for the primary election.

Kenyatta's campaign did not immediately respond to a request for comment.

Green posted a message to Facebook, saying the former couple's personal business and orientation "should have no bearing" on Kenyatta's job and work ethic.

"I hope the person who is hanging these hateful fliers around the polling places of 181st district gets exposed and held accountable for spreading hate messages on our day that we all vote to have a voice and seat at the table," Green wrote. "This person took a personal picture from our wedding album and put hate on it!"

Kenyatta is running against four other Democrats for the party's nomination – Lewis Nash Sr., Lewis F. Thomas III, Jason Alexander Deering and Gilberto Gonzalez. The winner will face T. Milton Street, who is running unopposed on the Republican ballot.

Kenyatta, 27, of North Philadelphia, formerly served as a delegate at the 2016 Democratic National Convention. His start in politics came early – he ran to be his junior block captain at age 11.

A Temple University graduate, Kenyatta works for the Greater Philadelphia Chamber of Commerce. He has served as a member of Smith Memorial Playground and Playhouse, Equality PA and the Philadelphia Chapter of National Organization for Women's Education Fund.