Reward offered for information on attempted bank robbery in Kensington 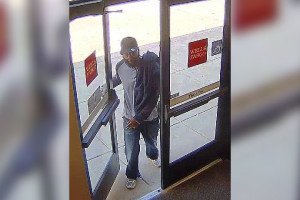 The Federal Bureau of Investigation and the Philadelphia Police Department began asking the public for help Friday to identify a man in connection with an attempted bank robbery in Kensington.

The incident occurred May 23 around 9:30 a.m. at a Wells Fargo Bank branch at 1837 East Allegheny Avenue.

Authorities say a man entered the bank and showed a teller a note demanding money. The teller was able to activate an alarm and the suspect fled the area without receiving anything.

The male suspect is described as a 5-foot-7 Latino in his 30s with a medium build and black beard.

An unspecified cash reward is being offered for information that leads to the suspect's arrest.