Rob Lowe on his one-man show, his Philly connection and 'trusting the process'

The veteran actor is bringing his show, "Stories I Only Tell My Friends," to the Kimmel Center this weekend. 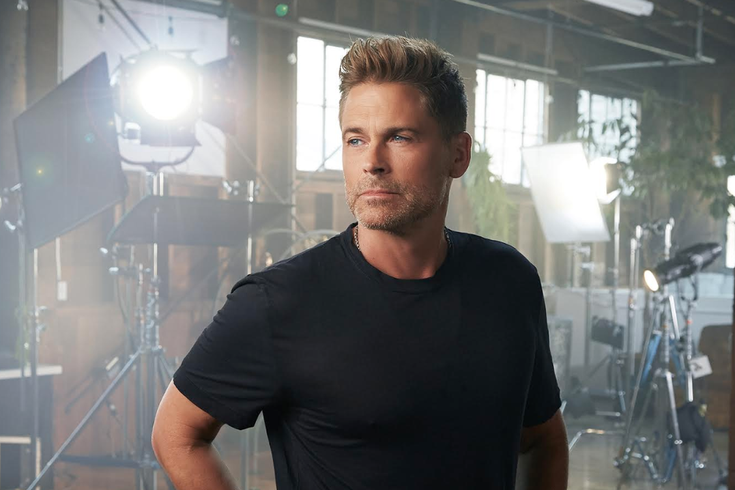 Rob Lowe, star of "Stories I Only Tell My Friends LIVE"

He's played smaller roles in legendary comedies such as "Wayne's World," "Tommy Boy," and "Austin Powers." He's been a regular on beloved TV series like "The West Wing" and "Parks & Recreation," and he's also had a whole other career as a leading man in Lifetime movies, such as "Drew Peterson: Untouchable" and "The Christmas Shoes." More recently, he's starred in both a reality show and a game show.

Lowe will tell stories from many of the above- and a lot more- in "Stories I Only Tell My Friends Live," a one-man show that he's been taking on the road for the last couple of years. That show arrives at the Kimmel Center on Friday.

PhillyVoice recently spoke with Lowe about the show, his career, and a couple of unlikely Philadelphia ties, including the time he said a certain Sixers-related phrase on a network sitcom.

Lowe added that the show is about 50/50 in terms of stories about his career and his personal life. He wrote a pair of best-selling memoirs, one of which was also titled "Stories I Only Tell My Friends," but said that doing the live show was "in lieu of writing a third book," so there will be quite a bit of new material in there.

The show will also include a Q&A segment, in which "people can ask me anything," Lowe said. "One of the things I've learned, and it makes me feel so good, is that there isn't one thing- it could be Brat Pack, St. Elmo's Fire, Outsiders, West Wing, Grinder, Parks and Rec, Behind the Candelabra. You just don't know- and that's the kind of career you want."

In all of the movies and TV shows he's made, Lowe has never filmed anything in Philadelphia. But he does have a couple of surprising ties to the city- including one that goes all the way back to the American Revolution.

"I may have the best connection to Philly that a person can have," Lowe said. Appearing on a 2012 episode of the genealogy show "Who Do You Think You Are," Lowe discovered that his "five-time great grandfather" arrived as a conscripted Hessian soldier to fight against George Washington in 1776, during the Revolutionary War.

"It was at the Battle of Trenton, when Washington crossed the Delaware. He was taken prisoner by George Washington and marched to Philadelphia where he was imprisoned, and eventually granted his freedom, became an early America citizen, worked for the Revolution, which then made me a son of the American Revolution."

More than two centuries later, Lowe became a part of Philadelphia lore for another reason: He starred on a short-lived Fox sitcom called The Grinder, in which he played an actor on a canceled lawyer show who tries his hand at being a real-life lawyer.

On one episode of the show that aired in April 2016, Lowe's character used the phrase "Trust The Process,"  before it became an all-purpose Sixers slogan associated with support for the Sixers' Sam Hinkie-era rebuilding effort. It wasn't a coincidence: Mike Levin, a co-host of the staunchly pro-Process Rights to Ricky Sanchez Sixers podcast, was a writer on The Grinder and claimed responsibility for putting those words in Lowe's mouth.

"I got Rob Lowe to trust the process, and that's more than you can say for any other network comedy in recent memory," Levin tweeted, after The Grinder was cancelled the following month. "My work was done."

Lowe said that he remembers this incident, and described it as one of his favorites of the many "inside baseball easter eggs" that were included on that show.

"I'm very up on Philadelphia sports," the Ohio native and longtime California resident said, adding that he was "a great friend" of the late hockey star Peter Zezel, who played for the Flyers in the 1980s.

Aaron Sorkin's political drama "The West Wing," on which Lowe starred for its first four seasons as White House advisor Sam Seaborn, celebrates the 20th anniversary of its premiere this fall. Lowe describes the show as "one of my favorite things I've ever done."

"I love that it has, almost in a weird way, more resonance now, than it ever did even then. It's just a part of people's lives still, it's really an amazing thing to be a part of. It was always a wish fulfillment show, when it was made, it was sort of a what-if, if only we could have a situation… now, 20 years later, I think it would not be wish fulfillment, but it would literally be science fiction."

As for the other much-loved NBC series he starred in about public service, Lowe feels similarly about "Parks & Recreation," on which he starred in the second through sixth seasons, sharing that the show's co-creators, Mike Schur and Greg Daniels, were huge West Wing fans.

"The idea was, if the drama of public service took place in the White House, the comedy should take place in the parks and recreation department. I love Parks and Rec," he said, adding that the half hour comedy has been discovered by numerous fans on Netflix, where it's been one of the most popular shows.

As for current projects, aside from the live show, Lowe recently finished his first season as host of "The Mental Samurai," a Fox game show from the creators of American Ninja Warrior.

Rob Lowe: Stories I Only Tell My Friends: Live is coming to the Kimmel Center at 8 p.m. on Friday, May 17. Tickets are available here.