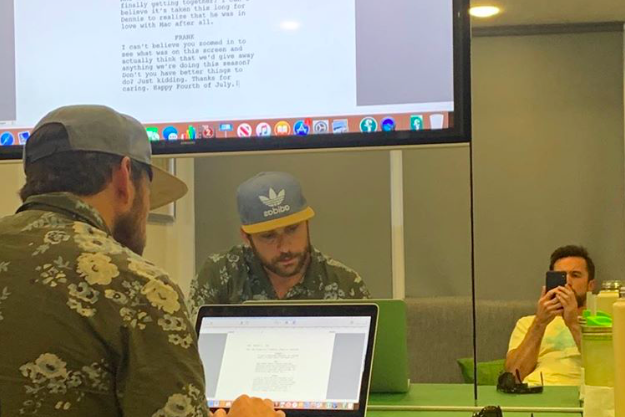 Charlie Day and Rob McElhenney fine-tune a script for Season 14 of "It's Always Sunny in Philadelphia." The portion of the script that readable in the photo turned out to be a prank, but the new season debuts Sept. 25 on FXX.

Season 14 of "It's Always Sunny in Philadelphia" officially has a Sept. 25 premiere date, which means series co-creators Rob McElhenney and Charlie Day are busy scrambling to make sure their scripts are in peak form.

McElhenney took the internet by storm last week when he appeared at the building that formerly served as the fictional Scranton headquarters for Dunder Mifflin on the hallowed set of "The Office."

RELATED: Enter 'It's Always Sunny in Philadelphia' contest to be an extra on the show, visit Paddy's Pub

He's not quite done toying with fans of "It's Always Sunny," even while getting work done on the upcoming season.

On Tuesday, McElhenney took to Instagram to share a picture of Charlie Day in front of laptop working on a script for a new episode. The photo was set up in such a way that if you zoom in on the monitor above, you can read the lines of dialogue.

Fully aware of this, Day and McElhenney concocted a wild plot line: Charlie Kelly is "gone" (possibly dead) and Mac and Dennis are now a gay couple. Here's the excerpt:

Dee: And what about Dennis and Mac finally getting together? I can't believe it's taken this long for Dennis to realize that he was in love with Mac after all.

Frank: I can't believe you zoomed in to see what was on this screen and actually think that we'd give away anything that we're doing this season? Don't you have better things to do? Just kidding. Thanks for caring. Happy Fourth of July!

McElhenney and Day are well on their way to owning the title as creators of the longest-running live-action sitcom in American television history. It's nice that they know we care enough to fall for their shenanigans.