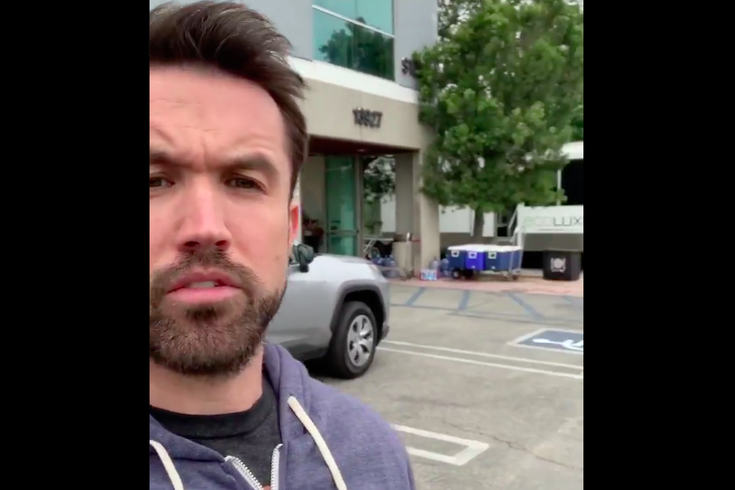 Rob McElhenney from "It's Always Sunny in Philadelphia" trolled the cast members of "The Office" by taking over the parking lot of Dunder Mifflin.

The cast of "It's Always Sunny in Philadelphia" is cementing a rivalry with another popular TV sitcom.

Creator of "Always Sunny" Rob McElhenney took to social media on Thursday from the set of the Philly show, but he wasn't in Paddy's Pub.

MORE: Enter 'It's Always Sunny in Philadelphia' contest to be an extra on the show, visit Paddy's Pub | 'The Office' is officially leaving Netflix and everything is not okay

In reality, the set of Dunder Mifflin is in Chandler Valley Center Studios in Los Angeles. "Always Sunny" is in the middle of shooting Season 14, which is set to premiere on September 25.

"Apparently this is Dunder Mifflin, I guess, where they shot 'The Office,'" McElhenney posted on Instagram, and tagged all of the cast members in the video, too. "I wasn't 100% sure of that. But they're gone now. They're off the air. And now you got — sorry, Carell."

The bar inside Dunder Mifflin is now called Paddy’s.

Jenna Fischer, who played Pam Beasley on the show, commented: "I'll be right there."

"It's Always Sunny in Philadelphia" started airing in 2005, the same year as Steve Carrell's "The Office." While the latter only ran for nine seasons and called it quits in 2013, "Always Sunny" has always been proud of its long-running reputation of 14 seasons and counting.

"I guess your show got canceled or whatever, but we're still doing ours," McElhenney says in the video. "So we're doing it here."

He also shows Danny DeVito (not wearing pants) and Charlie Day outside of their trailers in the parking lot in the video to prove it.

There are no reported plans for any kind of crossover episodes or story lines, so the cast of "Always Sunny" is most likely just using the space for their trailers.