Enter 'It's Always Sunny in Philadelphia' contest to be an extra on the show, visit Paddy's Pub 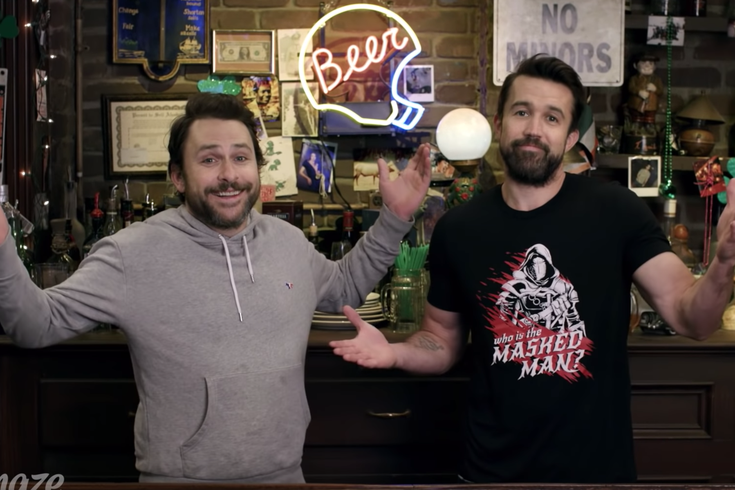 Charlie and Mac want you, the world's biggest "It's Always Sunny in Philadelphia" fan, to enter their fundraiser for a chance to land a gig as a background actor in the show's upcoming 14th season on FXX. Not a bad plan.

The "It's Always Sunny in Philadelphia" is a collection of no-good scoundrels on the screen, but the actors and actresses starring in the show all seem like actually super-cool people.

Ahead of the never-ending show's 14th season, the "Always Sunny" cast has launched a contest and fundraiser, aimed at raising money for a good cause, and the prize is a doozy: You and a friend will be flown to Los Angeles, where you (and only you, not the friend) will be featured as a background extra in an episode of "Always Sunny," presumably for the upcoming 14th season.

Here's how the fundraiser page breaks it down:

"We hope you can read, because we’ve got news. The Always Sunny gang has added a new member: YOU. What’s up, b*tches! You and a friend will join the cast on set to finally find out why it’s always sunny in Philadelphia (they film in LA!)—and be featured in the background as an extra.

"You’ll film while your friend cheers you on, maybe work on your dance/karate moves and be part of the funniest show on TV for 13 seasons and counting. Then to celebrate, you’ll share a toast with the gang on the infamous Paddy’s Pub set. Cheers! Flights and hotel included."

And here's a video the cast put together, because more "Always Sunny" content is always good:

The contest is billed as a fundraiser for The Hole in the Wall Gang Camp, an organization founded by Paul Newman in 1988. The organization provides camp-style experiences to thousands of seriously ill children and their family members each year in the Northeast and Mid-Atlantic regions of the United States.

The fundraiser part of the contest encourages, and also incentivizes, donating money as part of your entry. One dollar lands you 10 entries into the drawing, up to 50,000 entries for a $5,000 donation. There is, however, a free entry option, which lands you precisely one entry into the drawing. The odds of you winning at that point will be staggeringly slim, but it won't be impossible.

To be safe, though, you might want to donate. Then you can tell Charlie about your idea for a spin-off flavor of Fight Milk.

The contest's end date is July 9.