Where to eat and drink in Philly this Fourth of July 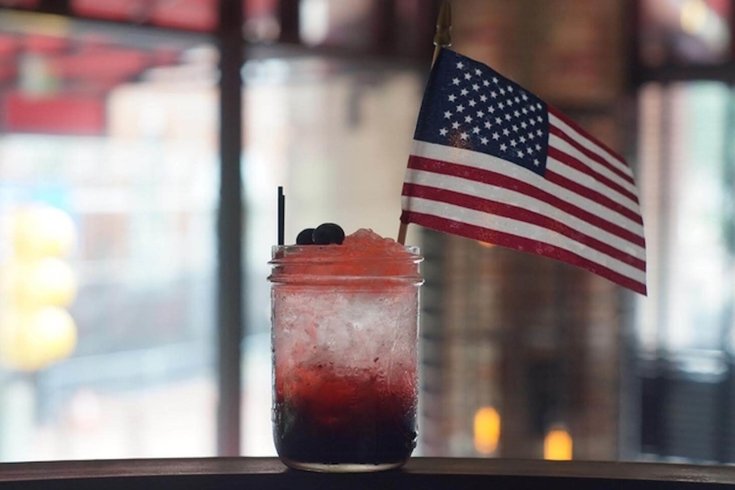 Red Owl Tavern, located across from Independence Hall, will be serving up Independence Jawn cocktails all day. These specially crafted red, white and blue cocktails are made with muddled blueberries, Demerara rum, white rum, Peychaud's bitters, and extra blueberries.

Fourth of July is next week, and while it seems like everyone is headed to the shore, there's nothing wrong with a little R&R here in Philly.

The city is going to have all kinds of specials and deals throughout, including the grand opening Jet Wine Bar's pop-up wine garden on South Street. So, while you're building up your All-American vibes for a picturesque scene down by Penn's Landing or at the Benjamin Franklin Parkway, here are a couple of food and drink stops to make along the way.

If you're getting ready to watch the fireworks at the Philadelphia Museum of Art, feel free to grab a spot at Assembly Rooftop Lounge and sip on some frosé ($14). It's located on the Ben Franklin Parkway at the Logan Hotel, perfect for catching the fireworks.

But if you're just hanging out in Old City or at the Constitution Center, you can make a pit stop at The Bourse, which will be open all day and serving patriotic dishes across their 30 vendors.

Those seeking an extra special cocktail, Red Owl Tavern, located across from Independence Hall, will be serving Independence Jawn cocktails all day. These specially crafted red, white and blue drinks are made with muddled blueberries, Demerara rum, white rum, Peychaud's bitters, and then topped with more blueberries.

Planning on heading to Penn's Landing to catch the Camden fireworks? Twisted Tail is situated near Front Street, just blocks from Penn's Landing, making it an ideal spot to grab a drink and some food before heading off to Delaware Avenue. The restaurant will be serving orders of BBQ smoked ribs ($12) and fried chicken ($19). The Fourth of July celebrations start at 9:30 p.m.

But if you're feeling more of a burger, Royal Boucherie on Second Street in Old City will be serving a special Independence Day meal as well. The restaurant will serve up Boucherie burgers alongside a draft beer of their choosing for $20.