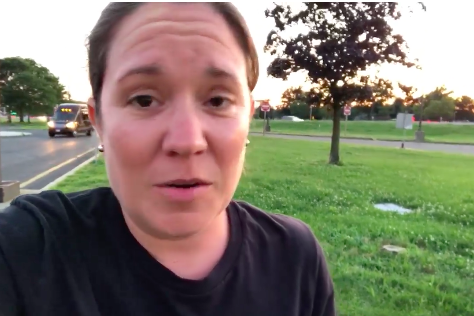 Kristen Hampton, an anchor at WBTV Good News in Charlotte, North Carolina, was shocked by her first experience driving in New Jersey.

Say what you will about New Jersey drivers, but transportation statistics in recent years actually suggest they're some of the best in the United States — at least in terms of overall safety.

A 2015 analysis of car insurance claims found the Garden State was among the safest in terms of traffic and speeding fatalities. The report credited New Jersey's tough laws on cell phone usage and seat belts, among other proactive measures designed to keep the roads safe.

Even when they do screw up, New Jersey drivers manage to pull off seemingly impossible feats, as seen below.

In Philly, where numerous reports rank drivers among the worst and most aggressive in the country, it's possible that New Jersey drivers just seem terrible due to their inability to adapt to the terrible driving we've integrated and mastered here. Something to consider, but never admit.

All of this is meant to be a caveat for the rant you're about to hear from Kristen Hampton, a newscaster with Charlotte's WBTV Good News.

During a recent road trip, Hampton pulled off at a rest stop to talk about her experience on the New Jersey Turnpike. Her reaction would best be described as terrified and amazed.

The point about gas pump attendants is well-taken, considering that the prohibition on drivers filling their own tanks is one of the strangest enduring laws of the land (in Oregon, where this is also common, it isn't outright against the law to pump your own gas).

Hampton's astonishment at the food court concept is hilarious, on the other hand. Are food courts really that uncommon in North Carolina? If the state is truly burger, bathroom and vending machine deficient, that's a story Hampton should pursue. The people of North Carolina deserve better.