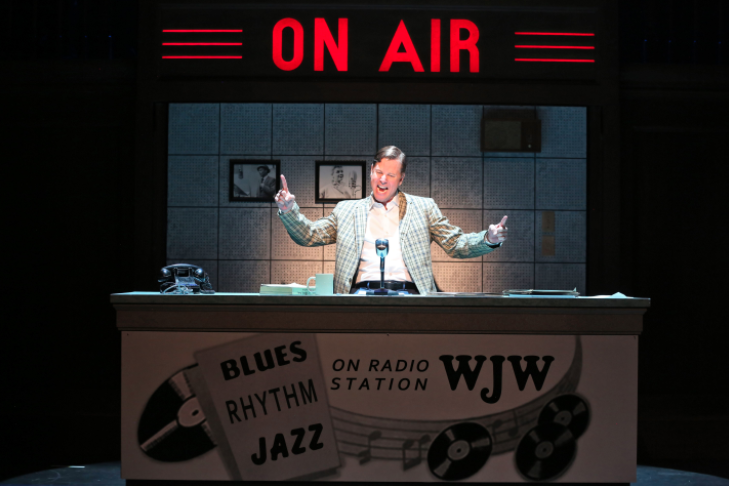 The bulk of the play is presented as a dream-hallucination that the physically, emotionally and financially exhausted Freed has in the last hours of his life.

On the surface, the late Alan Freed is hardly a sterling subject to lionize in a musical theater production. Freed, who died at age 43 in 1965, was, by all accepted accounts, a philandering alcoholic who had no problem taking credit—primarily financial—for writing hit songs despite a complete lack of involvement in their creation.

But Freed was also the guy who knocked American popular culture permanently off its axis by introducing (but not inventing) the phrase “rock and roll,” which he initially applied to rhythm and blues music made primarily, if not exclusively, by African-American musicians. That led to the first mainstreaming of African-American art into what was then a solidly white culture—a circumstance freighted with historical portent.

As such, he probably is a worthy subject for the Broadway-style treatment. And “Rock and Roll Man—The Alan Freed Story,” which, through Oct. 1, is having its world premiere at New Hope’s Bucks County Playhouse, is a perfectly fine telling of that somewhat sordid, mostly celebratory tale.

The production is animated by a first-rate cast and a solid and attention-holding, if not particularly eloquent, book (by Gary Kupper, Lary Marshak and Rose Caiola). It also boasts a never-dull, hybrid score that incorporates numerous golden oldies (including “Roll Over Beethoven,” “All I Have to Do Is Dream,” “Rock Around the Clock,” “Ain’t That A Shame,” and “Tweedle Dee”) with a handful of original songs (composed by Kupper) that generally succeed in propelling/explaining the story.

The bulk of the play is presented as a dream-hallucination that the physically, emotionally and financially exhausted Freed has in the last hours of his life. He is in that depleted state because he was the most prominent victim of 1959’s federal investigation into “payola,” whereby disc jockeys took cash, gifts and services in exchange for playing certain records.

In the nightmare, he sees himself in a courtroom defending himself against charges he ruined America by giving to its impressionable teenagers that sex-inducing, drug-use-encouraging, race-mixing scourge called “rock and roll.” The word “hallucination” certainly applies here: In his reverie, he conjures FBI icon J. Edgar Hoover as the prosecutor and proto-rocker Little Richard as his defense attorney.

Yes, it sounds silly, but the premise somehow works.

“Rock and Roll Man” is to be lauded for its accuracy batting average, and its warts-and-all approach to portraying Freed. For those interested in the subject, there is a lot to learn here, from Freed’s lifelong belief in equality for blacks to how novelty-rocker Screaming Jay Hawkins found himself performing his signature hit, “I Put A Spell on You” as he exited a closed coffin while dressed in exaggerated voodoo drag (it was Freed’s idea).

The show gets the basic facts correct, but this surely isn't a documentary; plenty of info is fabricated for the sake of the story. For instance, the play has the Hawkins episode occur at a New York concert, when it actually happened in Cleveland. And some quick Googling indicates Frankie Lymon never caused a stir by kissing a white girl on a live Freed-hosted telecast, although he did dance with one, which was scandalous enough to mid-20th-century white America.

In the nightmare, he sees himself in a courtroom defending himself against charges he ruined America by giving to its impressionable teenagers that sex-inducing, drug-use-encouraging, race-mixing scourge called “rock and roll.”

But for some reason, the most annoying (if admittedly inconsequential) gaffes are sartorial in nature: In the production, Chuck Berry, Little Richard and Fats Domino do not sport greasy “process” haircuts, while Bill Haley appears sans his trademark spit curl.

And considering that many of the most enduring images of Freed portray him in a bow tie, it's somewhat vexing that he sports an open-collar shirt from start to finish.

But that is mere nitpicking, as there is much to enjoy and appreciate. As Freed, Broadway vet Alan Campbell (“Sunset Boulevard”) is sturdy and completely sympathetic. He astutely brings out both Freed’s ample amounts of chutzpah, as well as his insecurities and vulnerabilities. And his pipes easily handle Kupper’s original, ballad-leaning tunes.

It's way cool that George Wendt—whose immortality is assured thanks to his role-of-a-lifetime as shlumpy barfly Norm Peterson on “Cheers”—is seen in the flesh here. He aces a role that requires little truly heavy lifting, in large part by playing the controversial “G-man” with just the right tough of cartoonish exaggeration. But the production hardly rises and falls on his participation.

Both director Randal Myler and choreographer Brian Reeder do wonders within the confines of the Playhouse stage’s limited size. Myler’s pacing is especially strong: Whenever things start to get a might talky, he whips out another first-gen rock touchstone and the energy level spikes like the blood sugar of a hypoglycemic person who's just scarfed a Hershey Bar.

In all, “Rock and Roll Man” is a toe-tappin’ history lesson that is worth the trip to New Hope.