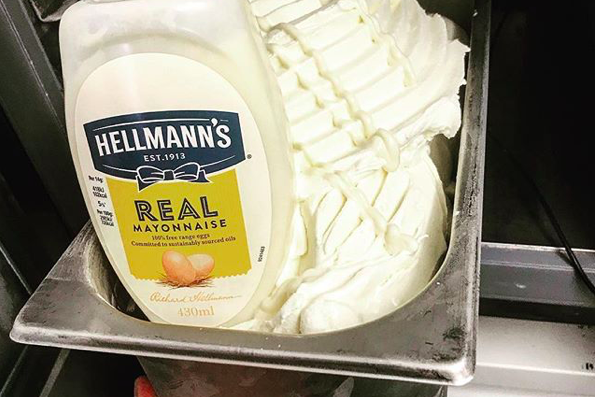 ICE Falkirk Artisan Ice Cream. Have you seen this? Have you heard about this, folks?

As the name indicates, it’s an ice cream shop in Falkirk, which is located about an hour west of Edinburgh, Scotland. Mercifully, that is really far away. You’ll see why that’s important shortly.

RELATED: Eggless mayo manufacturer wins right to use 'mayo' in product name | Pickles are an abomination to human sensibility | Pickle Juice Soda proves that society's lost any sense of respectability

What the name doesn’t indicate, however, is how it became the subject of a heated, viral controversy courtesy of an Instagram post last week.

“Who knows a mayo addict?” it read next to a photo of a bin of ice cream and a container of Hellman’s Real Mayonnaise.

“It’s literally ice cream mixed with mayo,” claimed the video that ICE posted on its Facebook page about a product that’s gotten widespread attention in the past week (see here, here, here and here).

“Nothing like a cold dollop of mayonnaise ice cream on a hot day.”

I am not exaggerating when I say that this is the most repulsive dessert news I’ve heard in ages.

Imagine, if you will, it’s a really hot day. You need some ice cream to cool both your temperature and disposition. You’re given an ice-cream cone. It looks as if it’s vanilla, which is a very good ice cream flavor. Then, you have a taste.

You instantly feel as if you’ve just grabbed a hoagie wrapper from a shaded trashcan outside Wawa and licked it for sustenance. That’s what mayonnaise ice cream is. I can't believe these words even need to be typed, even on a limitless medium like the Internet.

Dessert is meant to be fun.

This flavor is not that.

You know what would taste better on a hot summer day? That’s right, everything up to and including Sarcophagus Juice.

Don’t be one of those mayo boys or girls who pretends it is for shock value.

Don’t be one of those edgy foodies who thinks this would be a good idea to offer in Philly. It wouldn’t. You already know this.

But do weigh in on the poll embedded herein about this very important controversy. I'm sure the people at ICE mean well, but we need to stand up and say "NO" to the slippery slope that mayonnaise ice cream represents.