Will it give us super powers? No, probably not 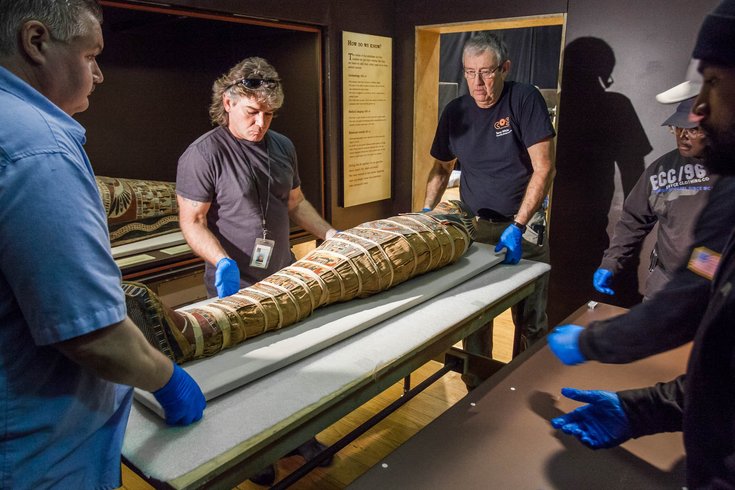 Scientists in Egypt recently discovered a tomb with three skeletons inside in Alexandria, Egypt. Meanwhile in 2016 in Philadelphia, Terry White, the traveling exhibit supervisor for the Center of Science and Industry, center, oversees the installation and placement of Annie, a 2000-year-old mummy which was on loan to the Franklin Institute for the Lost Egypt exhibit, Tuesday, January 26, 2016.

Just when you thought the Internet couldn't get any more bizarre, enter the Egyptian sarcophagus story.

If you haven't been following this phenomena, buckle up. It started on July 1, when Egyptian scientists uncovered a black, granite sarcophagus in Alexandria, Egypt. The Ministry of Antiquities discovered that the tomb probably dated back to the Ptolemaic era, between 305 and 30 BCE and had remained unopened since.

There was a lot of speculation surrounding what (or who) was inside the coffin — could it be Alexander the Great, whose body has never been found? People needed to know.

I say we open that creepy Egyptian sarcophagus and roll the dice. Things really can’t get any worse.

Does anyone know when they are opening that black Egyptian sarcophagus? I want to greet the sun one last time before the stygian darkness embraces us all.

So last week, scientists opened the coffin and to some people's delight (or dismay if you're one of those) no treasure or ancient curse was found. And it wasn't Alexander. Darn.

Mostafa Waziri, secretary-general of the Supreme Council of Antiquities, was at the burial site the day scientists opened the sarcophagus.

"We've opened it and, thank God, the world has not fallen into darkness," he told the BBC. "I was the first to put my whole head inside the sarcophagus ... and here I stand before you ... I am fine."

But scientists did find three skeletons sitting in a red liquid, which was actually just sewage that had leaked into the tomb and disintegrated some of the remains. And apparently, it absolutely reeked. Scientists told the media they had to leave the site for a while to collect themselves before returning to the dig.

#Egyptian archaeologists have dashed hopes that a newly-discovered ancient sarcophagus might contain the remains of Alexander the Great, finding instead a mummified family swimming in red liquid https://t.co/FWfQoXuAkh pic.twitter.com/jcGe1QzhpJ

Experts speculated that the skeletons were part of a family, but concluded the remains most likely belong to three military officers. One of the skeletons had remnants of an arrow still in the head, and most likely died in conflict, a ministry official told CNN.

Has anyone ever been more owned than the Egyptian guy who took an arrow to the brain, got thrown in a cracked sarcophagus with two other dudes, then marinated in poop water and dissolved, and when it’s opened everyone is just disappointed you’re not Alexander the Great?

Disappointed by the Egyptian sarcophagus that got opened today. pic.twitter.com/2O3xwUYJhU

A Change.org petition was created after the sarcophagus' opening, and this is when things get weird.

"we [sic] need to drink the red liquid from the cursed dark sarcophagus in the form of some sort of carbonated energy drink so we can assume its powers and finally die," the petition reads.

Someone using the handle "innes mck" had collected more than 18,000 signatures on the petition as of Monday afternoon from people who agree that, yes, we should drink the "mummy milkshake" poop water that's been fermenting bones for hundreds of years.

Some of the reasons for signing: "I wanna be immortal," "I'm thirsty," "I want my share of the power," "Because freedom," "We must be enlightened," and so on.

So much for the world-ending curse; Egyptian sarcophagus has finally been opened to reveal it was "full of'sewage, in addition to three skeletons.'' per the Egyptian supreme council of antiquities. Its the sarcophagus 2018 deserves.

They opened that Egyptian sarcophagus & now we're getting Cats the movie.