Residents allowed back in homes after massive truck blaze in Pennsauken 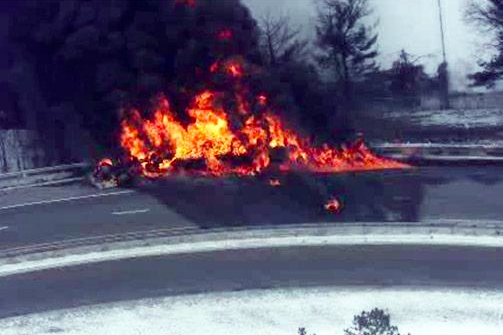 Tanker truck bursts into flames on ramp from Rt. 90 to Rt. 130 in Pennsauken.

Pennsauken residents who were evacuated after a tanker truck overturned and burst into flames on the ramp from Route 90 to Route 130 on Monday were allowed back into their homes after several hours, 6ABC reports.

Massive amounts of smoke filled the air after a tanker carrying 8,900 gallons of fuel ignited crashed around 11 a.m. Nearby residents were evacuated soon after the crash as crews fought the blaze.

Brian Ervin, 46, the driver of the tanker, lost control on the on-ramp and barreled through the guard rail, which ruptured the tanker, NBC Philadelphia reported. Ervin was alone in the truck and was able to get out of the vehicle, authorities said. Ervin did not suffer any injuries.

Nearby homes were being evacuated as a precaution.

Hazmat crews arrived on the scene to smolder the flame with foam instead of water so that gasoline would not be rinsed into nearby storm drains.

Flames were under control by 12:20 p.m. The highways are shut down in the area.