Roving author reflects on her stay in Philly, future travels

By Jake Blumgart and Steve Teare 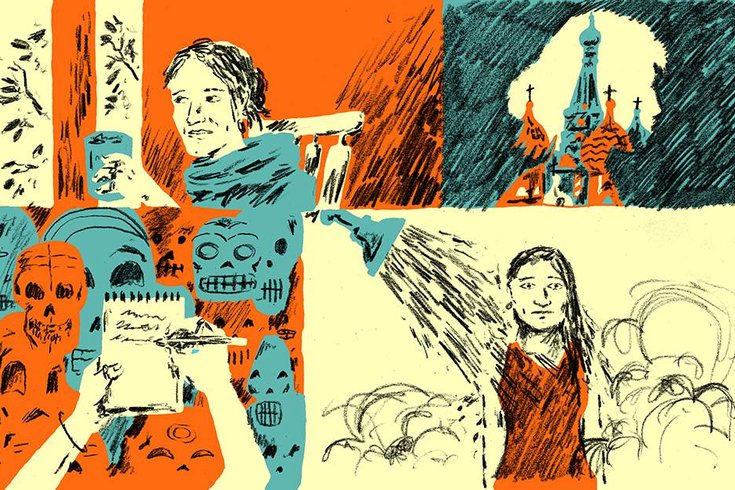 A year ago, Philadelphia lost Anna Badkhen, a roving freelance journalist who made Cedar Park — to the west of the University of Pennsylvania — her home base for years.

The author of five books, including one on the Afghanistan War as well as "Walking With Abel," a tale of her trek across the middle of Africa with one of Earth’s last nomadic people, she left West Philadelphia to research her latest work in a small fishing village in Senegal.

Although Badkhen, 40, has covered many of the conflicts that have scarred the world in the early years of the 21st century, her more recent books have more closely resembled travelogues than war reporting. They interlace personal observation with poetry, history and her own drawings.

She returned to America in May and is living in West Texas while writing "Fisherman’s Blues," which she describes as “a book of magical nonfiction about boundaries.”

Before she left the city, however, she sat on the porch of her West Philadelphia Victorian townhome in the sweltering heat of August 2015 to chat about the city she was leaving and remember the country of her birth. She sipped tart homemade lemonade to stay cool.

"In a house there is a place to bathe, you can fetch water from a well, you can eat home-cooked meals. And you actually watch people live their lives.” – Anna Badkhen, author of a book on the Afghanistan War

Badkhen grew up in the Soviet Union. (That’s why she hates the cold today, and a reason she is unlikely to ever move back to Philadelphia.) After the collapse of the Soviet empire, she got a job as a secretary at a newspaper in St. Petersburg. She wasn’t very good at it, but instead of firing her, the bosses gave her a chance to work as a reporter instead.

“My first strange trip was to a morgue, in post-Soviet Russia in 1995,” remembered Badkhen. “All of the infrastructure had collapsed. There was this forensic morgue where they bring the bodies that have been killed or found by smell, people who died and had been dead for a while. It lost power. It was really disconcerting. I was very young and I came home from this morgue and walked straight to the shower and just walked into the shower in all of my clothes and all of my shoes.” 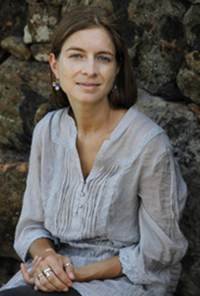 Badkhen's big break came a half decade later, after the Sept. 11, 2001 attacks, when many of the world’s major news organizations suddenly needed seasoned journalists on the ground in Central Asia. She began to freelance for U.S. publications like the San Francisco Chronicle and the New York Times.

During this time, she often lived with local families instead of staying at the big hotels frequented by international journalists, and became adept at navigating different social settings.

“Even when I was covering conflicts for a newspaper I would prefer to always live with people,” said Badkhen. “First of all it was nicer. When you are talking about Afghanistan in 2001 there is no infrastructure. If you are in a hotel you most likely have no access to a generator, no water...What happens to a five-story building when there is no power or water, it’s just horrendous.

"In a house there is a place to bathe, you can fetch water from a well, you can eat home-cooked meals. And you actually watch people live their lives.” 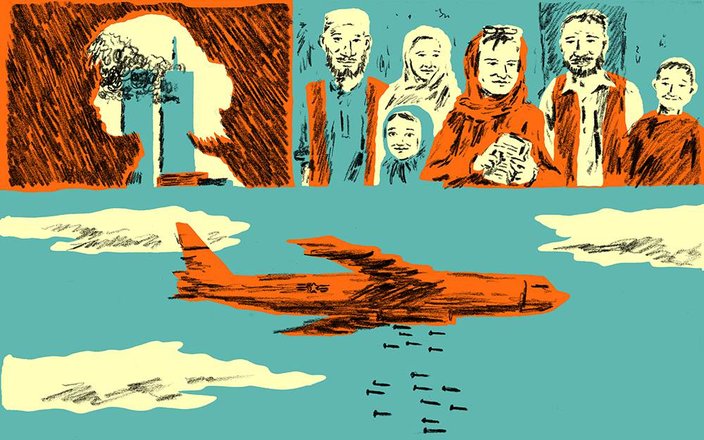 Badkhen found herself in the thick of many of the hottest warzones of the early 21st century, including Chechnya, Somalia and Iraq.

“In 2001 I lived with a family in Northern Afghanistan," she said. "You remember the Northern Alliance, that hodgepodge group of anti-Taliban guerrilla fighters. Our flip-flops on the ground. There was this aerial bombardment by America and you are living in this farmhouse and when a B-52 drops its 12-bomb round, 500-pound bombs, boom boom boom boom. The dishes rattle and the children start crying and if you stay in your hotel all you see are the fireworks, you don’t see what it does to human beings.”

In recent years Badkhen has begun to write more expansively, penning travel books of a sort. She embeds herself in remote locations and writes beautiful, sinuous accounts of life in these locales, interwoven with history, observation, poetry and her own drawings of her experiences.

Her 2013 book, "The World Is A Carpet," was based on her experiences in a tiny weaving village in rural Afghanistan. "Walking With Abel," published in 2015, reported on her time with a family of Fulani cattle herders in Mali. Her book considers how the culture and society of the largest nomadic ethnic group remaining on Earth is being dramatically altered by climate change and the War on Terror. 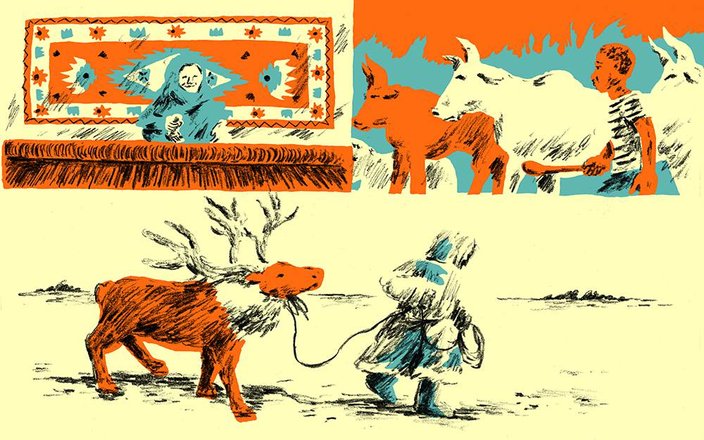 Badkhen spent seven months walking with one family for "Walking With Abel," covering about 2,000 miles in all. But her research began when she chose which nomadic people to travel with.

“I considered the reindeer herders of Alaska and the Russian Far East — they’ve been affected by climate change, too,” said Badkhen. “The way the reindeer feed is by breathing on the snow, melting it, so they can eat the moss below. But with climate change it rains more, or the snow melts, and then refreezing into ice. The ice does not melt when reindeer breathe on it. But I grew up on the 60th parallel and I hate the cold.”

With Badkhen’s epic trip behind her, she returned to Philadelphia. Although she is a nomad herself, she settled here long enough for her son to go to school.

“West Philadelphia has been very kind to me. It has a way of feeling like home,” said Badkhen. “I’ll miss it."

"Before, we lived in a town in Massachusetts that was very rural and I’m a city girl. Well, I don’t like cities anymore, but I grew up in a city so I thought we were missing a lot of the things that I had when I was growing up, culturally. Here there are so many museums, an amazing orchestra. But the schools are a disaster. When we moved here he went to a school with three subjects, reading, writing and arithmetic because it was so broke. So the schools sucked but, hey, he survived.” 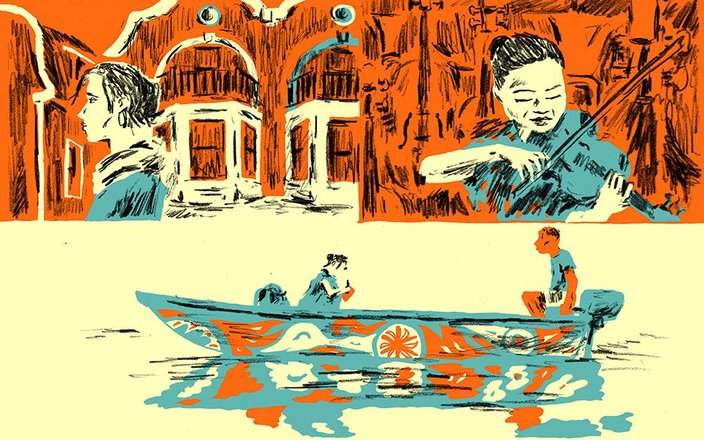 When she talked, Badkhen was taking a break from her preparations to relocate to Joal, the largest artisanal fishing port in West Africa, to research "Fisherman's Blues." Joal is a fairly small village of more than 30,000 people, 80 or 90 miles south of Dakar, the capital of Senegal.

“There are these boats, pirogue, that are long wooden boats and the boat masker stamps them with their stamp. It's a hand-painted geometrical gorgeousness,” Badkhen said. “Sometimes just the bow and the stern and sometimes the entire boat is decorated. They look like the things you use when you weave, when you make fabric for carpets, a weaving shuttle.

“When I was in Mali the fishing people called Dogon would glide on their boats, they would stand on them and pole themselves up and down the river for fish."

In Joal, however, the ocean fishermen do not pole, she said. They use oars to propel their 20-seater pirogues with a net between them. 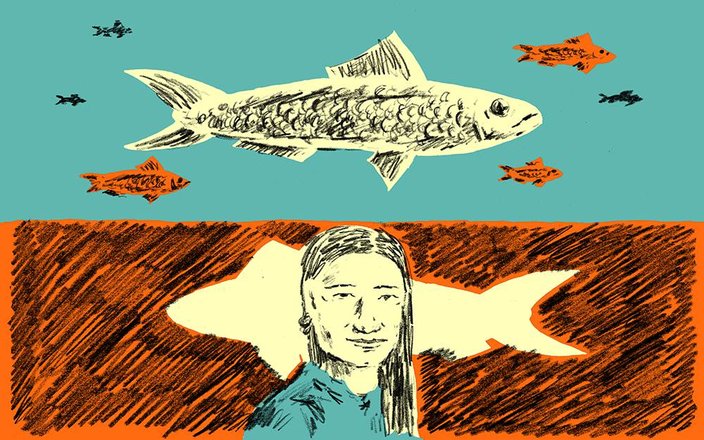 “I just watched them and they were so peaceful and beautiful even though I imagine it isn’t peaceful at all," she recalled. "I imagine it’s extremely arduous and difficult and stressful but I had never worked on the ocean in my life. I lived in Portsmouth, Massachusetts for seven years, but I’d like to know it a little better.

Badkhen explained why she has little desire to go back to war reporting.

“War is very flashy, bright colors, very easy to write about kind of. But there is so much beauty is the gray peaceful hardship, too," she said. "I think there is much more to explore, and war is just distracting. It’s an extreme whereas people who live, artisanal fishermen who work on the ocean, are out working in extremis, too.”