Safety Blitz with Malcolm Jenkins: 'I would say our backs are against the wall' 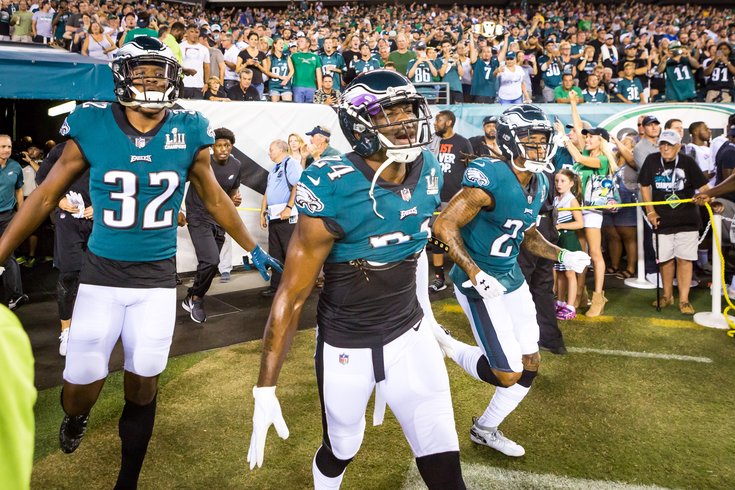 The Philadelphia Eagles take the field shortly before the 2018 NFL season kickoff game against the Atlanta Falcons.

The Eagles endured another frustrating loss, another preventable loss, and another setback where they contributed as much to their own demise as the Minnesota Vikings did in Sunday’s 23-21 defeat.

There was Linval Joseph's 64-yard fumble return for a touchdown. Then, there was Jay Ajayi's fumble at the Vikings' 5 on the Eagles' first drive of the second half.

Now, the Eagles are 2-3, facing a New York Giants team that is 1-4 on a short week. If the Giants lose again, their season, already spiraling downward, may be done. It's similar to the desperate situation the Vikings were faced with last Sunday when they came to Lincoln Financial Field.

But Malcolm Jenkins doesn’t care about that. His main concerned is an Eagles’ team that is leaking already past the quarter mark of the season, though a team that could get right fast with a win on national TV over the sinking Giants on Thursday.

To burrow from some boxing parlance, a wounded man is a dangerous man, and the wounded team against the ropes is the Giants.

“The Giants have talent. They have a talented quarterback in Eli Manning, they have a great receiver in Odell Beckham Jr. and Sterling Shepard in the slot. They have a dynamic running back in Saquon Barkley, and they’re finding interesting ways to get him the ball. They have weapons on offense, a young, talented tight end [Evan Engram]. They have guys all over the field that can make plays, so there will be some matchup issues. Plus, Eli always tries to get the ball out of his hands real quick.

“We have to have a similar game plan as this last week. We have find a way to create a rush and make them hold on to the ball, and we still have to find a way to stop the run. So I think the biggest thing will be the turnover margin. We have to get that situated and give ourselves a chance to win the game.”

Defensively, the Eagles are still firm against the run, ranked second in the NFL, giving up 66.4 yards a game, behind the Chicago Bears (64.0/per game).

The ominous cloud that’s plagued the Eagles through their first five games this season has been turnovers. Eagles lead the NFL with 13 fumbles, and also lead the NFL entering Week 6 with 7 lost fumbles. Philadelphia is 28th overall in the important takeaway/giveaway ratio, with a minus-4, tied with the 2-2 Tampa Bay Buccaneers, who beat the Eagles in Week 2, and the 1-4 Oakland Raiders.

Last season, the Eagles lost a total of 11 fumbles and were intercepted nine times throughout the season. But they also caused 31 turnovers, making them a plus-11 in the takeaway/giveaway margin in 2017. This season, they’ve caused five turnovers (3 interceptions, 2 fumble recoveries) and turned the ball over nine times (2 interceptions, 7 fumbles). After five games in 2017, the Eagles lost 3 fumbles and were a plus-2 in takeaway/giveaways.

“We have an opportunity on a short week to get that fixed. We’re within the division on the road, so we don’t have time to sit around and lick our wounds. We have to get back to work. We have to keep the focus on us.

“We have a chance to change this around—and fast.”