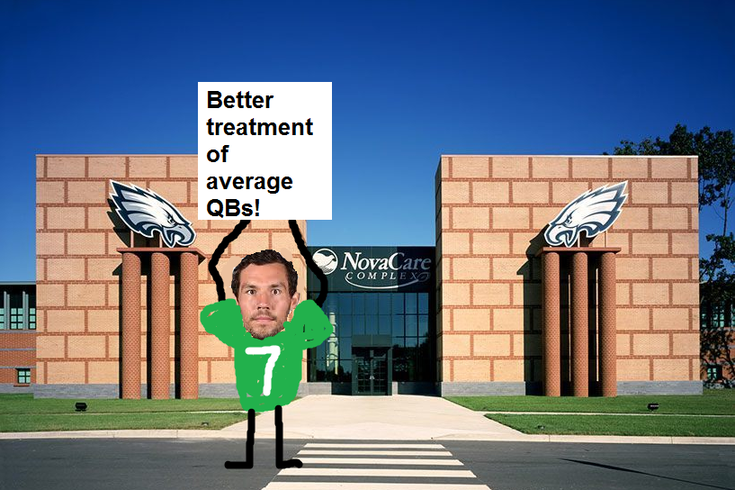 On Monday, a report emerged that Sam Bradford wanted to be traded and would not be showing up for any more offseason programs. His stance was in response to the Eagles trading up to the No. 2-overall pick, where they are going to select a quarterback.

Later in the day, Tom Condon, the agent for Sam Bradford, appeared on SiriusXM radio and talked for four-plus minutes about the situation. The audio is here:

Let's dissect his statement in its entirety, point by point. (h/t BGN on the transcription)

He was obviously very talented at the college level, which was a long time ago.

Condon: "He was the first pick in the draft, and his Pro Day was the finest I've ever seen in terms of accuracy."

He was the first pick in the draft six years and three days ago. He has a grand total of 25 wins in the NFL, or just over four per season. Jamarcus Russell was the No. 1 overall pick once upon a time as well. At what point does draft position become irrelevant when we've had six years to determine what a player really is in the NFL?

Condon: "He's a serious guy and he takes all of this very seriously. He's very competitive, he's very bright. He works really hard, and he's a good, honest tough guy."

He may be serious, bright, and a hard worker, but he sure as hell isn't competitive if he's asking to be traded rather than compete with a Division I-AA kid from North Dakota State.

Condon: "He was excited about signing back with Philadelphia and the contract was, I think, pretty good for him."

Well, sure, Tom Condon negotiated Bradford's contract. Of course he thinks it's good. Somehow, he didn't foresee the Eagles seeking out a long-term solution at quarterback after he essentially agreed to a one-year deal.

Condon: "And then Chase [Daniel] came on, and they paid him a substantial amount of money to be on the roster as well."

Condon: "And I don’t think that anybody foresaw the [trade up to] second pick in the [NFL] Draft which we anticipate, obviously, to be a quarterback."

How can a mega-agent not foresee that when any minimally savvy fan could see it as a possibility clear as day?

Condon: "So I think from that situation Sam’s only been in the league for six years, and he wants to go some place and be there and know he’s going to stay as long as he plays well."

ONLY six years? Only 10 players on the Eagles' roster have been in the league longer.

Condon: "His situation now in Philadelphia is different. It’s one of those things where I completely understand from where Howie [Roseman’s] standpoint and the Philadelphia Eagles, they signed Sam and they had no idea they were going to come up and get the second pick in the draft and to have that be a quarterback. Even being able to sign Chase, certainly not sure of that when they signed Sam."

Yeah, I think the Eagles had an idea of what they wanted to do, and any competent agent signing their client to essentially a one-year deal should have easily recognized that as well.

Condon: "But nevertheless, none of this is personal, it’s just business."

And if the Eagles don't trade Bradford, Howie will be swimming with the fishes.

Condon: "And so from our perspective it is that Sam wants the opportunity to try to go some place and not only be the starter but be the starter there long-term. There’s a couple of things that go along with this. If you’re on a two year contract and the second pick in the draft is behind you, then you better really play well because you’re going to hear it from the fans if you don’t. You better play well or your teammates are going to look at you sideways and wonder about when the next guy is going to step in."

You mean NFL fans expect their quarterback to play well, and if he doesn't, they get upset? Tell me more, Tom.

A list of quarterbacks who have been backups to Bradford over the course of his career: A.J. Feeley, Kellen Clemens, Tom Brandstater, Brady Quinn, Austin Davis, Shaun Hill, Mark Sanchez, and Thad Lewis. Your teammates, as well as the fan base certainly aren't going to wonder when it's "Brandstater time" if you falter.

Bradford has benefited from a lack of quality competition at his position for the entirety of his six years in the NFL. At the first sign of legitimate adversity in that regard, he's wants to be traded to a team where he won't be pushed.

Condon: "I think from that standpoint too it’s that the other players understand you’re a short-term guy. And you’re going to be out of there even if you play well because you can hopefully be traded or something like that before you contract expires. Sam would like to forego all of that."

This is the only semi-reasonable point Condon made throughout his interview. It should have been the only thing he said.

Condon: "From this standpoint the ideal situation is that, he understands he’s under contract [with Philadelphia] for two years, but the offseason program is voluntary and he can certainly make his wishes known with regard to wanting to go some place else and set up and be there for the rest of his career."

Bradford signed his contract 55 days ago, and was already paid $5.5 million dollars. That money is already in his bank account. Where can I be bad at my job for six years, get paid, and then say, "Nah, I'm just gonna sit this out."

Condon: Sam’s a competitor and he wants to go some place that he’s the man.

Clearly, Sam Bradford is anything but a competitor, and no matter where he goes, he will never be "the man."

Condon: "He just doesn’t want to be there holding a place card and then wondering where he’s going to go at the end of the year. He’d like to go some place where he can participate and play."

He'd like to go some place where he isn't challenged.

Condon: "Last year, he was coming off of the ACL two years in a row, he got through the 14 games and his stats over those 14 games put him in about the middle of the starters."

The middle of the starters? Really? Here is where Bradford's numbers ranked last season:

And the only reason Bradford's completion percentage was a little above average was because the vast majority of his completions were short throws. On the whole last season, Sam Bradford was very clearly a below average quarterback.

Condon: "If you look at the second half of those 14 games, in the last seven, he was in the top eight or so."

Condon: "And as he got closer to the finish, in his last three games his statistics were really pretty very remarkable."

If by "remarkable," you mean that he put up inflated stats in garbage time blowout losses to the Cardinals and Redskins, followed by a meaningless Week 17 game against the third-worst defense in NFL history, then sure, they were "remarkable."

Condon: "He doesn’t view himself as somebody who is a stop-gap kind of quarterback and he wants to go some place and take a chance on being with a team for a long time and I can’t blame him for that."

Then maybe you shouldn't have signed him to essentially a one-year deal before free agency even began.