Attorneys Bruce Castor and Michael van der Veen both defended the former president during his trial in the U.S. Senate 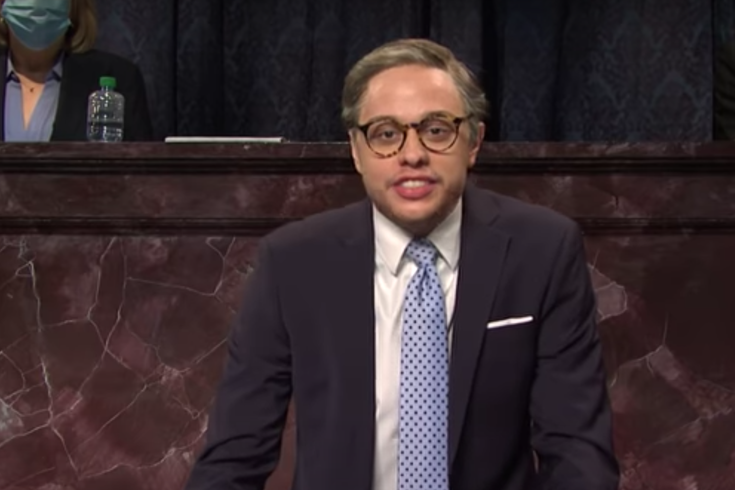 Former President Donald Trump was acquitted in his impeachment trial by the U.S. Senate, but "Saturday Night Live" poked fun at the two Philly-area attorneys who served on his legal defense team.

"Hello Senate and other serious people," Day said. "I want to apologize for being unprepared last time I was out here. Wife bought decaf. But I promise I'll make it up to you now."

Day taken jokingly mistook himself for being the lead prosecutor, as well as Trump's bailiff and bridesmaid, instead of his actual role as counsel.

"I know the difference," Day said.

Mocking Castor, Day also praised the House impeachment managers, who served as the prosecutors during the trial.

"First off, lemme say that I do not want to be here," Davidson said. "I'm not like you, okay. I'm not from Washington. I'm a Philly boy, and I said that over and over."

Except, Davidson's pronunciation of "Washington" and "over and over" were not normal. Instead, the comedian used a thick Philly accent when enunciating both phrases.

"Now the House wants to bring up witnesses over Zoom," Davidson continued. "Zoom?! I can't afford to Zoom! You think I'm getting paid for this?! And this was supposed to be on my last day. I already bought a nonrefundable train ticket back home to PhillyvaniaPennsyldelphia."

Actress and director Regina King hosted SNL this weekend, while artist Nathaniel Rateliff was the musical guest. Complete episodes of "Saturday Night Live" can be watched on YouTube or on Peacock, NBCUniversal's streaming service.

Castor and van der Veen were both selected by Trump to defend the former president during his Senate impeachment trial.

Castor's 45-minute-long remarks during the first day of Trump's impeachment trial drew criticism from Republican senators for being incoherent and lacking direction. The former president was also irate at Castor's performance and lack of preparation, according to the New York Times.

I challenge you to make sense of what Bruce Castor is trying to say here. This is like the worst college lecture of all time. pic.twitter.com/x7rHNjYByT

Van der Veen was the recipient of laughs from senators as he mispronounced Philadelphia as "Phillydelphia" when he demanded that all possible depositions take place at his Center City office.

The 59-year-old Castor served as Montgomery County's district attorney from 2000-2008. He is best known for refusing to press charges against disgraced comedian Bill Cosby in 2005. The Abington native also served as a Montgomery County commissioner from 2008-2016.

Castor, a Republican, became Pennsylvania's first solicitor general in March 2016 and served in the position until September 2016. Castor briefly served as the state's acting attorney general in August 2016, when Kathleen Kane resigned.

Van der Veen owns and operates a law firm in Center City Philadelphia. He is a resident of West Whiteland Township, Chester County.