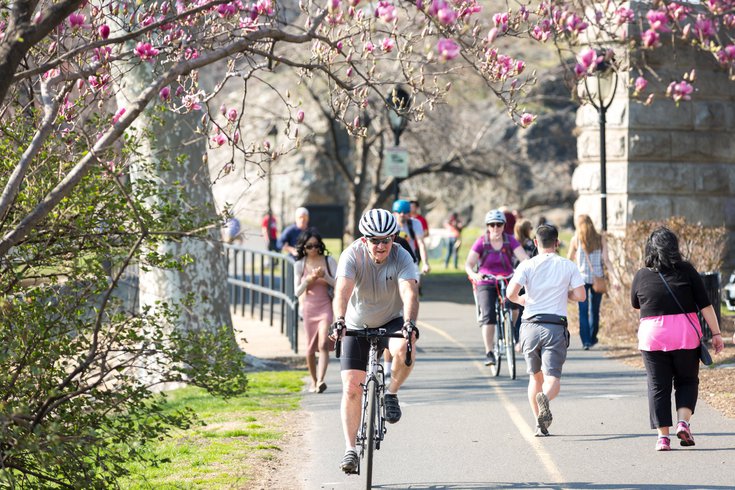 A portion of the Schuylkill River Trail was closed and detoured in February when construction began to repair the foundation of the Chestnut Street Bridge's retaining wall.

Pedestrians and cyclists who have been waiting months for a closed-down section of the Schuylkill River Trail in Philadelphia to reopen can finally resume using the recreational path to its fullest extent.

A stretch of the trail from Walnut Street to Market Street in Center City officially reopened to the public on Thursday, PennDOT announced, as residents get ready to enjoy the Fourth of July holiday weekend.

The closed portion of the path was set to reopen by no later than Friday after a section of the retaining wall under the Chestnut Street Bridge was repaved and nearby landscaping was regraded, PennDOT said last week.

This part of the Schuylkill River Trail was closed and detoured in February when construction began to repair the foundation of the Chestnut Street Bridge's retaining wall.

Access to the trail at Chestnut Street was expected to be shut down for up to three months, with the goal of completing all repairs before the path's heaviest usage period during the spring and summer months.

But the reopening of the path was pushed back by a month in May due to construction delays. Subsurface obstructions in the riverbank — which were discovered at the start of the project — were preventing the completion of the structural repairs to the retaining wall that props up the embankment supporting the trail.

In the meantime, trail users have had to follow posted detour routes to path access between South Street and Race Street.

Detours were set up for trail users at the Market Street and Walnut Street access points over the past three months. Access points to the trail have also remained open at South Street, the bridge at Schuylkill River Park, Locust Street, John F. Kennedy Boulevard and Race Street.

Repairing the wall that passes beneath the Chestnut Street Bridge was a joint venture undertaken by PennDOT, Philadelphia's Parks and Recreation department and the Schuylkill River Development Corporation as part of a $103 million project to fix the bridge and eight other nearby structures. The work has been financed entirely by federal and state funds.

Chestnut Street has since been restored to three lanes between 33rd Street and Schuylkill Avenue, and two-way traffic has been restored on Schuylkill Avenue between Market and Walnut streets near 30th Street Station. Lane restrictions have been in place on both roadways since the start of construction in 2017.

Viaduct construction continued this week that forced westbound I-76 at 30th Street or the westbound 1-76 ramp at 30th Street to close alternately during overnight hours. The closures have allowed crews to install overhead electrical conduit and repair the retaining wall between the expressway and the river.