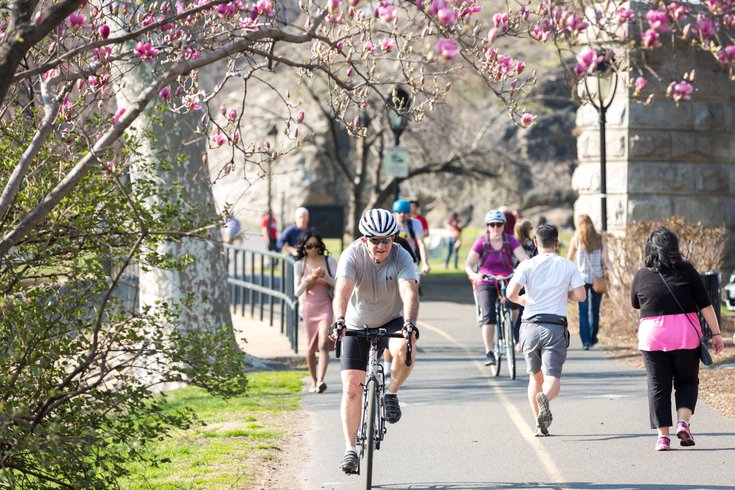 Access to the Schuylkill River Trail at Chestnut Street was expected to be shut down for up to three months, with the goal of completing all repairs before the path's heaviest usage period during the spring and summer.

Pedestrians and cyclists who were hoping for a closed-down section of the Schuylkill River Trail in Philly to reopen in May will have to wait one more month.

A stretch of the popular recreational path from Walnut Street to Market Street will remain shut down until late June due to subsurface obstructions in the river bank that are preventing the completion of planned structural repairs to the foundation of the Chestnut Street Bridge's retaining wall, PennDOT said Friday.

In the meantime, trail users will need to continue following posted detour routes to trail access between South Street and Race Street.

A portion of the Schuylkill River Trail was closed and detoured in February when construction began to repair the retaining wall that supports the embankment supporting the path.

Access to the trail at Chestnut Street was expected to be shut down for up to three months, with the goal of completing all repairs before the path's heaviest usage period during the spring and summer.

Detours have been set up for trail users at the Market Street and Walnut Street access points over the last three months.

Repairing the wall has been undertaken by PennDOT, Philadelphia's Parks and Recreation department and the Schuylkill River Development Corporation as part of a $103 million project to fix the Chestnut Street Bridge and eight other nearby structures. The project has been financed entirely by federal and state funds.

The project has also consisted of replacing the decks of the three adjacent Chestnut Street bridges, two viaducts on Schuylkill Avenue and the Chestnut Street westbound off-ramp and Walnut Street eastbound on-ramp for Interstate 76.