The task force traveled to Florida Wednesday night with buses, trucks and search and rescue equipment 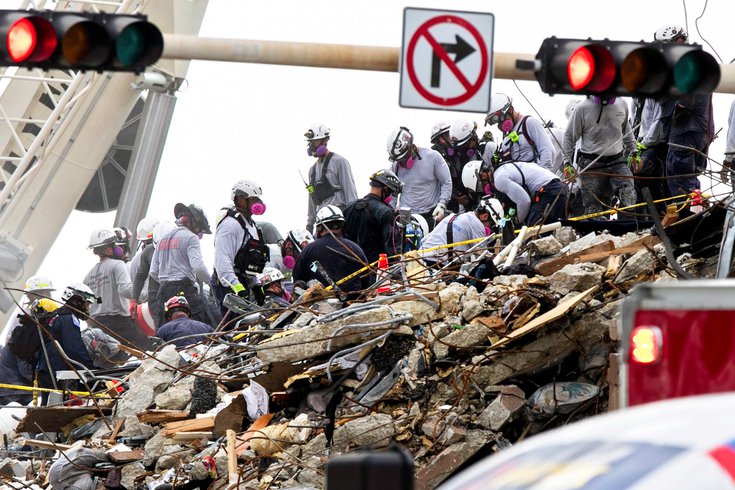 Search and rescue teams dig through the rubble at the base of the Champlain Towers collapse in Surfside, Fla., after the building partially collapsed Thursday, June 24. The Pennsylvania Task Force was deployed to aid in the search and rescue efforts.

Dozens of members of the Pennsylvania Task Force were deployed to Florida on Wednesday to help with search and rescue efforts at the Surfside condominium collapse.

Champlain Towers South, a 12-story condominium building, partially collapsed last Thursday, sending sheets of concrete to the ground in seconds. First responders and search and rescue teams have been working through the rubble looking for survivors for the past week.

City officials said 70 members of the task force, which is one of 28 national urban search-and-rescue teams that are overseen by FEMA, traveled nearly 1,200 miles to Florida with buses and trucks full of resources and equipment.

The team of first responders and Philadelphia-based firefighters is set to stay in Florida for two weeks to assist with the search.

"We can only imagine the pain of those who have lost loved ones or are still waiting to hear about their loved ones," Gov. Tom Wolf said in a statement. "The men and women of PA-TF1 know the dangerous work they will face when they arrive on-site, but the ability to bring closure to families and friends of the victims of this collapse is also a tremendous blessing."

Search crews at the scene of the collapse found the remains of a total of six people on Wednesday alone — the highest one-day death toll since search and rescue efforts began,  the Miami Herald reported.

Officials say 18 people are confirmed to be dead. There are 145 residents still unaccounted for.

This isn't the first time the Pennsylvania task force traveled to Florida for aid. In 2018, the team was deployed to the Florida panhandle for 10 days for assistance after Hurricane Michael.

The task force was also sent to South Carolina for 19 days to provide aid during the Hurricane Florence flooding.