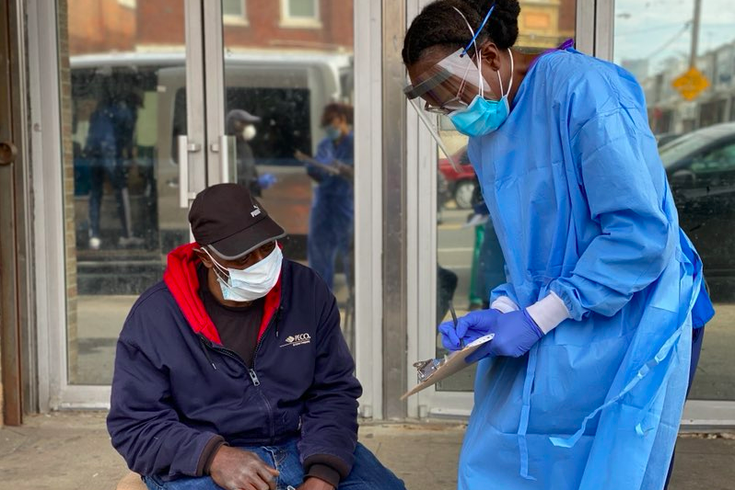 The Black Doctors COVID Consortium will be awarded the annual Magis Award this Fourth of July for its work advocating for Black communities disproportionately impacted by the pandemic and raising vaccination rates.

The Black Doctors COVID-19 Consortium will receive the annual Philadelphia Magis Award this Fourth of July for its work advocating for and vaccinating Black people in the city.

Mayor Jim Kenney said the Consortium was chosen for this award — which is given to a person or organization that does "universal good" in the community — for its work advocating for Black and Brown communities that were disproportionately impacted by the pandemic.

Research shows minorities were contracting and dying of COVID-19 at a higher rate than white people throughout the pandemic.

The Black Doctors COVID-19 Consortium, led by Dr. Ala Stanford, launched a mobile COVID-19 testing unit and vaccination operation in the city that addressed the needs of the community and gained national attention.

By mid-March, the Consortium vaccinated more than 25,000 people and reported 82% of those served were people of color — 75% of which were Black residents — compared to the 25% of vaccinations that were given to Black residents citywide during the same period.

"Dr. Stanford is extremely proud. She’s from Philadelphia, the work that she's done over the past 16 months is but a reflection of her love for this city," Kamau Stanford, chief operating officer of the Consortium, said in an interview with PhillyVoice. "Getting this award is special. Getting recognized by the city that you love so much — it doesn't get much better than that."

The organization will be presented with the award during the Celebration of Freedom Ceremony at Independence Hall. There will be performances by the Philly POPS, R&B artist Saleka and The Voice winner Cam Anthony. Marley Dias will read an abbreviated portion of the Declaration of Independence as well.

"On Independence Day, it will be my honor to present the sixth annual Philadelphia Magis Award to the Black Doctors COVID-19 Consortium for identifying and meeting a critical need to help our residents who needed it the most," Kenney said in a statement.

"Fourth of July is a rather special moment for African Americans. Historically, that has been the day of independence, but this year with Juneteenth being passed, I think that it makes this Fourth of July that much more special," Kamau said.

"[The fact that Dr. Stanford] has been recognized for taking care of the people — specifically minority populations who, on Fourth of July, were not free … It's just, it's pretty special all the way around."

The Celebration of Freedom Ceremony will be broadcast on NBC10 and TeleXitos at 6 p.m. or on nbcphiladelphia.com, followed by the live broadcast of the Wawa Welcome America evening concert at 7 p.m. at the Mann Center for Performing Arts.