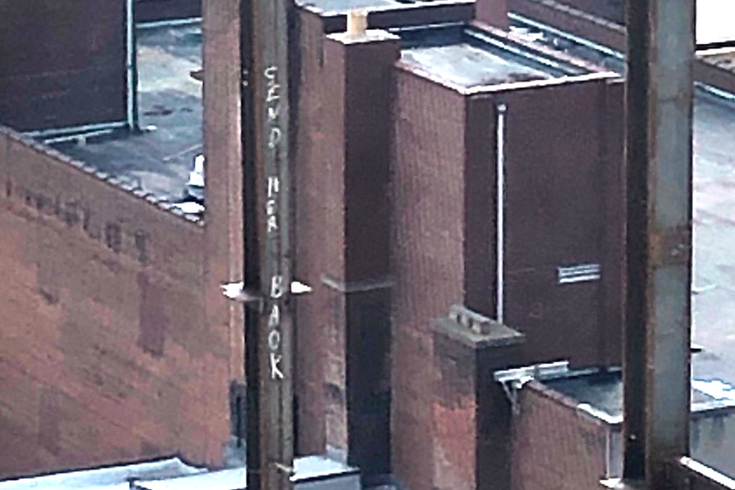 A steel construction beam at 17th and Chancellor streets, the site of the future Hyatt Centric hotel in Center City Philadelphia, contains had been painted with the message 'Send Her Back,' which caught fire and provoked debate after a Donald Trump rally in Greenville, North Carolina in July 2019.

For at least 24 hours, a steel beam visible atop a 13-story hotel construction project in Center City displayed the words "Send Her Back," parroting the political rally cry that emerged earlier this month after President Donald Trump took aim at Minnesota Rep. Ilhan Omar.

The message, which has been called racist and anti-immigrant, was painted vertically at the Hyatt Centric hotel under construction near 17th and Locust streets — the former site of the famous Little Pete's diner — and was spotted by residents and employees in the surrounding buildings.

One woman, who wished to remain anonymous, said she could see the slogan from the south side offices of the Sun Oil building at 1608 Walnut St. She snapped a picture on Monday and said the graffiti was visible by people in her building on the 12th through 19th floors.

A group of workers at the site on Tuesday said they were unaware of the message on 12th floor beam. The project is being managed by Center City-based Becker & Frondorf. General contracting has been led by Clemens Construction.

A construction site foreman told PhillyVoice the project is slated to have a topping-off ceremony later this week. Access to the area where the graffiti was written would have been restricted to workers at the site, which includes subcontracted work.

While this story was being investigated and written Tuesday afternoon, the "Send Her Back" graffiti was painted over, the anonymous eyewitness told PhillyVoice.

A representative for Becker & Frondorf had said the company was aware of the graffiti and was addressing it with Clemens Construction. Philadelphia police had no documented reports or calls about the graffiti as of Tuesday afternoon, but added that they intend to look into it.

Officials from Hyatt did not immediately return a request for comment.

"Send Her Back" is a derivative of a tweet by President Trump directed at Omar and three other Democratic congresswomen who have been vocal critics of his policies at the U.S.-Mexico border. Trump had written that Omar (a naturalized American born in Somalia) and the other politicians (all born in the United States) should "go back and help fix the totally broken and crime infested places from which they came."

Shortly after, at a Trump rally in North Carolina, members of the audience began chanting "Send Her Back."

The chant has drawn outrage from Trump's political opponents, who increasingly feel the president is campaigning on an openly racist, divisive platform.

Omar, who has defended herself from Trump's attacks, told reporters in Washington that she believes Trump is debasing political dialogue in the United States.

Just asked Omar about the chants, and she says of Trump: "I believe he is a fascist." Responding to Lindsey Graham, who said if she were wearing a MAGA hat Trump wouldn't have said 'go back:' "Because I criticized the president, I should be deported?" pic.twitter.com/Pdgtozu6x6

Local incidents from around the country in recent weeks have shown signs of growing political hostility toward immigrants, including a woman in Montgomery County who was caught on camera telling a Hispanic woman, "I hope Trump deports you."

The "Send Her Back" graffiti at the Center City project comes as the nation prepares for two nights of Democratic presidential debates, which thus far have wavered between discussing policy proposals and attempting to invalidate the politics of the Trump administration.