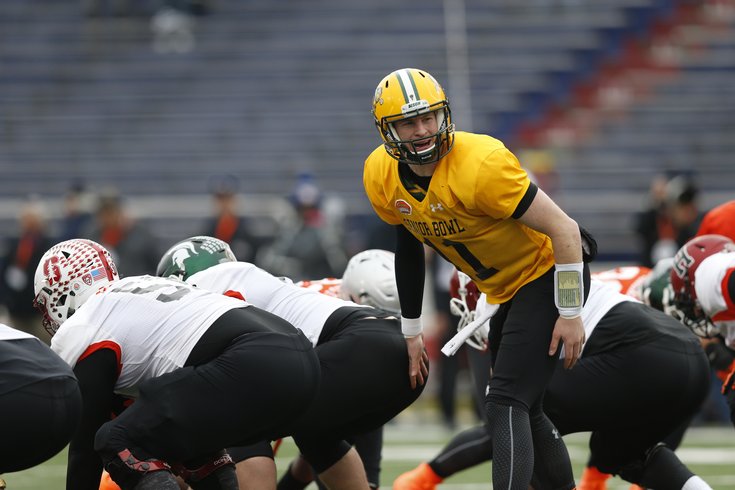 Carson Wentz is the best prospect at the Senior Bowl.

MOBILE, Ala. – In past Senior Bowls, there always seemed to be one player who clearly stood out above the rest during the week of practices. For example, it was clear a couple years ago that Aaron Donald was unblockable. In 2013, Lane Johnson was dominant, and he vaulted up draft boards. This year, no player has emerged as "that guy," although a lot of players have had a couple good days of practices. Here's what we saw Day 2.

• As we noted yesterday, North Dakota State's Carson Wentz is by far the best quarterback here. If there's a word I would use for his play so far, I'd go with "effortless." There haven't been many "wow moments" from Wentz, but the ball just always seems to get there on target, and quickly. You can see a noticeable difference in arm strength between Wentz and the other North team quarterbacks, particularly Cody Kessler of USC. You'll see Wentz drill one in to a receiver, and then on the next rep, you're almost willing the ball to get there faster from Kessler. It's reminiscent of watching Matt Barkley following Michael Vick in training camp reps, although maybe not to that extreme.

• We mentioned him yesterday, but it's worth noting again how good Louisiana Tech running back Kenneth Dixon is running routes out of the backfield. Get him matched up on a linebacker, and he is uncoverable. The only guy I've seen not get completely embarrassed by Dixon in coverage has been Wisconsin LB Joe Schobert, who may have held him.

• The three receivers who have impressed so far are Oklahoma's Sterling Shepard, Baylor's Jay Lee, and Rutgers' Leonte Carroo.

Shepard has gotten open for deep completions several times and has shown shiftiness in the open field. Lee was probably Baylor's third-best receiver this season, but at 6'2 has a big body (at least compared to the other shrimpy receivers here), and has made a ton of catches. Carroo, meanwhile, has shown good speed.

In one-on-one drills, Minnesota CB Eric Murray was mugging Carroo, which prompted the coaching staff to correct Murray, because he was essentially ruining receivers' reps by committing penalties every time. Once he stopped blatantly holding, Carroo smoked him down the sideline by five yards on a deep ball for a TD.

One receiver who has really struggled catching the football has been Michigan State's Aaron Burbridge.

• One of the offensive tackles we mentioned as potential Eagles targets was Jason Spriggs of Indiana. Spriggs is known for his athleticism, but has had a very good week of practices without even getting to show off his ability to get out in space and make athletic blocks.

Another player who makes a ton of sense for the Eagles is Cody Whitehair of Kansas State, who is likely to be the first guard to come off the board in this draft. He could start at LG from Day 1 and be an immediate upgrade on an Eagles offensive line that sorely needs help. But a guard at 13th overall? Yuck. Maybe as a trade-back option.

One offensive lineman who has struggled is Spencer Drango of Baylor. Drango played LT all four years at Baylor, but he is going to struggle with speed rushers at the next level. Virginia Tech's Dadi Nicolas and Eastern Kentucky's Noah Spence both beat Drango around the edge. Drango is in a tough spot. Teams will likely view him as a guard in the NFL, and at the same time, he'll be a projection there because he didn't play guard at Baylor.

• Lawrence Thomas of Michigan State has wholly unimpressive stats (6 career sacks), but he has stood out a few times in pass rush drills. Adolphus Washington of Ohio State has also had a good week of practices, showing good quickness and being disruptive in the backfield. Both players could be of interest as penetrating one-gap defenders in Jim Schwartz's scheme.

• Alabama LB Reggie Ragland is fun to watch. In one-on-one blcking drills, Ragland ran over some poor running back like a Mack truck. On Day 1, he chased down a wide receiver 40 yards down the field. Here comes an old Andy Reid phrase -- Great motor.

• LSU CB/S Jalen Mills had two impressive pass breakups in which he essentially ran the route for the receiver he was covering. He actually should have had a pick, but he could not finish the play. Still, it was impressive coverage nevertheless. Mills is a player who would have absolutely been on the Eagles' radar under Chip Kelly, due to the versatility he brings from the safety position to drop down and cover slot receivers man-to-man. With his blend of size and athleticism, Mills can also play corner on the outside. To be determined what the new regime will value in their defensive backs.