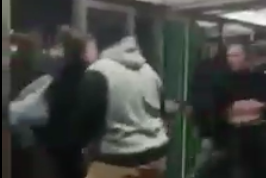 A video of a brawl reportedly involving local school students is circulating on social media.

Cellphone video footage shows about a dozen teens involved in the violent scene, with at least one boy shown lying on the ground and being kicked by several others.

RELATED: SEPTA proposes fare increases across the board, effective in July

In another snapshot, viewers can see students engaged in hand-to-hand combat while others use their phones to video the fight.

Both girls and boys appear in the video dressed in school uniforms and wearing backpacks.

A SEPTA spokesperson said at least one student involved in the altercation was taken to a nearby hospital and treated for not life-threatening injuries.

There have not been any arrests, at this time.