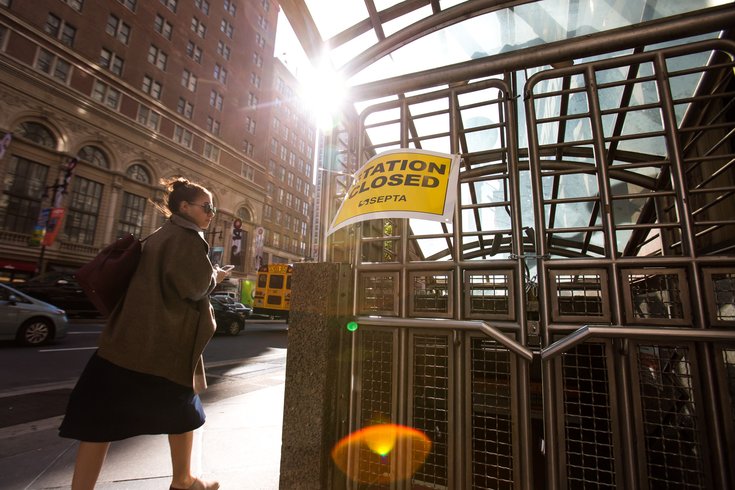 A 'Station Closed' sign, posted on the locked entrance to the Broad Street Subway station at Walnut Street, was a common sight in Center City on Tuesday, Nov. 1, 2016, due to a strike by SEPTA workers.

The ongoing SEPTA workers strike has produced headaches for commuters. Many have been forced to use bicycles, taxis and ridesharing services and — if the trek is reasonable — their own feet.

Walking is how Philadelphia resident Tom Stanley is beating his #septastrike blues. He added some music to his stroll in this whimsical music video posted Tuesday to Facebook to the tune of the Bee Gee's "Stayin' Alive" (h/t BillyPenn):

Stanley wasn't the only one to get funky during the strike. West Philly rapper Damian "Dame Dollur" Hewitt published a song and subsequent music video about the strike using the backing track to Ja Rule's "Livin It Up."

Here's an excerpt of the song, via Philly.com's Sofya Ballin:

And the trolley aint broken

You betta sell ya transpass and ya token

Cuz every station in the city aint open

They tryna get that fat raise and promotion

Hewitt told Ballin he made the song in about 15 minutes on Garageband and freestyled the lyrics.

If those localized renditions aren't enough, here are a few more transportation-related tracks to get you through the strike:

• "Walken" by Wilco (For those stuck walking to work)