The former linebacker's exit comes after the retirement of Ray Didinger, leaving two openings on the show 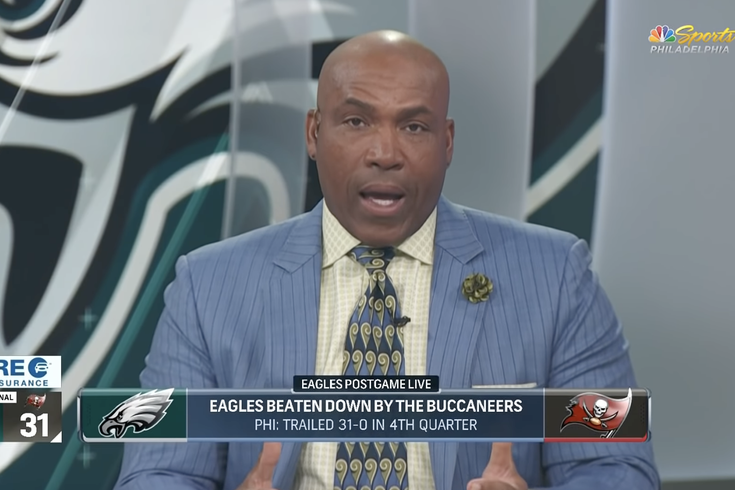 Both Seth Joyner and Ray Didinger will not return to NBC Sports Philadelphia for Eagles pregame and postgame coverage during the 2022-23 NFL season.

Eagles pregame and postgame analysis will have a very different look on NBC Sports Philadelphia for the upcoming NFL season, as Seth Joyner announced Monday he'll be leaving the network.

Joyner, the former All-Pro linebacker for the Eagles, talked about his decision to leave during his own podcast. His departure follows the retirement of Ray Didinger last month, meaning half the crew on "Eagles Postgame Live" will be new come September.

"Sometimes things run their course, and it's time, you know?" Joyner said. "My man, Ray Diddy, called it a career and it's hard to replicate and duplicate the kind of chemistry and camaraderie that we had."

Joyner has been a brutally honest and sometimes harsh critic on the show, voicing fans' frustrations with earned credibility and a deep knowledge of the game. He's right when he says that his chemistry with Didinger was a major draw. It would have been difficult to recreate even if Joyner chose to stay. Instead, Joyner is taking on a new role that has yet to be announced.

"Don't worry. Information will flow in the next couple of weeks," Joyner said. "It's not like you're not going to be able to hear my commentary. Another situation arose and created an opportunity for me to do something different."

For the moment, the network has Michael Barkann and Barrett Brooks slated to handle pre- and post-game duties, with some huge shoes to fill.

Even going back to former Gov. Ed Rendell's time on "Eagles Postgame Live," Didinger was always the fulcrum of the show. You'd see the gears turning in his head as he listened to his colleagues and scanned his notes. Then the deep breath. And finally, he'd dissect the team's performance (and the opponent's) as only he can. Joyner's authority brought extra punch to the show, since it's nice to have a former player and a non-player with a great football mind there to balance each other's strengths.

The good news for NBC Sports Philadelphia is that the Eagles' rising outlook this season should help make these openings especially attractive. Another former Eagle and a respected analyst would do the trick. The answers are anybody's guess, for the time being.

Trent Cole lives in South Jersey and has had five years away from the game. He might need to be convinced to take a break from grain farming on Sundays.