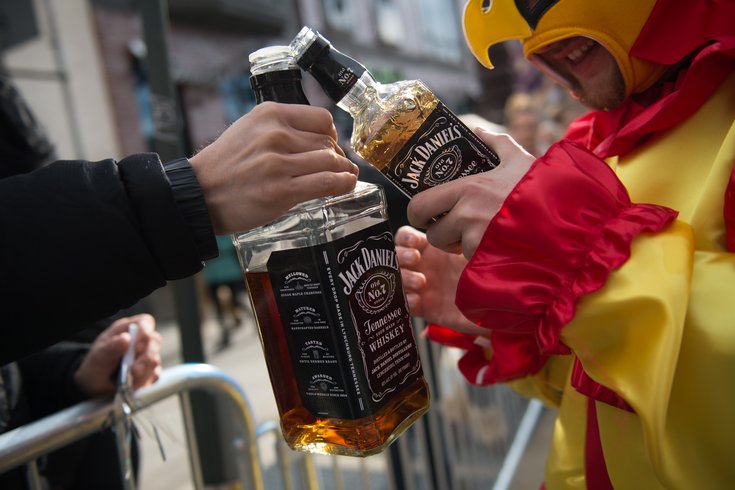 A mummer toasts a spectator along the parade route on Broad Street during the 2016 Mummers Parade.

A new year has officially started in Philadelphia which can only mean one thing: Philadelphians are again grappling with the international embarrassment that the Mummers Parade has let itself become.

This year’s parade offered the unique wrinkles of an in-parade Mummer (now a former Mummer) sharing his profane anti-gay sentiments with the cameras, an alleged assault (complete with hate speech!), a Caitlyn Jenner “parody” skit and children in “brownface" as opposed to the blackface festooning of old.

What also made this year’s parade unique is this: It came three days before a former* Mummer will be sworn in as the 99th mayor of the city of Philadelphia. Let this column serve as a clarion call: Jim Kenney needs to step up and force-feed a heaping helping of change onto a divisive “tradition.”

Knee-jerk defenders of all things Mummery – as they are wont to do – will trot/have trotted out the diversifying “Philadelphia Division” which drew new troupes into the fold as a means to bring the parade’s public image more in line with its city’s population.

That is a real thing that happened. Sure, it happened early enough on New Year’s morning when the stands near City Hall were, for the most part, still vacant, but it happened nonetheless, and that is a good thing.

It’s all those things that happened next which Kenney, in his soon-to-be-assumed role as Executive in Chief of a city that supports said event, needs to address, even if he couches it as an effort to save the Mummers Parade from itself for more palatability amongst the Two Streeters with whom he grew up.

Granted, I’ve never dug the Mummers. Hell, I’ve never even understood the Mummers, and I grew up within eyeshot of the PSFS sign. Yet, I still get the attraction of the string-band and fancy-brigade divisions. It’s in the “performances” of the “wenches” and “comics” where the problems lie.

With seemingly less signage oversight than accompanied the ESPN College GameDay festival on Independence Mall before Temple played Notre Dame, these performers bounce out into the performance area and form human puppy piles.

They bounce around, scream through half-assed face paint and hoist five-and-dime umbrellas into the air. This year – like last – they embraced their silly #WenchLivesMatter and #MummersLivesMatter shtick in a not-so-subtle nod to a Black Lives Matter effort that saw its protest this year result in a couple arrests.

When called out on what some deem disrespectful, they hide behind shields of Comedy and Parody, mistakenly claiming that even a modicum of intelligence went into crafting their messaging. If people sensed B-level brainwork behind the humor, it’d be a lot easier for non-Mummers to stomach.

Alas, likening a transgender woman’s life changes to a box of Fruit Loops is nowhere near “A Modest Proposal” level of satire. No sirree, bub! It’s middle-school playground name-calling. And Kenney – who has positioned himself as a champion of fairness – called it out as such.

That Tweet came in response to someone asking for his reaction as the story was just starting to take hold.

It’s elicited both nods of approval and cries that Kenney should worry about more important things like schools and crime and jobs (ironically, the same issues that the BLM protesters hoisted some signs about on Friday.)

And, it wasn’t enough.

Despite what the knee-jerk sequined-and-feathered sentries would have you believe – and oh, they will try to do just that through huffing and puffing and typing in all-caps – calling out hateful public messaging is not political correctness run amok. It’s common decency.

It’s also common decency to publicly acknowledge that the bad seeds do not represent the Mummers in their totality.

That’s why it’s going too far to call upon the city – and the parade’s corporate sponsors including that big casino down by the river – to withhold all support of an event which brings happiness to a whole lot of people.

But, Kenney must call upon good Mummers to self-police the comics and the wenches. (And, who knows, maybe he’s already done so without calling an attaboy press conference.)

When you’re watching those portions of the parade on television, it resembles a live look-in at a large group of kids who took a class trip sans chaperones.

It’s not a First Amendment violation, or censorship, to check in with group captains in advance to ensure people commenting upon, say, Caitlyn Jenner are driven by legitimate social commentary instead of juvenile name-calling.

They could call it the “Making sure comics are employing comedy” effort. Andrew Dice Clay’s “Dirty Nursery Rhymes” had a seed of intelligence behind them, which is why they – to some, including myself – worked.

As things currently stand, these skits shouldn’t be aired on television because when they are, you get commentators afraid to acknowledge the ignorance they’re putting in the faces of families watching a local tradition on TV.

So, Mr. New Mayor, I’m calling on you to do what Twitter social-justice warriors – again, myself sometimes included – cannot: Have an adult conversation with Mummery’s troublemaking contingent.

Tell them that their idiocy drags down the reputations of upstanding peers who put a lot of time and work into their performances.

Tell them, while dangling city support over their heads, that they need to self-police or else the city can no longer be a willing party to ignorance.

Tell them that they’ve seemingly forgotten that the Mummers Parade is supposed to be about more than mocking already vulnerable citizens and pissing in alleys.

Then, tell them that their antics leave you embarrassed to be called a Mummer – as many hope you are.

Tell them these things without a moment’s care about the “Frog You Kenney” signs that the Froggy Carr puppy pile will prance about for the next four or eight years. Because if you don’t, your call for a more diverse-and-inclusive Philadelphia will be written off as lip service before New Year’s Day 2017.

Oh yeah, congratulations on today's swearing-in, Mayor Jimmy. We hope you’ll be a great one.

(*Column updated to reflect the fact that Kenney was formerly a Mummer, not a current-day marcher.)