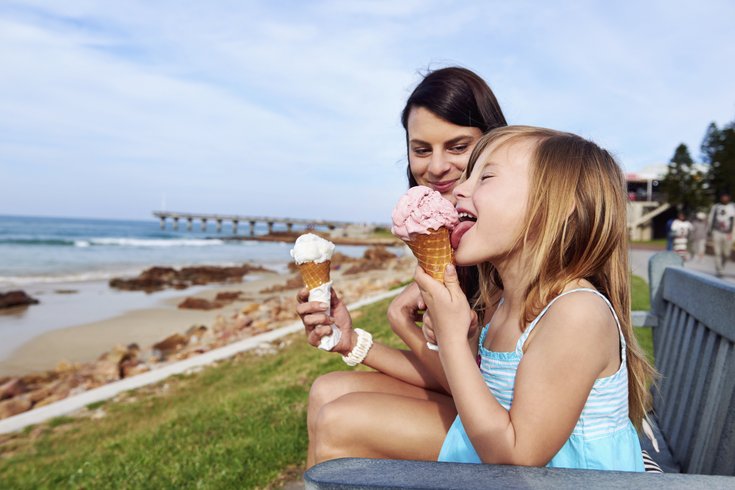 After a day at the beach, nothing tastes better than a cool dish of hand-dipped ice cream or a soft-serve cone. Here are seven hot spots down the shore for ice cream treats:

Your ice cream comes topped with a dollop of '50s nostalgia at this spot celebrating Wildwood's Doo Wop era. You can enjoy super-sized treats like a “Scoop DeVille” –– a guzzler of a sundae consisting of six scoops of ice cream, five toppings and whipped cream –– in a booth tricked out like a late-'50s-era Cadillac, Chevrolet Bel Air or Ford Fairlane. Or perhaps you would rather make like the (skinny) King and get the “Elvis Pretzelly,” a medium dip of ice cream in a pretzel cone.

For a hand-scooped cone on the Ocean City boardwalk, there's nothing fresher than the house-made ice cream at this traditional sweets shop dating to 1954. More than 40 flavors are served, including hard-to-find traditional favorites like butter brickle, as well as more exotic combos, like “Muddy Sneakers,” a mix of chocolate, peanut butter and caramel. You might also want to pair your ice cream with a “chaser” of one of George's signature coconut macaroons.

For me, there's standard frozen custard and then there's Kohr's –– and nothing but the latter will really satisfy. What sets Kohr's apart is the creaminess of its recipe, which claims to be the original from 1919, and the variety of flavors. Kohr's features standard vanilla and chocolate alongside strawberry, orange, mint and peanut butter, which can be combined for an original twist. The Ocean City boardwalk locations in this chain are my favorite, but you can't go wrong at any Kohr's.

Don't want to have to decide between hand-dipped and soft-serve in advance? This popular spot in Sea Isle gives you the best of both worlds –– more than 40 flavors of hand-dipped ice cream, including s'mores, peanut butter cup and white chocolate mousse, as well as soft-serve cones that can be coated with hot fudge or peanut butter toppings. Be prepared for long lines during the height of the season, and try to walk if you can, because parking is at a premium, particularly at night.

Established in 1898, this candy shop defines old school with its traditional architecture and Rube Goldberg-style contraption cranking out salt water taffy, yet somehow also manages to produce authentic-tasting gelato. The more than two dozen flavors span ones you would readily find in Italy, like Frutti di Bosco (mixed berry) and stracciatella (chocolate chip) to ones geared toward the domestic palate, such as creamsicle and cookie dough.

This longtime favorite will leave you torn between hand-dipped ice cream and soft-serve. The more than two dozen hand-dipped flavors include death by chocolate, salted caramel and cotton candy and can be topped with hot fudge, sprinkles and more than a dozen other toppings. Meanwhile, using vanilla or chocolate soft-serve as your base, you can create your own flavors by adding your choice of some three-dozen flavors. How does rum-pina colada combo sound or maybe English toffee with butterscotch?

The line snaking out the door of this storefront along Stone Harbor's main drag is the first clue that you're onto something delicious. As befitting this button-down resort, most of the 50 flavors made by Springer's skew toward traditional favorites, like black cherry, butter pecan and French vanilla. More unusual choices include “Cease & Desist” (coffee heath bar crunch), “Emotionally Nuts” (think Almond Joy in ice cream form) and “The Blue One” (blue-colored vanilla ice cream with cookie dough and Oreos). You can also opt for an old-fashioned ice cream sundae, banana split, milk shake or ice cream soda.