NJ singer-songwriter talks being a mom & an artist in 'Estuary' 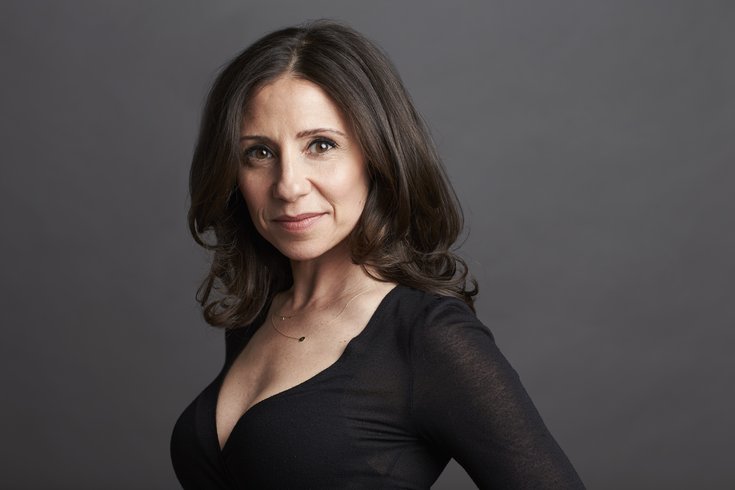 Jamie Leonhart, whose "Estuary" cabaret-like show premieres at the Kimmel Center on Feb. 4.

In her new one-woman show, "Estuary: An Artist/Mother Story," New Jersey native Jamie Leonhart sings her way through the failures, joys and all the in-betweens of being equal parts mom and artist.

"Focus on neither, and lose connection to both."

Singer-songwriter Leonhart wrote the approximately 70-minute "musical exploration," which features elements of musical theater and cabaret, as a response to the overwhelming feelings that came with trying to balance motherhood and work after having her son, Milo. The show was developed during a Kimmel Center theater residency and commissioned by Joe's Pub in New York; its content includes monologs, sweepingly emotional melodies, a special duet and jazz-influenced instrumentals from Saskia Lane and Pauline Kim.

Here, Leonhart chats about the process of writing the show, the response from audiences and inspiring other parents to feel empowered.

How did having a child change life for you?

It changed a lot for me. Where to start? I think that life – everything got turned upside down in a way, for me, and physically I was and felt different. I performed up until I was eight months pregnant, so it’s kind of like it was late – it didn’t shift anything for me. If anything, I felt super-powered. I felt really awesome. But once we had our son, for me, I tried very unsuccessfully to just keep a status quo. I’ll take a few months off and then start to perform again, but I felt so different. Physically I felt different; emotionally I felt different; I was distracted; I couldn’t write the way I did before, I was really, really tired all the time. And I kept thinking about what a commitment a child – I got it, intellectually, but didn’t really understand how the commitment to a child, if you’re truly committing to having your child, takes away from other things you had committed to.

"People come up and say ‘OMG you have a baby you must be so happy!’ And it’s like, ‘OK, you just decided that for me, and if I say ‘No, I’m not,’ then I’m blowing your opinion out of the water.’"

What made you want to write this show?

After I had my son, I was trying to write and perform and was continuing to do it but really not enjoying the performances and thinking, ‘Well what was that for? How was that? Was it worth it? Did anybody get anything out of it? Did I? Am I upholding my artistic self?’

And then I was having trouble writing – I was having writer’s block. Nothing came out. Nothing I want to put forward. And so I started to diminish the amount I was performing my own material and was working for other people to keep singing, and I decided to take a writing workshop with this woman named Gretchen Cryer, who did this workshop. I don’t know how many weeks it was, but it was four hours a week with 10 people and we all wrote and shared our work and examined different voices in one person’s show. Third-person, past, present -- we’d read others' writing, and I took this class and I really didn’t know what I was going to do, except I wanted to be stimulated to write and I wanted to take the time that I think I started to avoid a little bit. When you have writer's block I think you find ways to avoid sitting down. And so I figured ‘Let me start this way.’

I had said this ridiculous vow to myself ‘I will not write about parenting. I will write about anything else but this is my time as an artist.’ I made all these proclamations. And as you can guess I wrote a lot about parenting, but from a pretty honest, raw perspective. And I think I allowed myself to be in touch with the difficulties and troubles I was having -- judgment I was having. Joy I was experiencing, too, but a lot of it was also just the stuff no one feels OK to talk about. And maybe people are starting to do that now, but you know, people come up and say ‘OMG you have a baby you must be so happy!’ And it’s like, OK, you just decided that for me, and if I say ‘No, I’m not,’ then I’m blowing your opinion out of the water.

And so at the end of the class, I had about 20 minutes of potential material. And I thought ‘OK, what if I really wrote something about the collision I’m experiencing right now?’ So that was the nascence of the project and then it took another two years to keep writing it ...

The show also has humor. How would you describe it?

Well, I think in really putting the ridiculous out to be seen and all the judgments we have and stress we put ourselves through – I want to say that even though it’s called ‘Estuary,' it’s also about facing failure and you don’t have to be a mother or be pregnant to relate to a struggle. But there’s humor in there. There’s one piece that's a duet between myself and a real Type A mother,and she has her child’s college plans already and he can’t even walk yet. It’s like this list of all the amazing things her child already does and will do …

There’s humor in looking at the reality of it. Kind of the more pathetic it gets, the funnier things can actually be.

Is it nerve-wracking to put all of the ridiculousness and your feelings out there?

And what I want to say is that after I did three shows at Joe’s Pub in November, the amount of women especially who came up to me afterward and told me their own stories and own struggles, and said ‘Oh my god, I feel like I have permission to comment on a story now, instead of just saying things’ ... One woman came up to me, she was in her late 60s, and she said ‘You know, when my husband was younger and our kids were younger, every time we moved, my husband’s life never changed. He would leave the house and go to his office in the same place he always went to, and his wife and kids would be there for him. And I had to meet a whole neighborhood of people and understand the education system my kids were going through.'

So I think that, in some ways, me presenting myself in this way, I’m presenting my own story but it gives people permission to share their own stories or makes them want to. And that’s freeing to me.

Do you think that's the takeaway of this show?

It is. I’m telling my story. I’m not preaching or saying 'This is how you should feel,' but in sharing my story I want people to feel they can share their story. Or start a dialogue about it. Or have confidence, or the wherewithal, to express themselves in a similar way that’s not edited so other people can feel comfortable.

"Estuary: An Artist/Mother Story," will be performed at the Kimmel Center for the Performing Arts from Feb. 4 through Feb. 6.