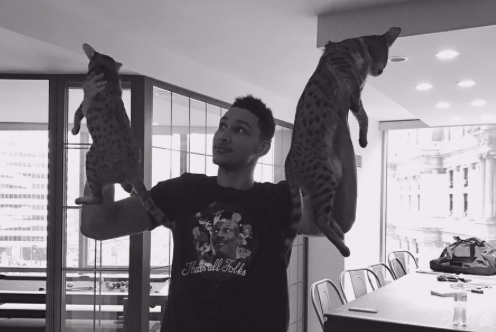 For the first time in what feels like ages, the Philadelphia 76ers are the talk of the town in a positive light. After stringing together an impressive 10-game stretch and showcasing what's in store for the better part of The Process, that alone stands as reason enough to celebrate.

MORE SIXERS NEWS: High hopes: Why current Sixers squad is reminiscent of 2006 Phillies | What they're saying: Embiid might not be an all-star at all | An open letter to fellow Process-trusting Sixers fans: Let everybody in | Sixers beat: What happens next for red-hot Sixers? | Report: Ben Simmons might be back after all-star break

Of course, as only a fanbase that has grown delirious from several seasons of professional losing could do, the Sixers faithful have come up with a truly weird way to praise the team's reemergence. They're hoisting cats in the air after every win and slapping on a #RaisetheCats hashtag.

Why is this happening, the uninitiated might wonder? Well, it has nothing remotely to do with basketball, but Twitter user @GipperGrove launched the hashtag as a way to engage rookie Ben Simmons, who remains sidelined with a foot injury and has otherwise shown up in Instagram and Twitter pictures with several of his feline friends.

The more the 76ers win, the more fans lift up their cats in victory#RaiseTheCat https://t.co/ZIa7faJRus pic.twitter.com/yQNbjHy22c

With Sixers victories now piling up, social media feeds have been littered with fans posting pictures of their cats held skyward.

This @Sixers team is pawsitively exciting. What a W #RaiseTheCat @JoelEmbiid pic.twitter.com/VkS6B2SIxi

#RaiseTheCat she hates when I pick her up and I don’t wanna get scratched so heres her on a couch arm pic.twitter.com/2cPInkpi9H

Eventually, Simmons caught wind of what was going on and began to wonder how it all started.

Someone tell me how raise the cat started

Answers from fans quickly poured into the top draft pick's Twitter replies and Simmons — as had been the goal all along — obliged popular demand with a perfect #RaisetheCats photo.

Naturally, ESPN picked up the story and a ran a segment on what Philadelphians are doing to support their team.