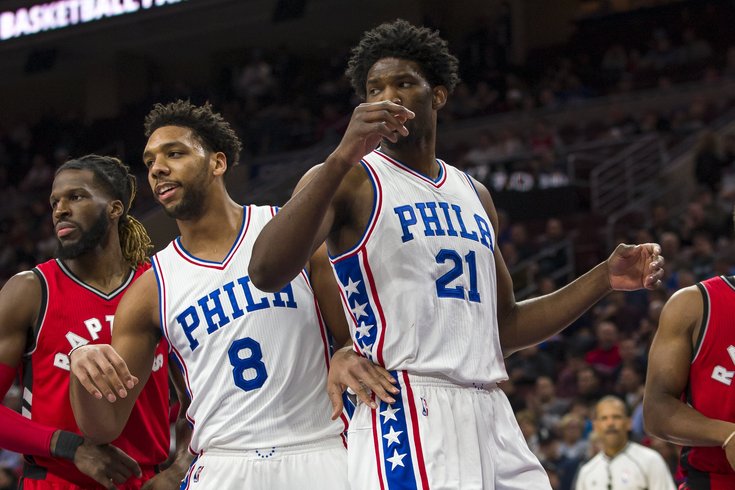 Philadelphia 76ers center Jahlil Okafor, left, and center Joel Embiid were both in the starting lineup for the first time all season on Wednesday night.

It was like the time you and your family departed the ol’ family truckster and feasted your eyeballs on Mount Rushmore.

For the first time all season, Ben Simmons, perhaps a month away from the court, was on the Sixers bench. On the court, fellow top-three lottery pick bigs Joel Embiid and Jahlil Okafor started a game together for the very first time on Wednesday night.

The Mount Rushmore analogy fell apart, sadly, when Nerlens Noel, back on the injury report with a left ankle sprain, wasn’t anywhere to be seen until the game's final minute. For shame.

But the great Sixers experiment is underway and continues to get more interesting with each passing night. Someday soon, perhaps, they won’t have to invite Julius Erving or Allen Iverson back to ring a fake Liberty Bell at half court before the start of a game.

On Day One* of the dueling big men show, however, the former Duke standout looked comfortable and the early favorite for NBA Rookie of the Year honors looked a little lost in the Sixers' 123-114 loss to the Toronto Raptors.

*At least in terms of starting together. The first extended look at the duo came in the Sixers' 105-88 loss to the Magic on Dec. 3 at home.

"I think for once, since I’ve been a Sixer, I didn’t trust the process tonight," said Embiid, who took just six shots.

While Okafor scored 17 points (on 6-for-9 from the field) Embiid scored a season-low nine points. He turned the ball over in the game's opening two minutes, getting pick-pocketed at the top of the key, and he finished without double digits in either points or rebounds for the first time in 25 NBA games.

The Embiid-Okafor duo played 17 minutes together on Wednesday, not as much as Brown had planned. But it wasn't because of Embiid but because Toronto decided to feature a four-guard offense more often in an attempt to exploit the Sixers defense.

"You can see where many people think it’s a perimeter driven league, it’s hard to guard those guys when they’re putting four guards on the floor a lot," Brown said. "It is a challenge to find responsible matchups when you decide to play those two, there needs to be layers to that decision. ... All of us would admit that Jahlil had a bounce. He was running around, it looked like he had an extra speed and enthusiasm. I thought he probably reaped the benefit of this first opportunity to do that maybe more than Joe."

The Sixers’ big man situation will play itself out in the coming months, with Noel as the very strong early favorite as the odd-man out. He’s a restricted free agent who hasn’t exactly warmed to his current, crowded front court situation (and who also apparently doesn’t have much value on the current trade market, either).

It’s likely that the next Sixers team to advance to the postseason will be one that can find a way to maximize the respective talents of Embiid and Okafor at the same time. Brown, who has had the thankless job of guiding the team through whatever the last three seasons were, saw an opportunity to get that process going on Wednesday against the talented (and tall) Toronto Raptors.

“For the first time in my eyes we have the opportunity to do that with (Jonas) Valanciunas and (Pascal) Siakam, you really have a chance to justify it, like it’s not a reckless decision,” Brown explained before the game. “It’s a responsible decision defensively, it’s stuff that we’ve talked about for a long time, it’s stuff that it’s my job to grow our program and grow our guys and see what we actually have. We’ve really yet to see Jahlil and Joel in a significant time frame. Tonight it’s available, so I’m going to do it.”

Before the festivities got underway, Doc was there to ring the bell in place of the Answer and the question that everyone had been asking for months was finally going to be investigated: how will Joel and Jahlil play off of one another?

Like Sixers basketball in general this season, it was exciting to think about.

“Very much so,” Brown said. "It ties into the same question that we started all of this with and then some because I’m excited to look at it. We have two 22-years olds in Joel and Nerlens; tomorrow Jahlil will turn 21. And so if we all take a deep breath and recognize that number, and then drape it over a man’s world, an NBA world, they’re just in their infant stages, and so are we. It’s my job to uncover (the) what do we have.”

What they have are two young players opposing coaches are going to have to start being wary about as they improve their respective NBA games.

“They’re both different, Toronto head coach Dwane Casey said. “Embiid’s skill right now is facing you up … like a younger Tim Duncan. And he can also shoot the three. Okafor is more power, coming at you, spinning in the paint. Both of them are different, but with special skill sets. … I just don't want them to find each other tonight.”

On the offensive side, their skill sets would seem to complement each other. Okafor in the paint using his post-up game and Embiid roving around creating mismatches and space on the court. The Sixers grabbed an 11-7 lead early with both chipping in, Okafor with an easy layup, Embiid getting the foul line on one end and blocking a shot with authority on the other end.

In the opening minutes of the second half, the 14-foot duo got together on a play, with Embiid faking a shot in the lane and dishing down low to Okafor, who dunked for two easy points. Minutes later, they tried the reverse of that play on for size and Embiid missed a three-point shot.

"I think I saw a learning process," Okafor said. "I was just trying to do everything I can to make it work. I know we’ve talked to coach a lot about pairing me and Joe. I’m just trying to do my part to make sure it works out, help my team in a positive way."

As Wednesday night's game drew to a close and the Sixers attempted one, final spirited run, Simmons stood behind Okafor during a timeout. Noel emerged next to the 2016 top pick.

Soon, the Sixers coach will have even more roster manipulations to work through his head ... along with trying to keep everyone content, too.

Look at the hustle from Embiid as he hurls himself into the second row. #SixersTalk https://t.co/GrO4mm3dzz

And if and when that initial excitement gives way to winning games more regularly, Brown will really have it all. The 55-year-old coach is more than ready.

When asked if putting together these new big man pairings is in the name of development or winning, Brown answered it the only way a coach who has lived through so much losing could.

“So this isn’t done in a way that I think initially hurts that. There will be times in the third period, in the fourth period, with seven minutes left and it’s a close game, you can remember that question. I’m going to have to figure out what’s best to win a game. And so I will genuinely hope to pull it all off.

As Embiid found out Wednesday, it's no longer a process as much as a work in progress. And progress is impossible without some struggling along the way.