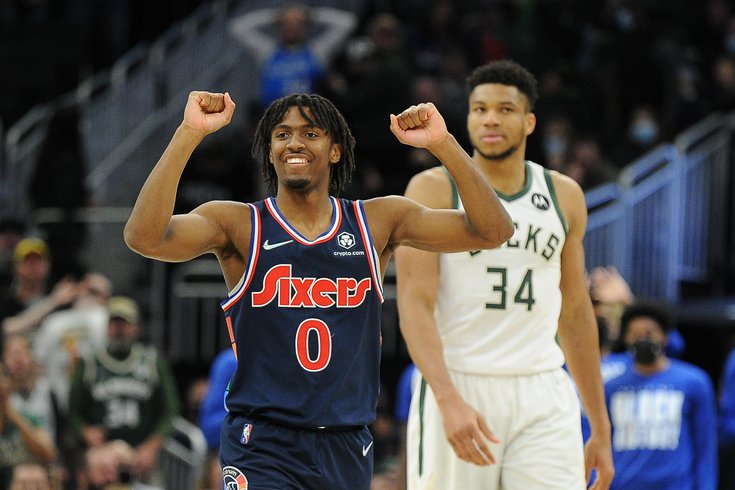 At the 4:56 mark of the second quarter on Thursday night, the Sixers were down 12 points and reeling in Milwaukee. Hours away from the All-Star break and days removed from an embarrassing loss on their home floor, it would have been no surprise if they packed it in and saved their best effort for James Harden's assumed return next week. What they did instead was earn one of their best wins of the season, a 123-120 road victory over the Bucks to push them into the East's No. 3 spot ahead of the stretch run.

The star of the show, as usual, was Joel Embiid, who lifted Philadelphia to victory with another 40+ points in a spot where they needed every last one. But head coach Doc Rivers had an outsized role in this victory, even with some correctable mistakes made in both halves of the game.

Philadelphia's starting lineup of Embiid-Niang-Harris-Thybulle-Maxey looked a bit strange on paper, but the part that ended up going wrong was unexpected. Georges Niang had one of his best games of the season, playing credible defense on Giannis Antetokounmpo while making five threes on the other end of the floor. It was Thybulle who was completely off the pace, a non-factor on offense and with none of the juice he normally has on defense.

Left with a choice to let it ride or shake things up, Rivers decided to abandon Thybulle and prioritize spacing for the rest of the night. Looking at the court during Thybulle's time on the floor, it wasn't especially hard to see why. Milwaukee absolutely loaded up in the paint while he was in the game, throwing a wall in front of Embiid and cutting off realistic driving lanes for Maxey. Though Thybulle has done some damage as a cutter over the last two months, the lack of fear he strikes as a shooter allowed the Bucks to pass him off between defenders on the baseline during most of his time on the floor, with Thybulle moving harmlessly between corners during his shifts. He managed to get just one shot up in 14 minutes of action, a missed three Milwaukee was likely happy to see go up.

That was enough for Rivers to go with a different group, evidently. Furkan Korkmaz is in the midst of a poor shooting season himself, his worst since his rookie season back in 2017-18, but teams continue to respect him as a floor spacer anyway. For Rivers, that was enough, as it allowed the Sixers to run actions and move players around in an effort to provide Embiid and Tyrese Maxey with a runway for success.

The duo immediately found success running middle pick-and-rolls toward Maxey's dominant right hand, with shooters (Korkmaz and Niang) in either corner and Harris in the dunker's spot. Maxey was able to turn the corner quickly, and with Niang being hugged in the strongside corner, it was his speed vs. help coming from the weakside, a battle which Maxey ended up winning quite a bit at the end of the first half.

Over and over again, the Sixers ran this play until Milwaukee proved they could stop it, which didn't end up happening until early in the third quarter. By that point, the Sixers had rolled to a double-digit lead, providing them with enough cushion to pick up a big road win.

While Doc Rivers has faced plenty of criticism for inflexibility with his rotations, Thursday night's game provided examples of where his "Don't fix what isn't broken" philosophy adds value during a long regular season. Rather than going back to the group with Thybulle out of halftime, Rivers opted to stick with shooting, leaving Korkmaz in with the starters and eventually rolling with him in crunch time. He wasn't the only shooter who got an opportunity to run with the starters ahead of Thybulle against Milwaukee, with Shake Milton also getting a chance to play critical minutes in the fourth quarter last night.

In those minutes, you can see the makings of what this team might look like once it's James Harden running the show instead of Tyrese Maxey. One of Niang's only poor moments of the night was an airballed three early in the fourth quarter on a pass that he can expect to get from Harden on a regular basis. With Maxey going left off of an Embiid screen, he fired the ball against the grain to find his shooter in the corner for a clean look at the rim.

(This pass, by the way, is something we've seen pop up more frequently for Maxey lately. If he was tasked with being the full-time PG in a world where they don't make the Harden trade, it'd be a huge development that alters our long-term thinking on him and the team. As it is, it's still a pretty huge deal, a display of what he can do when you clear space for him and let him go to work. Expect to see this against second units in the future.)

Evidently, Niang got a bit of coaching up from Harden on the sideline during this one, following early turnovers on drives to the basket. In a conversation on the sidelines, Harden reminded him to stick to what he does best.

"Try to get up 10 threes. That's what you do," Niang said Harden told him. "Note to self: take note from James Harden."

Soon enough, Philadelphia's entire ecosystem will revolve around the Harden/Embiid partnership, which made Thursday's pre-break finale somewhat of an interesting litmus test for how Doc Rivers might choose to set this group up. As important as Thybulle is to this team defensively, clearing space around their star duo is going to be a top priority, and Rivers took that to an extreme throughout this game, even rolling with Paul Millsap at backup five rather than Paul Reed, despite the latter's success defending Giannis Antetokounmpo in a matchup earlier this season.

The reality of the situation is that Harden and Embiid are going to face double teams and extra attention no matter who else is on the floor, but they're going to be better equipped to pass out of them and succeed if they have reliable options surrounding them in the middle. When Embiid can make a simple read against pressure and create a quality look for a good shooter, that's basically the holy grail for Philadelphia's offense.

They don't have much time to put this project together, but the Sixers executed on every front on Thursday night, providing just a little extra hope that they might be able to make some noise in April, May, and June.