Eytan Shander: Enjoy this Sixers team — it's the one you've been waiting for

With James Harden paired up with Joel Embiid, The Process has come full circle. Now, it's time to win. 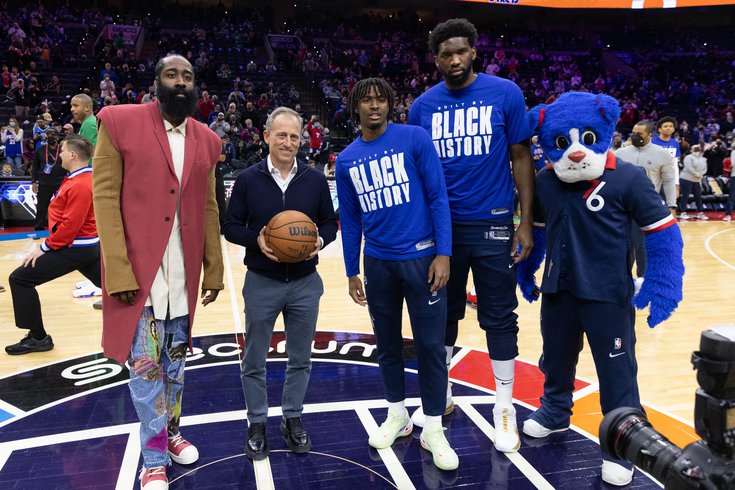 It’s the new thing in South Philadelphia, provided by the 76ers as they boast the league’s MVP frontrunner along with one of the most prolific scorers in history — and a former MVP himself.

There are certain accomplishments in sports that demand our attention as much as our elation. Winning a championship is the most tangible way to define success, but it’s far from the only way. It’s defined in journey as it is in destination.

We’ve already seen things from Joel Embiid that haven't been done since Wilt Chamberlain. Wilt Chamberlain! The combination of James Harden and Embiid should raise the number of “Did you just see that?” moments in this city to historic levels. Daryl Morey acquired a player to make the Sixers a “generational experience” for fans to tell their children’s children for years to come.

In other words, it's going to be a lot of fun.

This team now presents the biggest 1-2 combo seen on the hardwood in Philly since Chuck and Doc were blessed with the arrival of Moses Malone. No shade to any player who has come through since – like Allen Iverson – as we’ve seen ridiculously talented Sixers since 1984, but there's never been anything like this duo, like what will be seen in the final stretch of the season and into the playoffs.

During The Process, the entire Sixers team – marketing, front office, the guys on the floor, etc. – aimed to truly put on a show. Pyrotechnics, performances, even crazier than normal ways for fans to get involved. No matter how heavy your disdain was for the actual process, the team undeniably went out of their way to reward the 6500+ fans who showed up.

Fast forward to the first game with James Harden and Joel Embiid. This is why you were patient for so long, to see the culmination of a duo – or trio – of top players come together in our city. It's finally happened. Not to mention that long the way the team discarded a ghost in return for a scorer and equally as good of a passer, at the very least.

Ben Simmons had a shot to be part of something big, and although the subject of his mental health took over the fake world of social media, his real-world experience offers much more. Simmons was overwhelmed with how much we care about something whenever we – as fans – invest our time. The greater the chance of something happening, like making the playoffs or winning the division, the larger the expectations.

All things you already know, but how long has it been since you’ve truly felt it? A couple of years? Doug Pederson’s second-to-last season? The Raptors series? The Hawks debacle? The level of disappointment with the team’s exit last year was a fraction of what it will be this year if they fail to make a deep run.

I don’t care who you blame. This thing will be looked at as a colossal failure (even though it was the only move to be made) and Harden will surely be targeted based on his team-jumping history.

That’s not what this is about. The arrival of Harden brings championship aspirations, tangible hope that brings us back to the spotlight.

The trade was a calculated plan to preserve hope for this season, on top of anything Embiid personally accomplishes. By doing so, the trade also reignited what makes us – as fans – a unique bunch in sports. There’s a significant difference in being royally disappointed that the Sixers don’t, at the very least, represent the Eastern Conference versus calling for people’s jobs and massive trades.

The over-the-top hammering of moving everyone who isn’t nailed down with a large contract is boring, tiring, and nonsensical. That doesn’t mean a move can’t be made, or a coach can’t be upgraded. No, the level of disappointment that will come with this Sixers team falling short is born out of a level of care for any team that hasn’t been felt since truly 2017 – as those expectations changed due to extenuating circumstances.

This is the best thing that could have happened to Philadelphia, and it comes with a major risk, or responsibility. There is nothing wrong with that, nor is there with how we react to moves like the Harden trade. It’s the clearest sign you will ever get from anyone in any front office about how aggressive they are about winning a championship.

Morey hit the trifecta. He broadcast to the world his most serious intentions of winning the NBA Championship, paired two players who will do things you’ve never seen before, and returned to us our true pulse as a Philadelphia fan. To live and die with the Sixers again.

It's really all we've ever wanted.

A quick one on Ben Simmons – more so the people responding to the Simmons story. The more we acknowledge people with larger/national platforms who use us for their own good, the more this will continue. It’s down to a science. Someone or some network will play nice with Philly – even turning into a token Philadelphia sports fan. In the case of Simmons, most of these people ripped him to shreds while he was still getting support from Sixers fans.

As we’ve seen this past week, once the narrative no longer works in their favor – like ripping Simmons because everyone in the country was doing it – the revisionist history begins, and the network (personality) turns on us. It happened with Fultz. It happened with Simmons. It will happen again.

Just know these are calculated plans based on our ability to jump whenever someone says something positive and jump even higher when they flip the script.