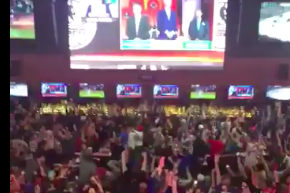 For just the third time in franchise history, the Philadelphia 76ers hold the first overall pick in the NBA Draft. It took a valiant level of sustained misery to secure such favorable odds, but the team now has a shot to land a marquee player at a draft position that formerly delivered Allen Iverson and Doug Collins.

Over at Xfinity Live, Sixers fans attending the 2016 Rights to Ricky Sanchez Lottery Party thunderously rejoiced at the outcome of the Lottery. The event is a tongue-in-cheek tribute to Puerto Rican Center Ricky Sanchez, whose rights the Sixers held for five years between 2007 and 2012, only to trade them to the Grizzles for forward Sam Young.

Here's how that worked out: Young played 14 games for the Sixers in 2012, averaging 2.9 points and 1.5 rebounds. He did, however, record a scorching .625 three-point percentage. He now plays for the Cañeros del Este of the Liga Nacional de Baloncesto in the Dominican Republic.

But who cares? The Sixers have the number one overall pick! Here's the reaction at Xfinity Live and on social media.

. @Ike58Reese is in the house wearing a Rights To Ricky Sanchez shirt. Incredible.

Hope they rope off Xfinity Live and turn it into the first FEMA camp.

A "Trust the Process" chant at @XFINITYLive (Via @_JohnB21) pic.twitter.com/7TnsgaKtzI

That was INSANE. Feel like I was at a concert my ears are ringing from the noise at the @RTRSPodcast party at @XFINITYLive. #1 pick!

To those who say former GM Sam Hinkie will live in infamy, behold, the light of the Process has finally shined on Philadelphia.