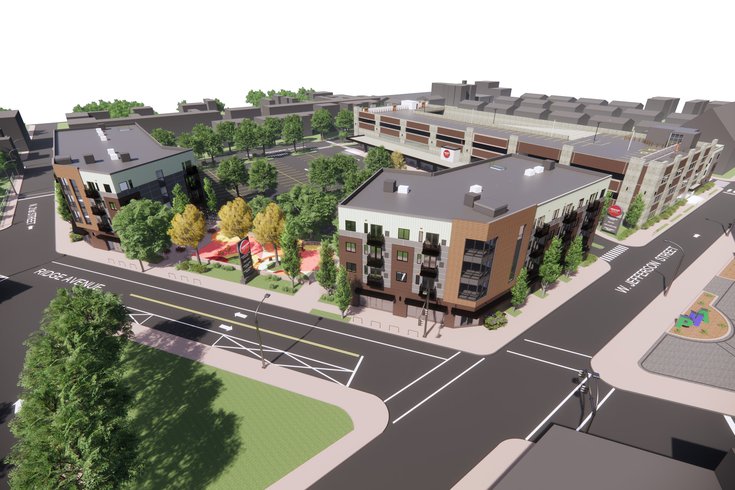 The Sixers provided a $100,000 grant to help promote home ownership in the Sharswood neighborhood of North Philadelphia, a sum that was matched by the William Penn Foundation. The grant is part of team owners' commitment to racial equality, and they previously have invested in the neighborhood via the Sharswood Ridge development, a rendering of which is shown above.

The Philadelphia 76ers, as part of Harris Blitzer Sports & Entertainment’s commitment to racial equality, is helping promote homeownership and wealth creation in the Sharswood section of Philadelphia.

The Sixers presented a $100,000 grant to financial services agency Clarifi on Monday, according to a statement from the team. The grant has been matched by the William Penn Foundation’s Family Recovery Fund, to bring the total to $200,000.

Alongside the grant, the Sixers ownership group Harris Blitzer previously invested in Sharswood Ridge, a mixed-use development near Jefferson Street and Ridge Avenue that broke ground in October 2020. In collaboration with the Philadelphia Housing Authority and Mosaic Development Partners, Sharswood Ridge will include 98 mixed-income rental units, a bank, a supermarket, a restaurant, and an urgent care center.

Clarifi, founded in 1966, is a financial agency working with residents of Philadelphia and Delaware counties to enhance financial literacy and provide plans for people looking for help buying a home, repairing their homes, or avoiding eviction or foreclosure.

The company provides step-by-step counseling to clients, and through their partnership with Lower North Philadelphia Community Development Corp. and its work in collaboration with PHA, Clarifi has been able to provide those services to a larger community of clients.

Clarifi Executive Director Steve Gardner added to the Sixers' statement on the grant, remarking that "homeownership is one of the very few sustainable avenues that families, especially families of color, have to build and pass on wealth to the next generation."

As reported by Pew Charitable Trusts, mortgage rates for homeowners in Philadelphia are lower, on average, compared to most other cities in the United States. Clarifi’s mission to combat displacement and promote homeownership may help to ease the tension caused by increased rental prices in communities throughout the Philadelphia area through new development.

"Over the past decade, North Philadelphia, which is home to many of the city’s low income residents, experienced a larger increase in rents and cost-burden … than any other section of the city," according to Pew.

Sharswood is one of the city’s most impoverished neighborhoods, according to Darnetta Arce, Executive Director of the LNPCDC. "(LNPCDC) is working to empower residents with the tools to understand their value to acquire affordable housing, build financial stability, and to build a legacy of wealth in order to keep black communities vibrant," she said in the Sixers statement.

Through the use of the grant to promote homeownership and provide housing counseling in the Sharswood area, Clarifi and its partners hope to help mitigate the risk of displacement of residents through foreclosure, eviction, or increased housing costs.