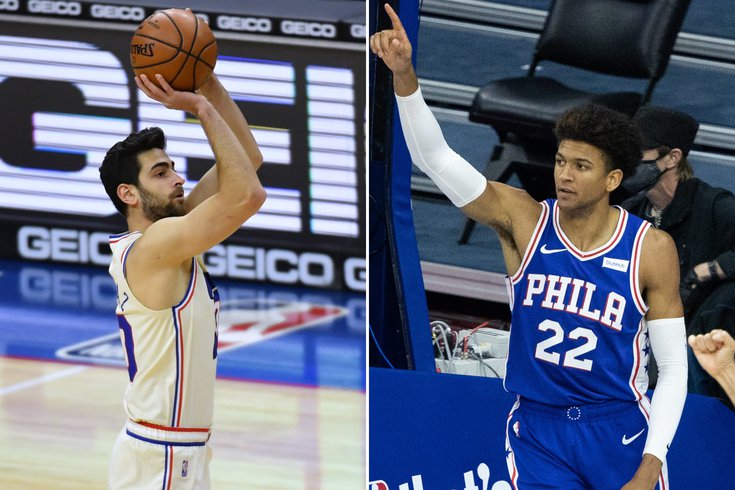 Who should fill in for Danny Green: Furkan Korkmaz, Matisse Thybulle or someone else?

Almost everything went right for the Sixers in their Game 3 win over Atlanta. Joel Embiid handled double teams at a master's level, Ben Simmons came alive for a huge third quarter, and Tobias Harris filled in the gaps all night, showing off some of the best playmaking we've seen in his playoff career. But the sight of Danny Green in a walking boot was a huge downer, and Doc Rivers did not exactly inspire hope when discussing Green's predicament late Friday night.

"It's a calf injury, just my doctor's degree I would tell you calf injuries aren't great," Rivers said. "I'm not ruling Danny out, but I'm pretty much ruling him out. I doubt if he plays in the next game."

UPDATE: Danny Green will miss the next two to three weeks with that calf strain, according to Shams Charania of The Athletic.

That obviously means that the Sixers starting forward will miss the remainder of the Hawks series, and if the Sixers advance, he'll miss at least part of the Eastern Conference Finals. How much depends on whether Green's recovery time is closer to that two- or three-week number, not to mention how long both of the East semifinal series go. In other words, Sixers fans should be rooting for Bucks-Nets to go the full seven games.

We'll have more from the Sixers' media availability following Sunday's practice if there's any update on Green, so stay tuned...

This means the Sixers will need to round out a starting lineup that has been firing on all cylinders all year. Who's the best man for the job? It could very well be the guy who had a big night off of the bench in Green's absence.

There were questions about whether Korkmaz deserved to be on the court for Game 3. He was one of the worst players in the rotation in Game 2, and Doc Rivers could have easily decided to go away from his bench shooter in service of putting more ballhandlers (or defenders) on the floor.

But as Korkmaz explained as only he can after the Game 3 victory, it can take some time to find your footing in a series.

"First games they will tell you every time, you're the fish coming out of the water, sometimes you don't know how it's going to be. You are too much hyped, sometimes you are not, I think that's why Game 1 is every time tricky," Korkmaz said. "But Game 2 and Game 3, we were confident, we knew what we needed to do and we did it."

Korkmaz found it in a big way against the Atlanta Hawks, scoring 14 points off of the bench and providing the latest example of Philadelphia's next-man-up mentality. Once Danny Green was ruled out, the Sixers needed to replace his shooting in some form or fashion, and Korkmaz is the guy who managed to do it.

All season, Korkmaz has had some of his best moments when he has been asked to fill in as a spot starter. When Korkmaz is on the floor in place of either Seth Curry or Danny Green, the Sixers have absolutely destroyed opponents on both ends:

Those are world-beating numbers, albeit in a small sample, and they have continued on that path in the postseason. That doesn't say as much about Korkmaz as it does about the Sixers' big three destroying teams together, but you would be surprised how dramatic the swing is when other bench players are paired with that group. Lineups that combined Embiid, Simmons, and Harris with Thybulle, for example, were massively negative in the regular season, -16.1 points per 100 possessions according to Cleaning The Glass, ranking in the bottom five percent of all lineups played in the NBA this season. Because of how the rotations worked, that group didn't have a whole lot of time to prove their worth either, but being bad on offense with the Simmons/Thybulle pairing on the floor is intuitive based on what we know about them in other lineups together.

Korkmaz brings something to the table that few players on the roster are able to provide — movement shooting. Green is a sniper from the corner and as a standstill player, but the Sixers don't and shouldn't ask him to come flying around picks for shot opportunities. While he's not a static cover, Green predominantly moves from corner to corner along the baseline, simplifying one part of defending the Sixers.

With Korkmaz in his place, the Sixers add a bit more movement. When you combine Korkmaz's shooting touch with his height, he's a tough guy to deal with coming around those screens, which the Hawks found out the hard way in Game 3:

By moving Korkmaz into the starting lineup, you can provide him with the most defensive help he can get at one time while making sure the first unit still has plenty of shooting around them to start the game. And Korkmaz is a better defensive player now than he has ever been, so that first point isn't necessarily as critical, at least in this series. Korkmaz is the easy answer here, and likely the correct one.

When Green went down on Friday night, Rivers' mind drifted first to his defensive ace in the hole. That's an understandable place for the mind to drift, and the long-term hope should certainly be for Thybulle to lock down a spot in the starting lineup as he grows on offense.

Defensively, it's pretty clear what this kid brings to the table. Putting Simmons and Thybulle on the floor at the same time can simply feel overwhelming for the opponent — just when you think you've escaped from one guy, the other drops down from the rafters and sends Philadelphia on a fast break the other way. Some defenders get by on effort, others on tools, some even on knowledge of scheme and opponent. Thybulle combines bits of all three, making heroic saves in transition and creating turnovers even when he's just waiting in the right spot to cut off the next outlet.

The million-dollar question is whether Thybulle can bring enough to the table on defense to justify the impact his presence has on offense. Atlanta sat in a 2-3 zone at times in the second half of Game 3, and Thybulle was able to make them pay for it with a corner three when they basically dared him to shoot. But it seemingly doesn't matter how many he puts up or even makes, because if a Thybulle corner three is the end product of a Philadelphia possession, that's a much better result than dealing with Embiid one-on-one or Simmons posting up the likes of Danilo Gallinari.

As noted above, Thybulle playing with the core trio has not gone well for Philadelphia in limited opportunities this season. It certainly didn't look great in the early stages of Game 3, at least on offense, though a lot of the issues there were execution errors rather than a product of clunky fit.

The other potential issue if you start Thybulle is leaving yourself susceptible to rotation changes from the Hawks to get Trae Young going. As it is, the Sixers can basically throw one of Simmons or Thybulle at Trae Young for 48 minutes since their minutes only partially overlap at the moment. Atlanta might not be able to change their patterns to get Young completely free, but depending on how Rivers subs it, Young could end up forcing one of them back up off of the bench before they get a full rest if they start together. It's something to keep in mind.

Select from the pool of guards

The other option feels like the least likely choice for Rivers. Can you trust any of the Maxey/Milton/Hill group to step into the starting lineup right now, given what they've offered in the playoffs up to this point? I would argue no.

Hill is where I would have looked coming into the postseason, with the expectation being that he would eventually steal some crunch-time reps from Seth Curry. Not only has that not come to pass, Hill has looked out of sorts running the second unit, overburdened as a creative force with limited players around him. Chalking it up to age slowing him down doesn't cut it, because a lot of Hill's errors right now come down to mental sharpness, and that's not something you can "protect" by way of sticking him alongside the other starters. The best version of Hill would deserve a place in the starting lineup, but that's not the Hill they've gotten.

In a roundabout way, maybe that's a good reason to stick him in there. The Sixers will almost certainly need a better Hill down the road in the playoffs if they can get through this series, and giving him a larger margin for error surrounded by the starters could be the key to unlocking him. To a lesser extent, you could say the same of either Milton or Maxey, who have had shining moments already in these playoffs.

But my guess is that Rivers will leave this group alone. They each offer something wildly different than Green, and while that could be a positive in the right context, the Sixers are almost certainly not trying to fix or tamper with a machine that is already firing on all cylinders.