Why were the Sixers so bad against Miami's zone defense?

The shorthanded Heat came out in a zone against Philly, and Joel Embiid and his teammates didn't seem to have an answer. 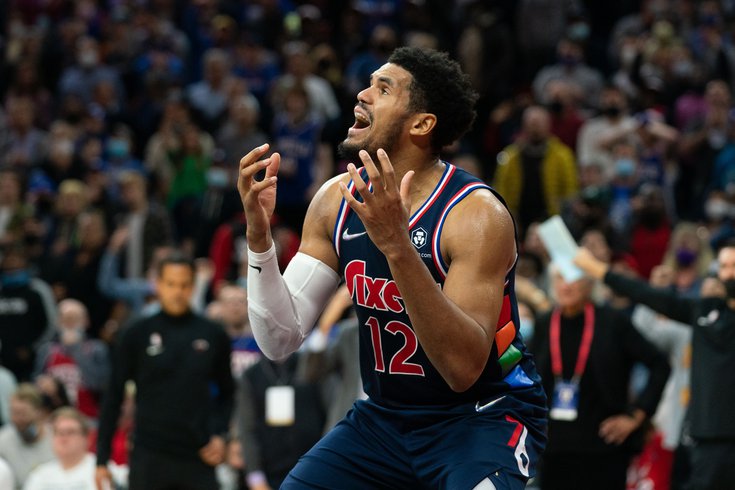 Everybody, including the sharps, expected the Sixers to roll the Heat's undermanned team on Wednesday night. With Miami missing Jimmy Butler, Bam Adebayo, Tyler Herro, and multiple role players on top of that, Philly seemed to have the ideal setting for a beatdown on the front end of a back-to-back.

Someone forgot to tell the Heat, who rolled out a zone defense on their first possession of the game and never looked back. It was not the only thing behind Miami's victory, but it loomed large, allowing the Heat to build multiple big leads before the Sixers would eventually make it a game in the end. Philadelphia's post-game message was all about the self-inflicted part of the problem, dwelling on their poor execution on offense.

"The ball just stayed on the outside. You got to get into the paint," Doc Rivers said Wednesday night. "It was not different in the second half when they ran zone, and then all of a sudden, we got everything we wanted. It was just disappointing.

"We got every shot we wanted in the second half running the same stuff. We didn't change our offense. We ran the same stuff, the difference was we didn't settle, we didn't hold the ball, and we went downhill, and the first half, I don't know what that was."

Relying too much on east/west movement has been a problem for the offense for a lot of this year, in part because of what they run and in part because of who is running it. Save for Tyrese Maxey, whose downhill exploits were their best offense all night, the Sixers lack anyone with the speed or ballhandling ability to consistently put pressure on the rim. It is the area where they most obviously miss Ben Simmons, his shying away from the basket in the playoffs aside.

The ball staying on the outside is a problem for sure, but who is on the outside also matters. If you have four willing, capable shooters around Embiid in the paint, you can use quick touch passes to spray the ball around the perimeter and find a decent option every time. That's not how the Sixers set up — with Matisse Thybulle starting both halves, the Sixers had a lot of possessions that wasted time until they got a clean look for the shooter Miami was happy to let rip:

Nobody threw Thybulle under the bus after the game, but his -23 and the lineup numbers tell the story for him. The Sixers' starting lineup drops from around the 70th percentile with Danny Green in the fifth spot to the first percentile with Thybulle in that spot, ranking among the very worst five-man groups in the league. Over an extended period of time, the poor defense they're playing with Embiid/Harris/Thybulle/Curry/Maxey would probably tick up a bit, but playing Thybulle with that group is constantly daring the other team to ignore him and make life more difficult for everyone else.

Embiid certainly feels that personally, as the guy who sees constant doubles and sees pressure tilt his way even in optimal circumstances. Getting him the ball at all was a problem against Miami, one Embiid wasn't happy about after the game.

"Obviously, they played zone all game," Embiid said. "Add that with not being able to make shots and couldn't catch the ball in my preferable areas of the floor, yeah, so."

"I'm looking at the third quarter, I think I touched the ball maybe once or twice because they kept overloading the side I was on. That caused a lot of wide-open shots. I've been saying it all year, it's not the first time. We need to shoot them, we need to shoot a lot of them, and obviously, we've got to make them."

Embiid would get his first shot attempt of the third with only 1:23 remaining in the quarter, a three he shot in transition after capturing the defensive rebound on the previous possession. The big man and Rivers both noted after the game that they needed to get him more post touches, and it's hard to disagree with the assessment. When the Sixers got him the ball on the block, Embiid responded by using the attention on him against Miami. This isn't even a good spot for the big guy to get the ball, but they're dead when he hits the cross-court pass over the top with Dedmon sitting in the paint:

Unfortunately, as the big guy noted, getting touches at all was problematic. The Sixers are short on good entry passers even at their best, so it's not a surprise they were spooked by the concept of throwing passes into a spot where Miami could converge on the ball.

Embiid had his own issues in this game, mostly related to actually giving a damn about an opponent he took lightly. But not getting the ball in the post seemed to irritate him more as time wore on, his effort fading the more he watched teammates throw up bricks without ever getting a touch. Less than a minute after the Thybulle brick seen further up the article, look at Embiid's lack of movement and effort on the next possession, the big fella barely pretending to care:

To be clear, I could cut five more clips where Embiid makes a valiant effort to post and never touches the ball. This game was not strictly on his shoulders. But whatever you think about Philadelphia's overarching approach to this game — the strategic choices, the lineups, the state of the roster because Simmons is eating fines rather than playing basketball — the team's franchise player simply cannot lead like this. If you and I can see it in the arena and on TV, the guys alongside him certainly see it happening right next to them. And yes, his teammates have to own their part of the blame for Embiid getting there, for possessions like these where they're playing a glorified version of the "four corners" time-wasting offense popularized by Dean Smith at UNC, hated by everyone who doesn't have powder blue in their wardrobe.

The only guy who broke up the monotony against Miami was Tyrese Maxey, who looked excellent against the Heat by refusing to succumb to the zone. Maxey would finish 11/15 from the field for 27 points, picking up three rebounds and five assists along the way. Maxey told reporters Rivers came to the team in the second quarter and once again at halftime to reinforce the value of driving against the zone.

"They have a tricky zone, it's not a traditional 2-3, it's a little matchup, and they're just flying around," Maxey said Wednesday. "If you can get into the gap and then spray off for threes, and then we get kick-outs and 'one mores' from there."

This game was a death march, and Maxey provided some of the only watchable content of the night for Philly, zone or no zone. They sent a lot of ball screens his way in the second half, and one from Andre Drummond produced the move and finish of the game, with Maxey splitting two guys and then scoring through contact at the rim.

Still thinking about this play from Tyrese Maxey pic.twitter.com/lEyRmZRVbb

Unfortunately, Maxey's best was not enough to get Philly a win. And as Embiid acknowledged afterward, they buried themselves early, never quite climbing out of their ditch.

"We can't put ourselves in a hole to start the game. We didn't respond until the last couple minutes of the third, and obviously, we made a push in the fourth," Embiid said. "It looks like they affected us with the zone, and we just, whether it was just couldn't catch the ball in the post or we couldn't make any threes, we got to start off with the mentality to try to win the game."

With zone offense this bad, all the mentality in the world might not have been enough. There's simply no excuse for the Sixers to look this out of sorts in the face of zone defense.